Dan Walker’s had a jam-packed six years on the show (Picture: BBC/PA)

Dan Walker is saying goodbye to BBC Breakfast this morning after greeting the nation for six years and we’re going to miss him.

The 45-year-old presenter will front his last show on the programme today before moving to Channel 5 where he will replace Sian Williams as the lead anchor on 5 News.

Since taking over from Bill Turnbull in 2016, Dan’s been a delight for viewers starting their day, and he’s given everyone plenty of hilarious moments over the years.

From dropping C-bombs and accidentally holding up racy photos to breaking the set and everything in between, it’s been a wild ride – and who could forget his rivalry with Good Morning Britain alumni Piers Morgan?

In honour of Dan’s final BBC Breakfast appearance, we’ve taken a look back at some of his funniest and best moments.

Thanks for the memories!

Naga Munchetty couldn’t stop laughing in October 2020 when Dan took on a Children In Need Act Your Age challenge.

Dan and co-star Louise Minchin were taking with getting to 95 skips the fastest – their combined age – while Charlie Stayt had to scramble some eggs in 58 seconds, and Mike Bushell space hopped over 54 hurdles in his garden.

Never one to back down, Dan gave it a good go – even if Naga reacted with a bunch of crying laughing emojis on Twitter.

Anything can happen on live television – and thankfully for those of us who enjoy some awkward mishaps, that can mean plenty of embarrassing moments for the presenters.

We all love a bit of accidental swearing on telly, and Dan has fallen foul to the classic in a big way in the past.

Back in 2017, he was left red-faced when he was trying to say country and culture but accidentally blended the two – happens to the best of us!

Dan’s always been a good sport – and he took this amazing moment in his stride when World’s Strongest Man Eddie Hall hoisted him up to the heavens.

He was clearly keen, as he asked Hall: ‘I’ve got a feeling I need you to bench press me. Do you think you could do it?’

Following a successful lift amid some slight wobbles, Eddie remarked: ‘I think we should’ve practised this beforehand, eh?’

Dan’s clashes with Good Morning Britain rival Piers Morgan could be a list all on its own, with the pair crossing each other plenty of times over the years, whether it was lighthearted jabs about ratings to arguments about mental health and political interviews. 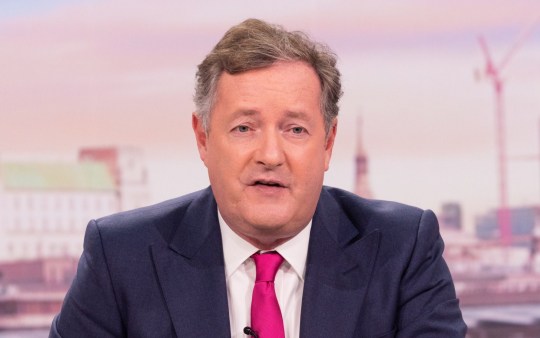 However, he has admitted he actually missed their ‘back and forth’ after Piers left GMB.

He suggested their rivalry ‘was healthy for both programmes’, and explained: ‘I never shied away from a bit of competition and it’s good, it keeps you on your toes as well.’

In 2019, Dan tried to show his co-host Sally Nugent an image of a Yorkshire pudding that resembled a dog that he’d discovered when flicking through this morning’s headlines, but failed to realise what was printed on the back. 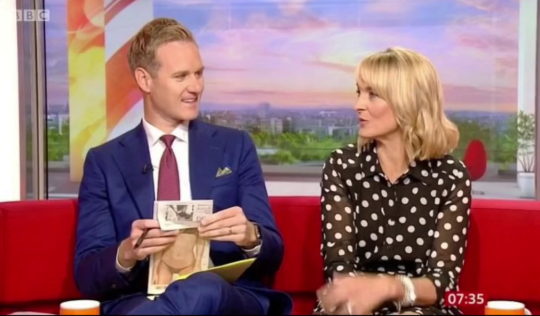 Anything can happen on live TV (Picture: BBC)

Before he revealed his findings, he held at the back of the cutting at the camera which gave audiences an eyeful of a model in her bra and knickers.

Thankfully, he saw the funny side and later tweeted: ‘Note to self: ALWAYS CHECK THE BACK.’

Breaking the studio with a TikTok dance

TikTok trends usually break the internet – but Dan clearly didn’t get the memo as he accidentally targeted the BBC Breakfast studio instead. 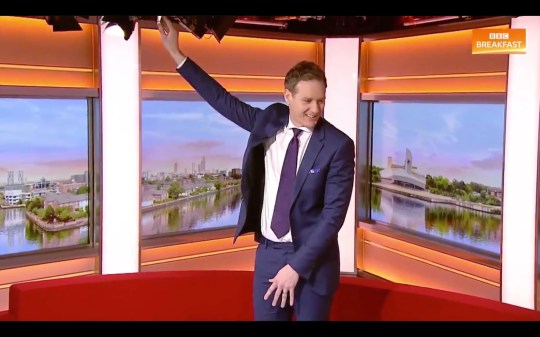 Last year, the BBC News theme song became an unlikely craze sweeping the social media app, and naturally as a hands-on journalist, he had to get involved.

He was interviewing the three girls behind the routine as Louise Michin filmed him on her phone, and he was actually doing well into he went for a disco-style point to the sky.

‘I’ve just punched the light in the studio,’ he laughed, apologising to the crew before later adding on Twitter: ‘Nailed the armpit sniff… The light has been fixed.’

BBC Breakfast airs weekdays at 6am on BBC One.