Rachel Riley opened up about her experience on the show (Picture: Getty Images)

Countdown star Rachel Riley has said she was groped backstage on the Channel 4 show by a male audience member.

The presenter, who’s starred on the show since 2009, said occasionally fans have been out of line with her.

She recalled: ‘This married couple came up to me and the lady said “oh my husband really likes watching you, do you mind if we just…” and he squeezed my a**e.

‘I didn’t know what to do with myself. I was a bit shocked and stood back and they didn’t get invited back to the audience.’

She added to The Sun that the couple were banned from the audience after she reported him.

Rachel replaced Carol Vorderman on the popular Channel 4 show, and is currently on maternity leave as she’s expecting her second child with Pasha Kovalev.

The star recently celebrated her final day of filming, sharing behind the scenes snaps from set. 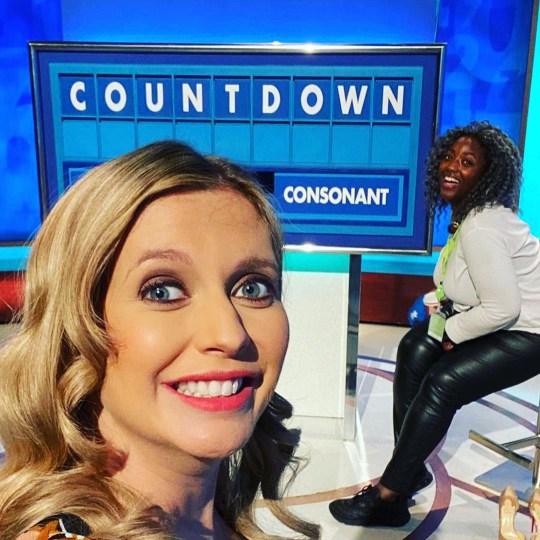 Dr Anne-Marie Imafidon will fill in for Rachel while she’s on maternity leave (Picture: Rachel Riley/Instagram)

Rachel was joined by computing and maths expert Dr Anne-Marie Imafidon in the photos, who will be taking over as presenter while she is on maternity leave.

The Countdown host captioned her post saying: ‘Well that’s it from me, I’ve officially finished filming to pop a baby out!’

‘You’re stuck with me on screen till December when the totally amazing @notyouraverageami will be keeping the numbers in line till I’m back next year!’

Rachel is already a mum to one-year-old daughter Maven, who she shares with husband Pasha.

The loved-up couple met on Strictly Come Dancing in 2013 when he was still a professional dancer on the series and Rachel was a contestant.

Rachel and Pasha – who tied the knot in Las Vegas 2019 – announced they were expecting their second child in April.

Speaking to OK! Magazine, Pasha said: ‘We’re looking forward to welcoming them into this world, sometime in October.’