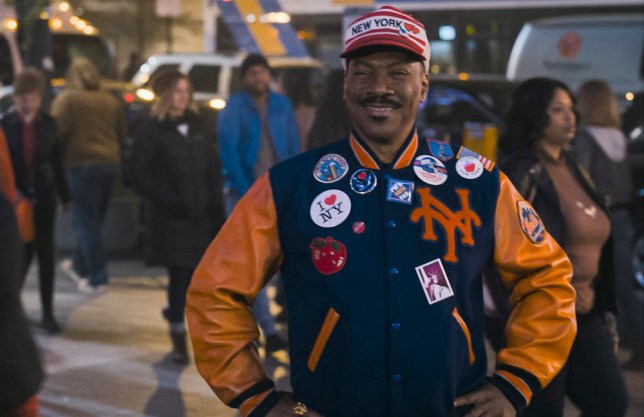 Eddie Murphy is back in Coming 2 America (Picture: SplashNews.com)

With Eddie previously saying he was pretty darn pleased with how the sequel came out, critics have shared their reviews and the first reactions from punters have swarmed in on social media as people rush to watch the film.

Following on from the original movie released in 1988, Eddie returns as the newly-crowned King Akeem Joffer who makes another dash to Queens, New York, to honour his father’s dying wish for him to find his long lost son.

Speaking about how he’s thrilled with how the sequel turned out, after being warned by fans not to ‘f**k it up’, Eddie previously told Antonio Banderas in an interview for Variety: ‘I’m just over the moon with how it’s turned out. I don’t know what it is about that movie, but that’s the one movie that I’ve done that, like, on Halloween people dress up like the characters, and people always say lines from that movie to me.’

But how has it fared in the public sphere?

Where critics are concerned, it appeared to divide some pundits, with Guardian giving it only two stars, but Evening Standard blessing it with four.

Meanwhile on social media, fans have shared their love for the revisit, with one declaring it ‘well worth the wait’, as others went wild over an appearance from singer Davido. Still, that’s not to say it didn’t win over all, with one adding the film was ‘cringe’. Standard.

What the critics have said:

The Guardian dubbed the film ‘tired and middle-aged’ in a not-too-complimentary look at the sequel’s role alongside the OG, adding: ‘Murphy is oddly waxy and stately, and has no authority figures he can really play off.’

‘The first film comically positioned Africa as “old-fashioned” and America as “modern” – so the sequel has no clear way to update matters and establish a modern perspective. There is no way to say things have changed, because it’s basically stuck with the same old-fashioned/modern template…’

It went on: ‘Coming 2 America gets a few things wrong, yet beats the odds by getting so much right.’

Faring just a little better than the Guardian review, Den Of Geek gave Coming 2 America two-and-a-half stars, insisting that while it’s clear those who made the film had a lot of fun, it’s not immune to the ‘common comedy sequel pitfalls’.

It read: ‘The whole setup can sometimes feel like an SNL sketch with high production values, but seeing Murphy and Arsenio play off each other can momentarily win over even the most indifferent pop culture aficionados. Still, those moments are fleeting…’

With three stars, Empire’s critic mused while it may miss the ‘charm’ of the original: ‘It’s a colourful, likeable re-spinning, replete with big dance sequences… a string of cameos, obvious messaging … and gentle skewering of the Black experience, from gentrification to eschewing ideas around primitivism.’

Not envying anyone who is tasked with making a sequel to such a classic, Rolling Stone gave Coming 2 America three stars.

The review suggested the film was more like an ‘update’, rather than a reboot, or sequel, reading: ‘It’s like watching a movie mold itself around the laugh track of the original. But when the original is genuinely funny…’

And the fans? Overall, they love it:

I just watched ‘Coming 2 America’. IMHO not as funny as ‘Coming to America’. Not as many cuss words in this sequel which is most likely why some may not find it as funny but I thought it was a great movie with a great message about change. #Coming2America #Zamunda pic.twitter.com/CQvkpVg7Th

It was beautiful ð funny too…
Nothing on the original, but it wasnt supposed to be better, im content. ( Wish the son would’ve been recast tho ð©)#Coming2America

2 minutes in and I’m grinning like a fool. They’re all here…30 years older….. Brilliant. #Coming2America

Itâs about presentation and representation for me. A big thank you to Eddie Murphy for portraying us awesomely once again!#Coming2America

#Coming2America is a celebration of Black talent, but I need to talk to the screenwriters about the script because the pacing and story is a little off. Leslie Jones is hilarious though

Still, you can’t please everyone: