Colin Jost and Scarlett Johansson have been married since October 2020, but Michael Che‘s wedding gift has yet to arrive — and they’re pretty nervous about it.

“The whole time I was waiting for the other shoe to drop and wondering what his long con was going to be,” Jost, 38, said on the Wednesday, February 24, episode of The Ellen DeGeneres Show. “The other day, he just kinda came up to me in the hallway and was like, ‘Hey, I got you something.’ And I was like, ‘What do you mean?’ And he’s like, ‘Wedding present. I’ll have to bring it by sometime.’ I’m like, ‘Oh God.’ So I’m waiting to find out what this thing is, but we’re both pretty concerned for our well-being.”

He noted that the gift will also be a housewarming present, so the Saturday Night Live writer knows it will “take up a lot of space” in his home. “It’s probably going to be haunting in some way,” Jost joked to Ellen DeGeneres. 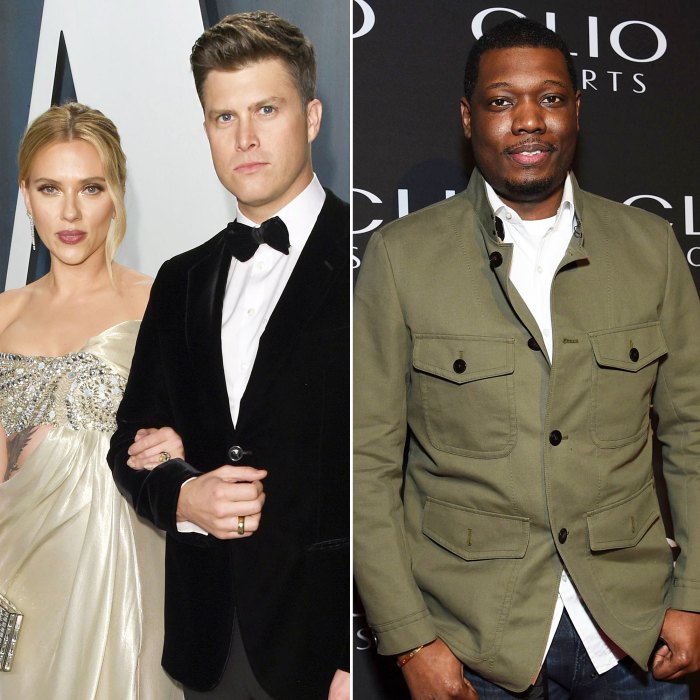 Jost and Johansson, 36, tied the knot in October 2020 surrounded by their closest friends and family, despite the coronavirus pandemic, which forced them to limit the guest list.

“[We] felt lucky that we were able to get in a wedding, have our families there and be able to do it safely,” the Tom & Jerry star said on the Tuesday, February 23, episode of Late Night With Seth Meyers. “It’s strange to get married because part of marriage is, obviously, entering society as a couple. That’s, like, the traditional idea of marriage. Instead, it’s like everything’s happening in a vacuum. Some of our closest friends we haven’t seen in a year. [They] couldn’t come to the wedding.”

He also noted that they haven’t been able to visit with many friends, not only because of the pandemic but due to their busy schedules.

“We got engaged and then immediately went to London to film Tom & Jerry and Scarlett went to film Black Widow. We’ll see which one ends up being the bigger hit. Jury’s out,” the comedian quipped. “We got engaged and we basically fled town, so we didn’t see anyone that summer.”

The Lucy star met the How to Be Single actor on the set of Saturday Night Live in May 2017. The relationship was confirmed two years later. “This place means so much to me,” she said during a December 2019 appearance on the sketch show. “I have so many friends here, and I met the love of my life here.