The drama is coming later this year (Pictures: BBC)

A heavily bearded Colin Farrell looks unrecognisable as he puffs on a pipe in new pictures from The North Water.

A new look at the drama – filmed in the Arctic and adapted by Andrew Haigh from Ian McGuire’s 2016 novel of the same name – shows a dirty faced Farrell with long dark hair and a beard as Henry Drax.

Meanwhile, Stephen Graham – who is sporting shoulder-length hair as the Volunteer’s Captain Brownlee – wears a full-length fur coat as he stands beside him on the deck of the ship.

The BBC Two programme’s crew travelled as far as 81 degrees north to film sequences in the pack ice, the furthest point north it is believed a drama series has ever filmed.

Based on McGuire’s novel, the five-part series tells the story of Sumner, a disgraced ex-army surgeon who signs up as ship’s doctor on a whaling expedition to the Arctic. 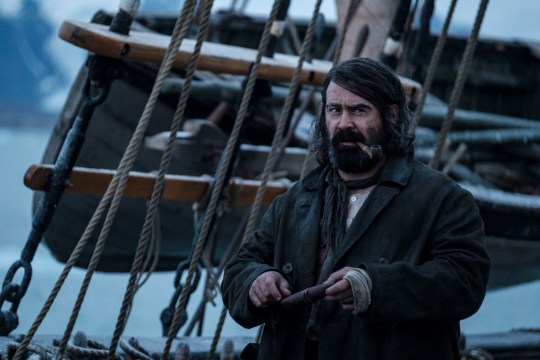 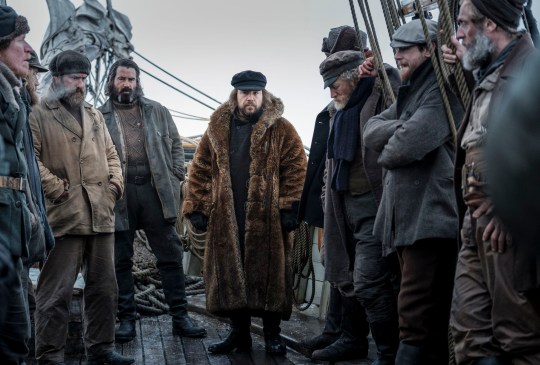 The crew stand on the deck of the Volunteer (Credits: BBC/See-Saw Films/Nick Wall)

As the true purpose of the expedition becomes clear, confrontation between the two men erupts, taking them on a journey far from solid ground and beyond the safe moorings of civilisation.

The series is set in Hull and on the ice floes of the Arctic in the late 1850s, where shooting took place on the frozen seas north of the Svalbard archipelago.

Colin is no stranger to undergoing epic transformations for a role.

Earlier this year, he was spotted out and about in Los Angeles with a newly shaved head as he got ready for filming as Oswald Cobblepot – aka The Penguin – following various production hiccups on The Batman.

Colin was seen wearing a black face mask, black vest and tiny shorts paired with walking boots as he went for a hike in the hills.

The actor removed his face mask once he was back in the safety of his car, before heading home after his workout.

The North Water will air on BBC Two and BBC iPlayer this autumn.