Rest assured Bachelor Nation: all is good between Clare Crawley and Dale Moss. The OG season 16 Bachelorette took to Instagram to thank fans for their support — and clarify her emotional message.

“I just wanted to get on real quick and tell you guys thank you for the response you guys gave yesterday on the post that I posted. I meant everything to me,” the 39-year-old hairstylist began via Instagram Stories on Sunday, November 30. “I wasn’t trying to state the obvious, but I just felt like we could all use a little reminder to have some compassion to everybody. Not just to me, but to everybody. We all don’t talk about everything that’s going on, but we’re all going through things at different magnitudes.”

She continued: “Regardless of what it is, even if it’s something big or small. Essentially everybody just has their stuff that they’re going through, and we don’t know from the outside looking in.”

Crawley then panned to Moss, 32, who was sitting next to her on the couch in her Sacramento home. 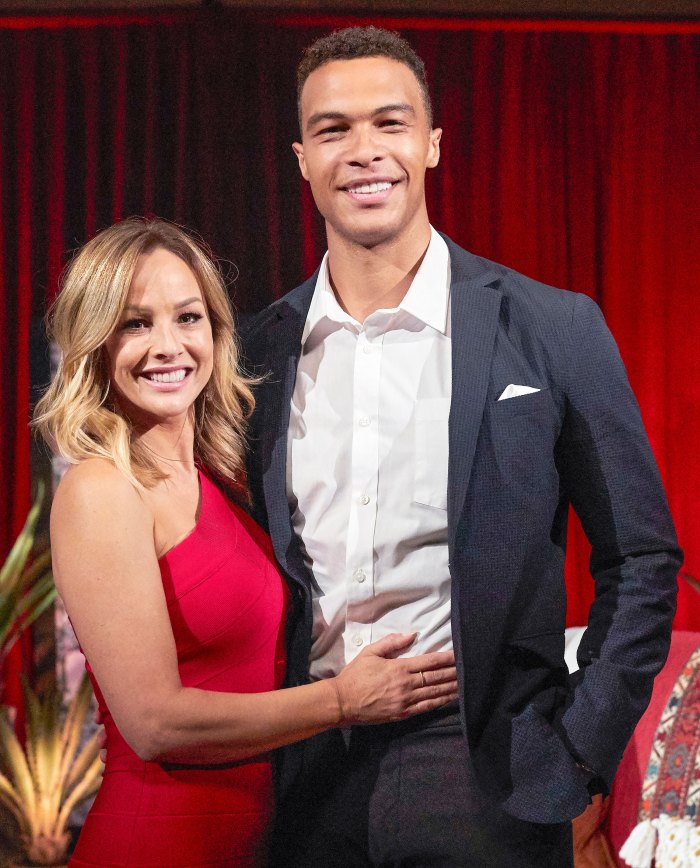 “I also almost lost my finger this morning,” she told her followers, holding up her bandaged finger. “Dr. Dale saved the day though.”

Crawley got engaged to Moss within the first two weeks of filming season 16 of The Bachelorette over the summer. After their proposal aired on the November 5 episode, Tayshia Adams arrived in Palm Springs and resumed filming with Crawley’s remaining contestants (and four new suitors).

The Bachelor Winter Games alum made headlines on Saturday, November 28, after opening up about her struggles post-filming.

“Hi. It’s me, Clare,” she wrote. “Not Clare that you have seen edited on your television or social media squares. But the human one with feelings, insecurities, emotions, and a normal life just like you. And just like you, I’m going through things, big and small, that all of us experience at some point or another. Just like some of you I can be shy and awkward or even fighting off my anxiety the best I can that day. There are good days and bad days.”

Moss, meanwhile, shared videos of the couple’s weekend together, which included making Christmas cookies and going out for wings. In the comments section of his most recent Instagram post, he told one of his followers that “the best is yet to come” for him and Crawley.

The duo previously got candid about dealing with the backlash of their whirlwind romance during a joint interview on the November 10 episode of the ABC show.

“I think I’d be lying if I said it didn’t hurt me because here is something that I finally found that makes me so incredibly happy, like, to my core,” she told Chris Harrison. “To finally feel this type of love that I have been craving and wanting, I just wish people could be happy for us.”

The host also urged fans to be happy for the pair during an exclusive interview with Us Weekly earlier this month.

“People should remember it is also someone’s life. This is Clare, this is Dale, these are human beings. So maybe think twice before you hit the send button. … I always try to give that PSA of maybe people will be decent human beings. I always wish the best and think the best of people,” he told Us. “Look, they’re in love. They’re happy. Why not just do something crazy and support them?”