IT was all change in the Love Island villa tonight, with bombshells arriving, couples mixing and matching, and news of the first recoupling of the series.

Tonight’s episode picked up right where we left off with the fall-out after naughty Brad McClelland savagely snubbed partner Faye Winter.

While Sharon Gaffka leapt to her fellow girls’ defence and said he should have kissed “anyone but the girl he’s coupled up with” as the one he fancied least, Aaron Francis and Jake Cornish appeared to be on Brad’s side.

Faye later pulled Chloe Burrows – who Brad had snubbed her for – for a chat, and the pair cleared the air following the awkward encounter.

This is when the hunk began to put in the legwork to make amends, giving Faye his only glass of wine as an apology, and even promising to make her granola for breakfast in the morning.

Who says that romance is dead? 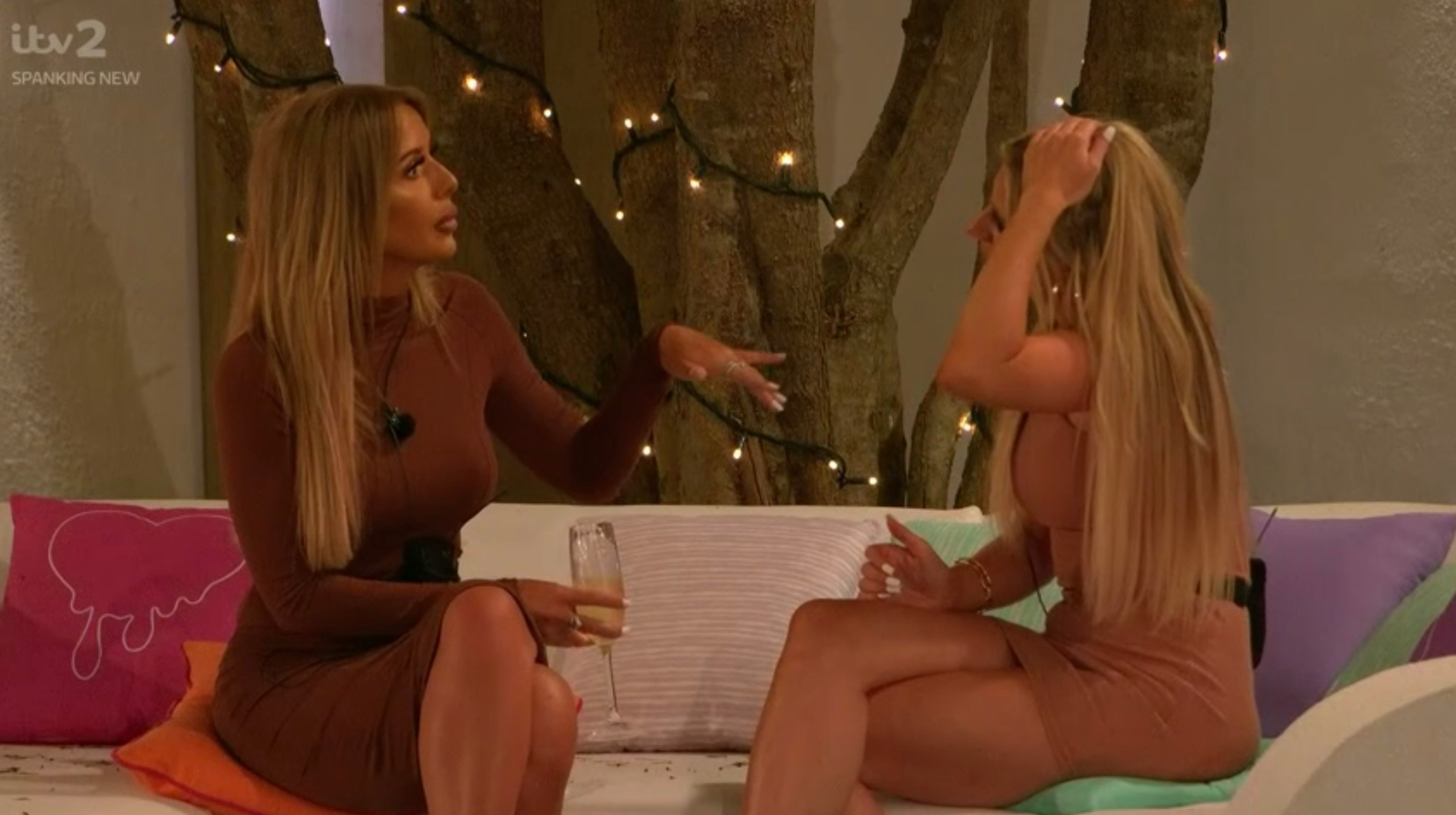 Faye and Chloe cleared the air after yesterdayCredit: Eroteme 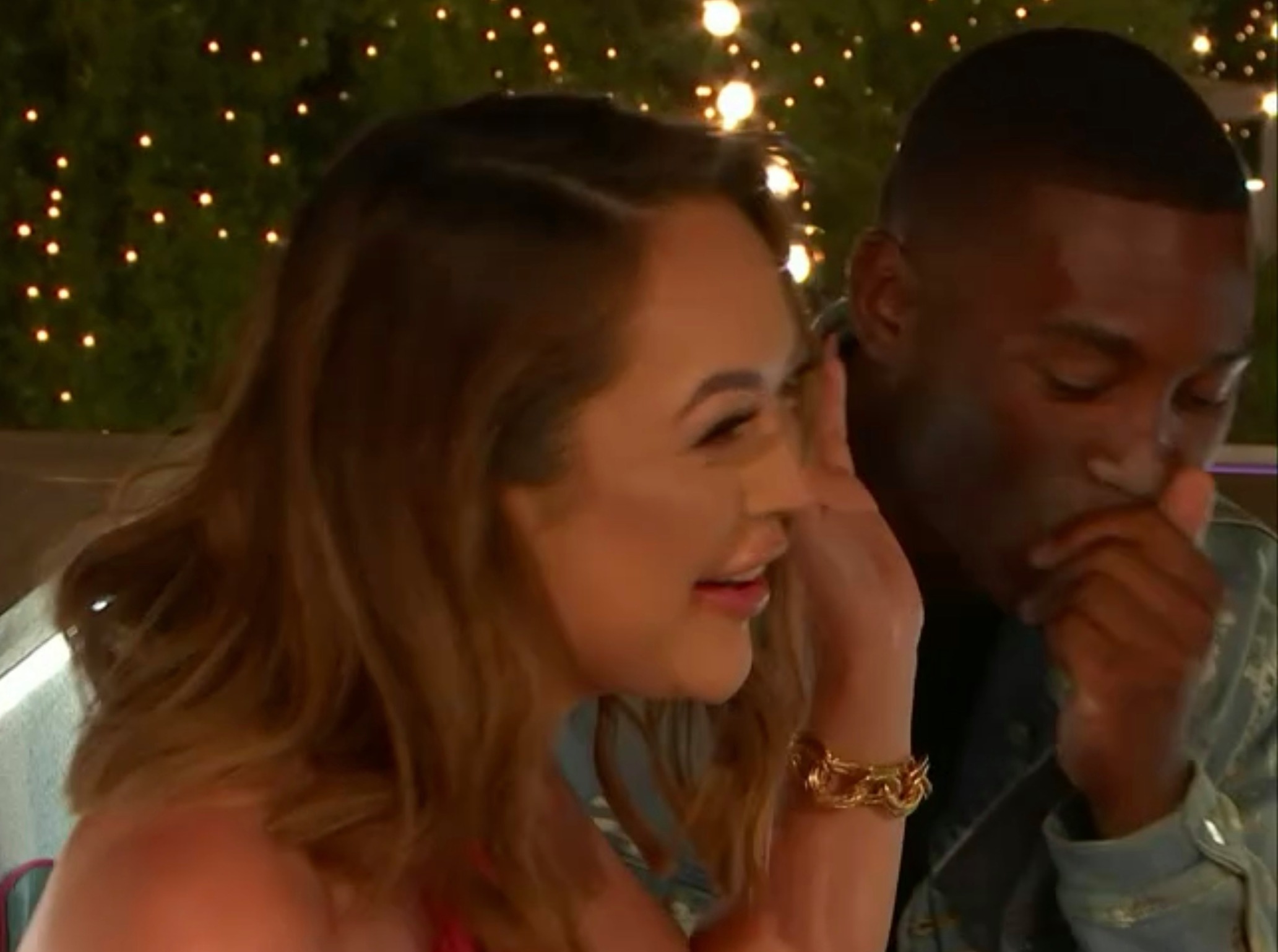 Sharon was mortified to cover Aaron in make-upCredit: Eroteme

Certainly not Aaron and Sharon, who look set to create the trickiest couple name in Love Island history (Shaaron?) after bonding on the rooftop terrace.

The pair even shared a cheeky snog after getting along like a house on fire, with Aaron confessing that current partner Chloe isn’t his type – while Sharon very much is.

However, she was left tickled when she realised their smooch had covered his face in make-up – brushing lipstick and foundation from his skin as they returned to the rest of the excited Islanders.

Elsewhere, Jake left partner Liberty Poole, as well as the whole of Twitter, baffled when he revealed that his favourite sex position is “scissoring”. 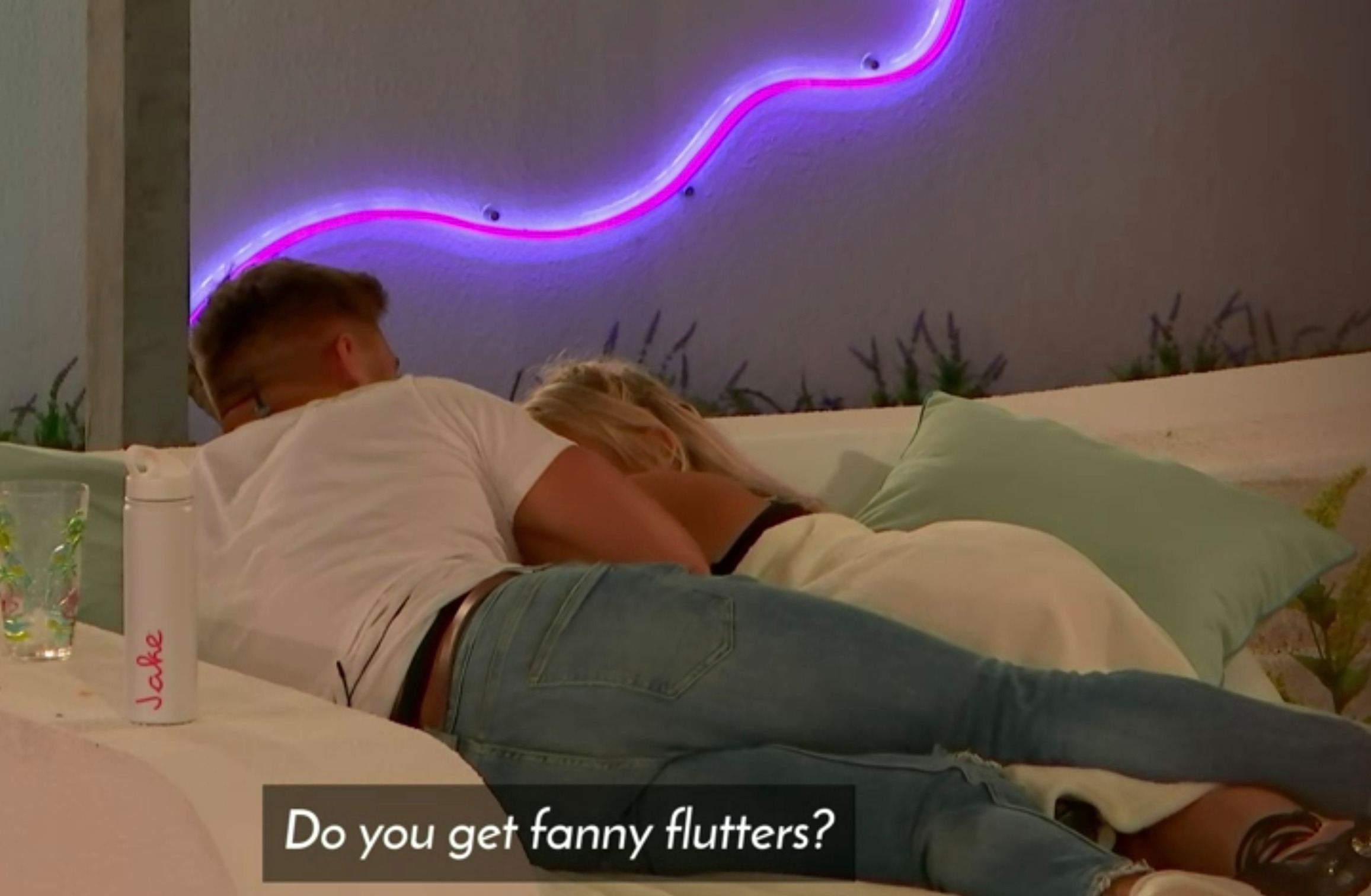 Who says that romance is dead?Credit: Eroteme 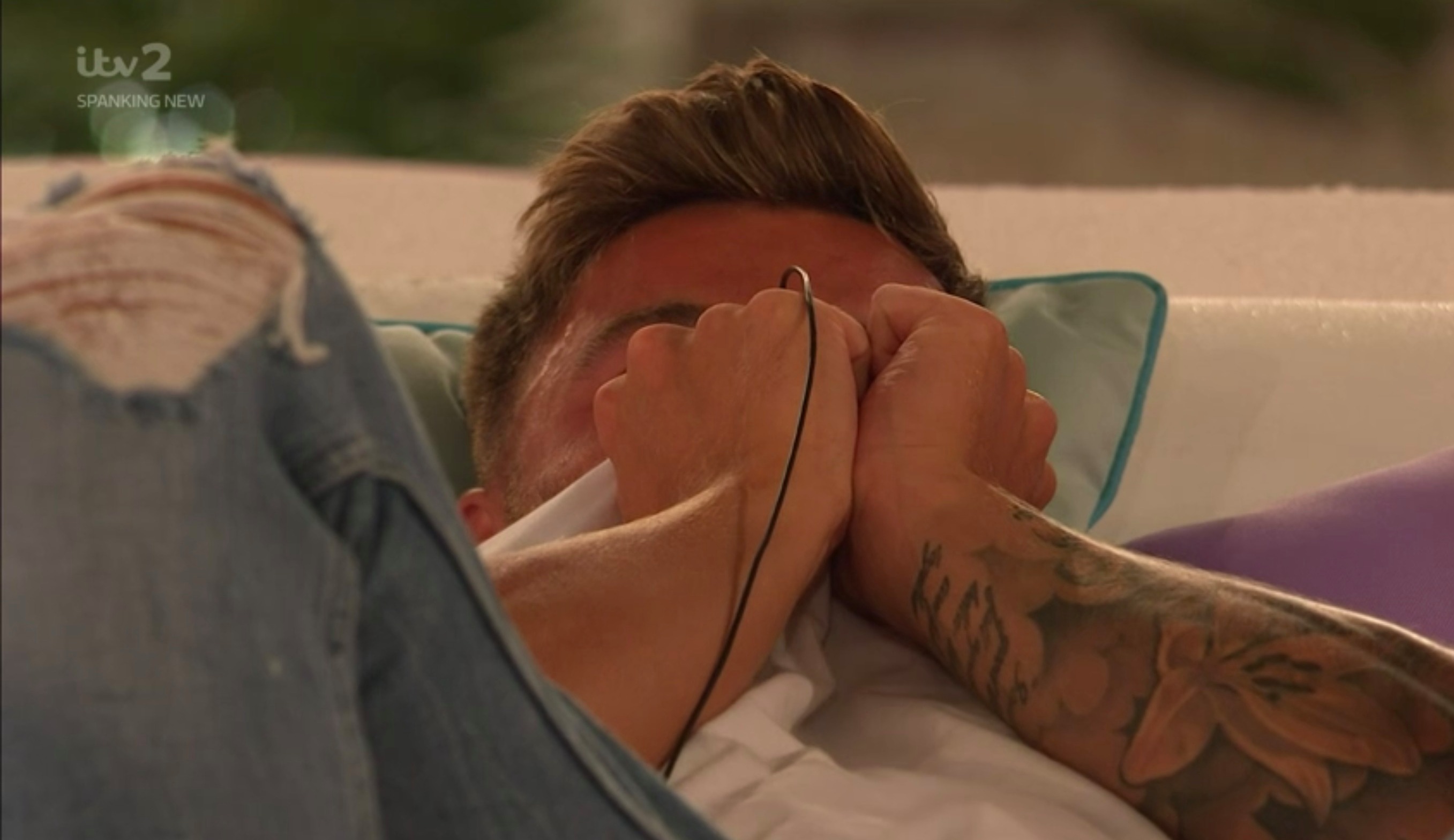 Jake and Liberty’s kiss was rudely interrupted by his ill-timed fartCredit: Eroteme

He then awkwardly asked if she had “fanny flutters” before they shared a romantic kiss – which was rudely interrupted by Jake’s massive fart.

Smitten Liberty thought nothing of the guff gaffe, laughing at the incident between chokes about how bad it smelt.

This appeared to be a good sign that their relationship is going strong, however, Jake left Hugo Hammond stunned when he privately admitted that he isn’t happy with the Nando’s waitress.

Furious fans panicked about him leading the beauty on – with Liberty previously revealing that Jake gives her “butterflies” and that she “really fancies” him. 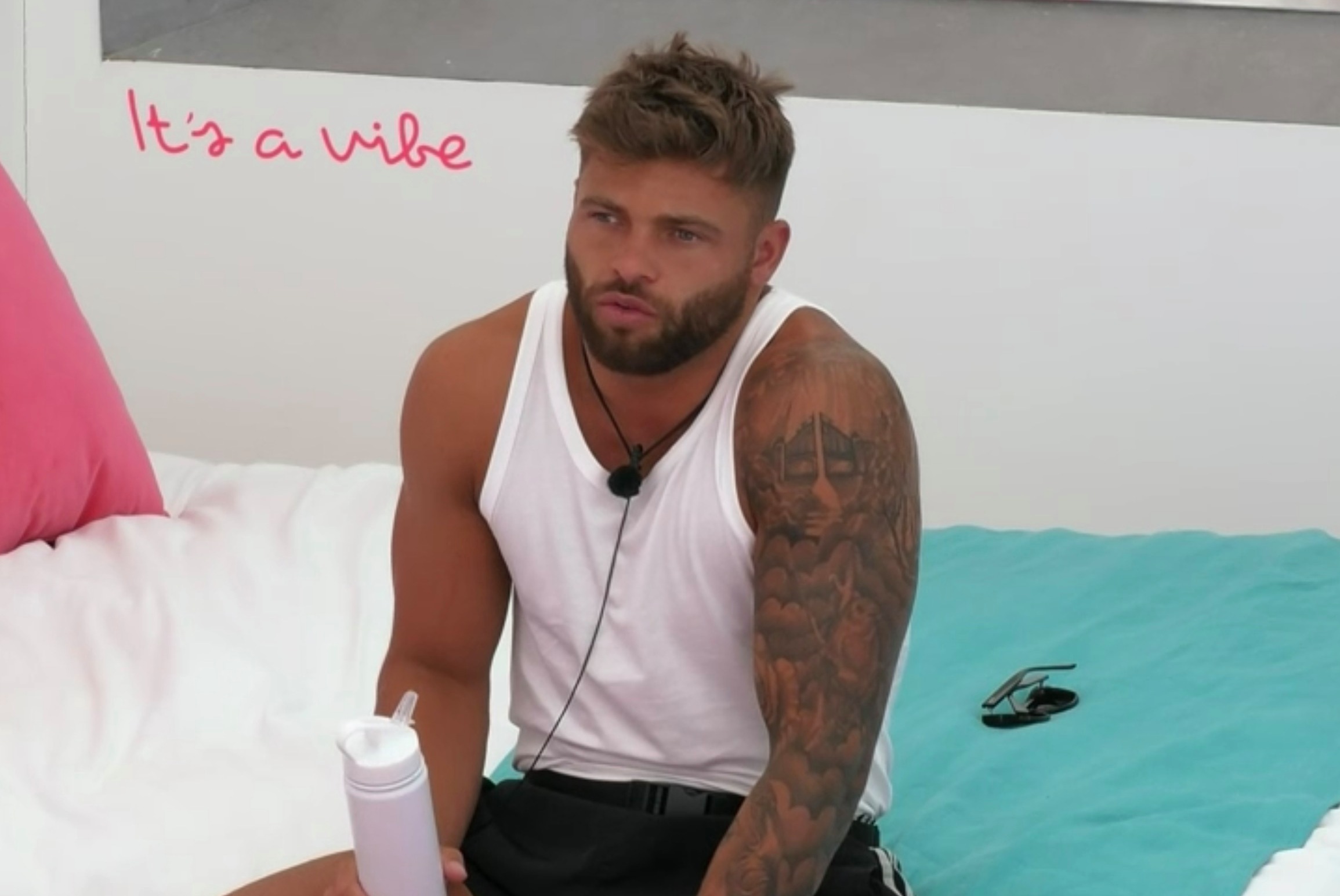 But Jake told Hugo that Liberty might not be the girl for him after allCredit: Eroteme 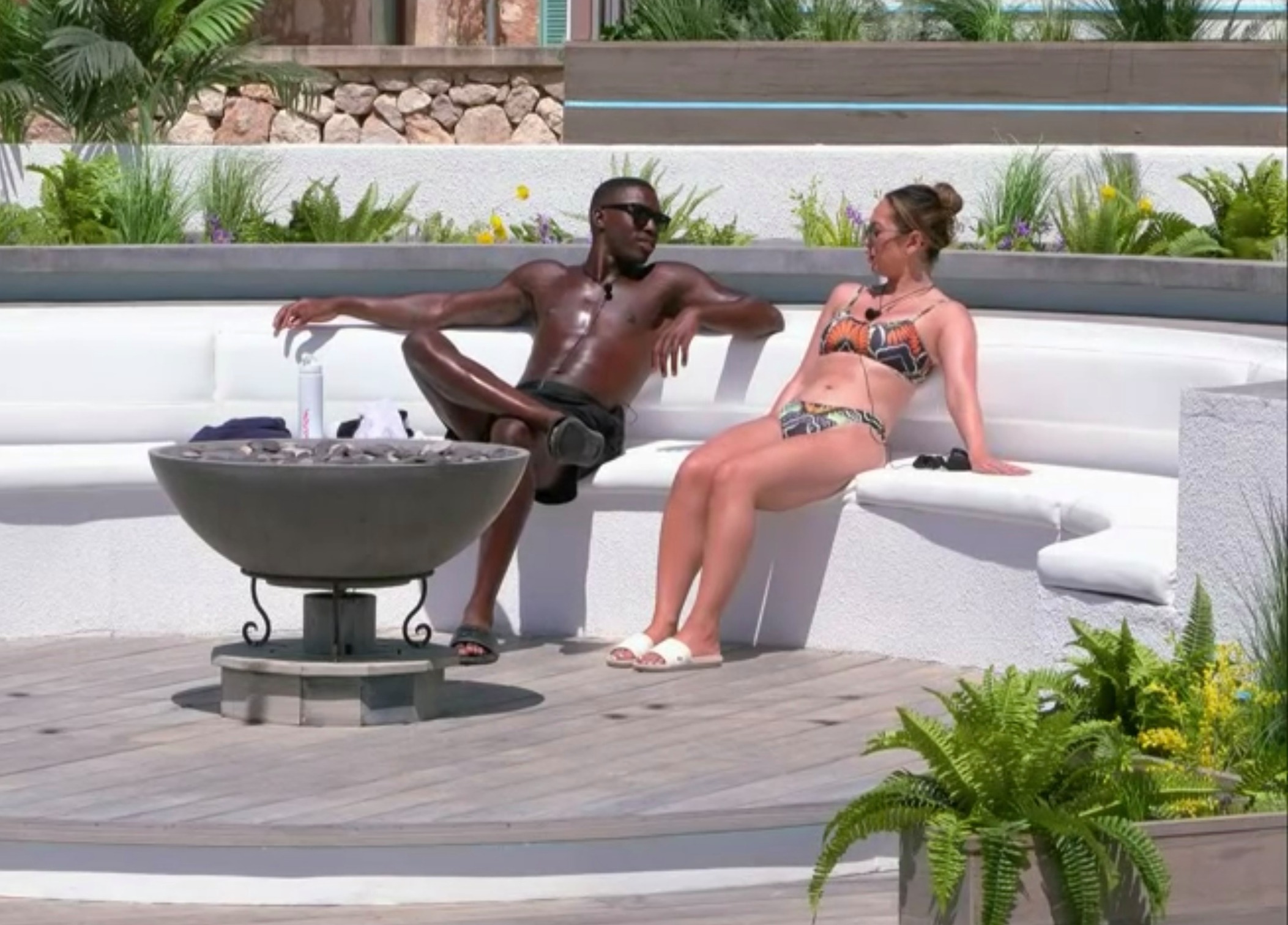 It wasn’t just Jake causing shockwaves this evening, with Aaron also left confused when Sharon told him that she’s “ginger”.

In a further surprise moment, she added: “I’m as sexy as a potato waffle” – but the hunk doesn’t appear to agree, or he’s a really big fan of potato waffles.

Other couples getting to know eachother include Kaz Kamwi and Toby Aromolaran, who enjoyed a late-night spoon, and Hugo and Faye. 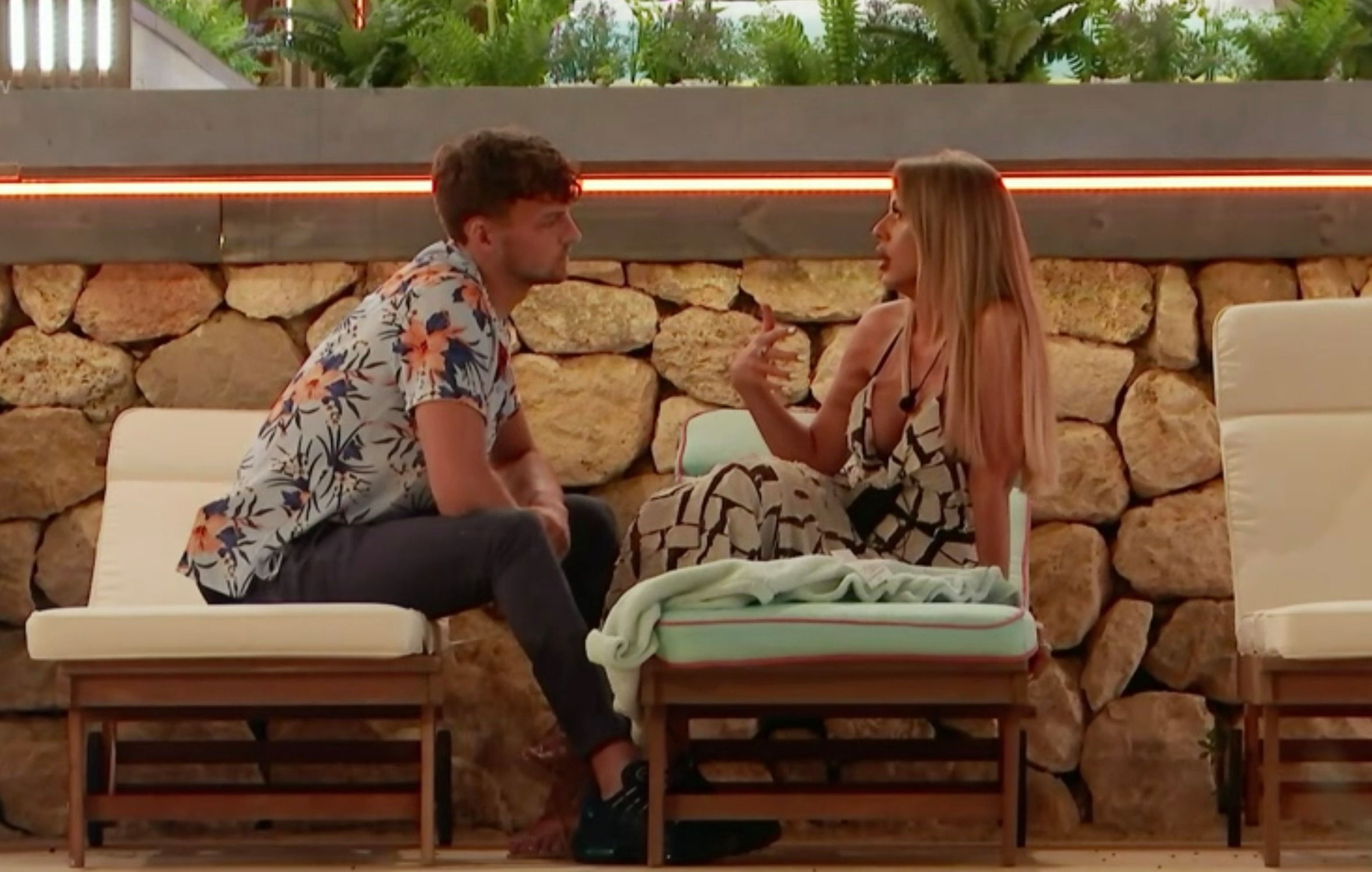 Faye got to know HugoCredit: Eroteme 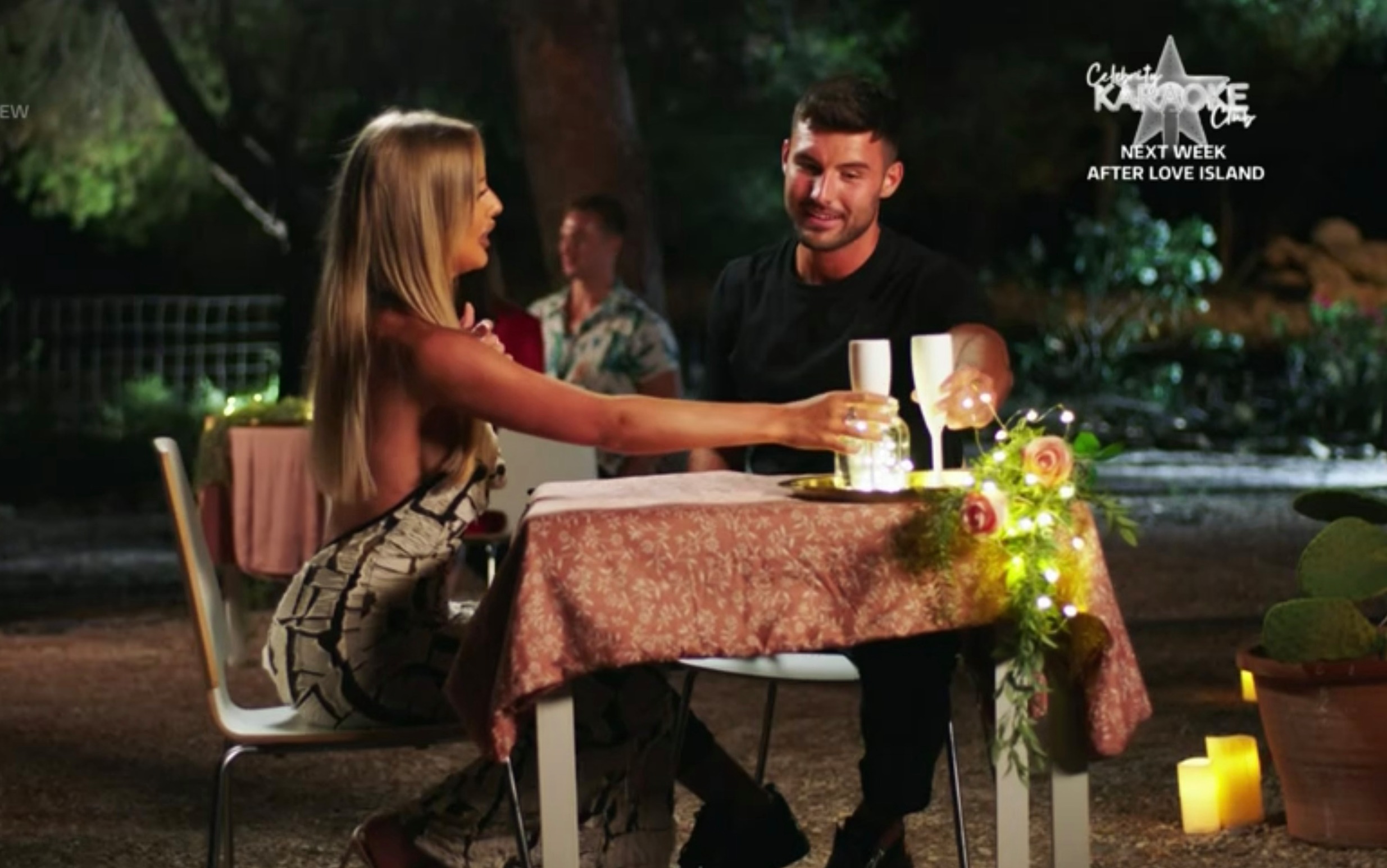 But was then whisked away on a date with new boy LiamCredit: Eroteme

Conversely, Chloe reluctantly “got to know” Brad a little too well for her liking – later calling him out for not asking her any questions about herself.

When he rectified this, Twitter went into meltdown as they claimed she’d discreetly opened up about her affair with a married man, which she revealed before going onto the show.

Just as things looked like they were going well between Aaron and Sharon, and Hugo and Faye, Love Island bosses threw two cats among the pigeons with bombshells Chuggs Wallis and Liam Reardon. 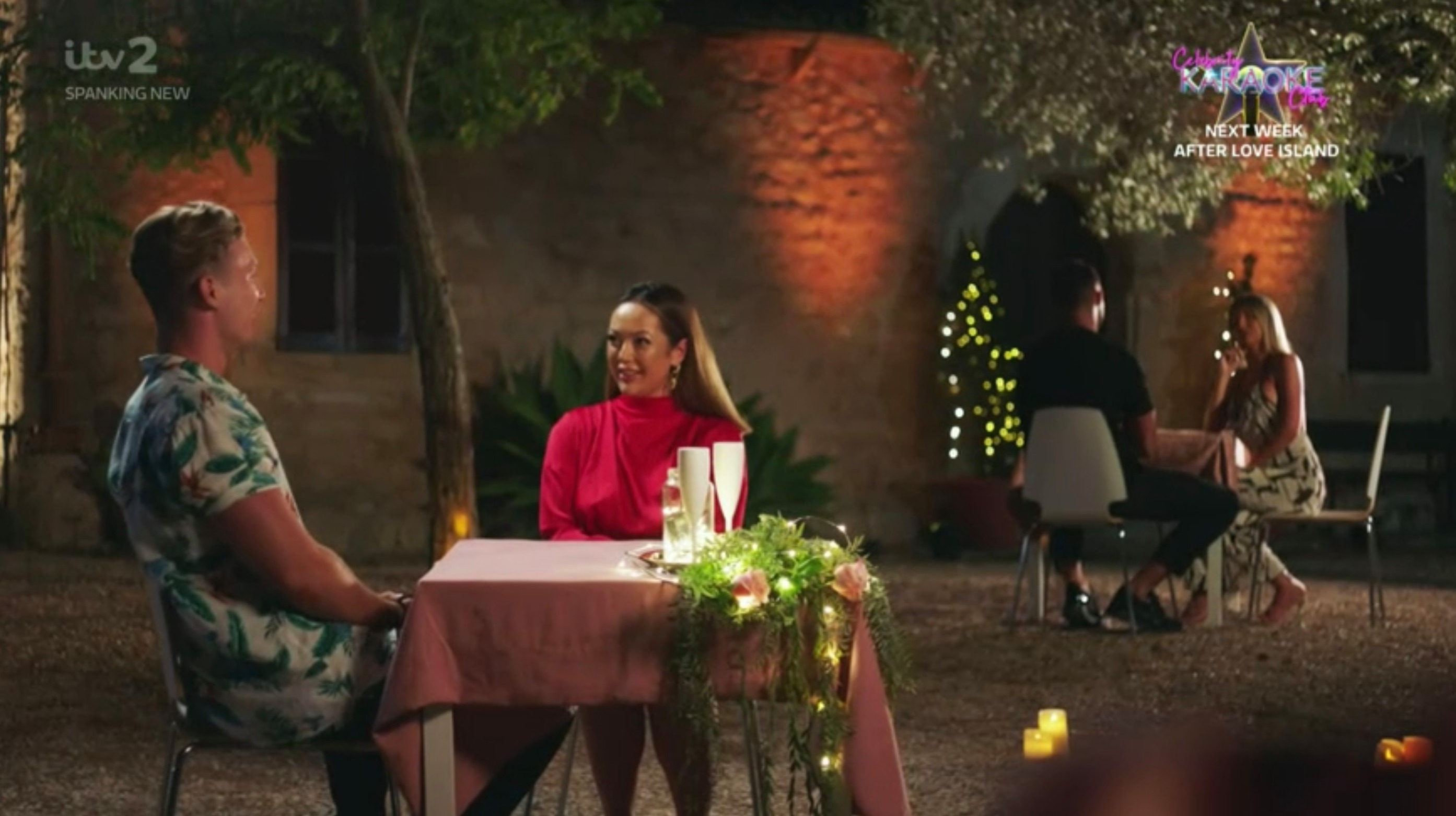 Sharon was chosen for the date with ChuggsCredit: Eroteme 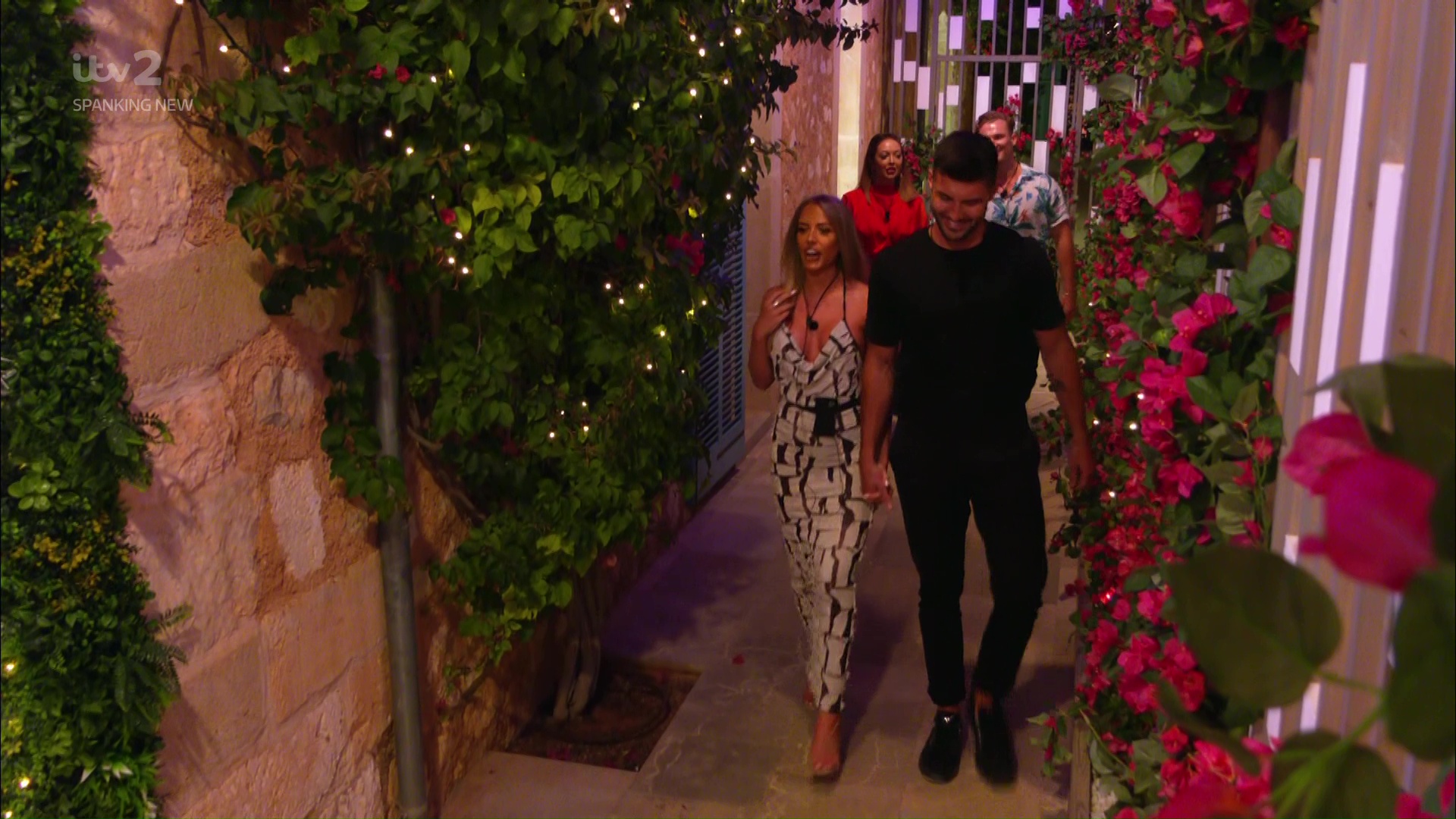 Viewers voted for the two beauties to go on dates with the new hunks – with Faye immediately smitten with Liam, and Sharon leading the shock for the reason behind Chuggs’ unusual nickname.

Real moniker Oliver, the bucket hat entrepreneur horrified fans when he admitted the “baby” explanation behind “Chuggs” – saying that it stood for “cuddles and hugs”.

The juicy episode ended with a tease for the first re-coupling of the series, with the girls holding the power in tomorrow night’s show as they choose which boy they want to couple up with.

Two will be left single, which means they could be at risk of a dumping – or be prime target for future female bombshells.