Reese will help send kids to sleep on the programme (Picture: BBC/PA)

Reese Witherspoon has become the latest A-list star to read to children for CBeebies Bedtime Stories, emphasising the importance of recognising ‘extraordinary’ moments in everyday life.

Over the years, several Hollywood icons have appeared on the channel to offer soothing words as kids (and adults) across the nation drift off to sleep, from Bridgerton actor Regé-Jean Page to singing sensation Dolly Parton.

Reese, 45, has set a new record with her upcoming appearance, becoming the first Best Actress Oscar winner to appear, which she won for Walk The Line in 2006.

On the programme, the Big Little Lies and Legally Blonde star will read Extraordinary!, a book by Penny Harrison that celebrates the special moments that we share with friends and family in life.

As she begins the tale, she says: ‘Sometimes, when we’re busy, it can be hard to find time to notice the world around us. The things we see every day can seem a bit… ordinary.

‘But if you stop, and look closer, you’ll see that our world is extraordinary!’ 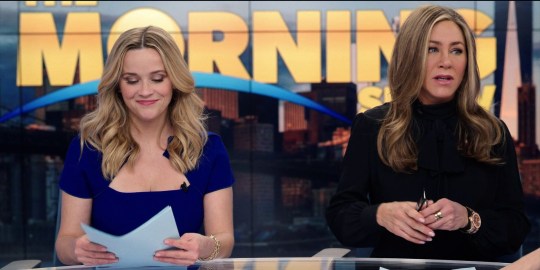 One of her most recent roles has been on The Morning Show with Jennifer Aniston (Picture: Apple TV+)

As the children watching will be encouraged to go to sleep, Reese will ask them to look closely at something the next day that may seem ordinary to them at first.

However, upon closer inspection, they may realise there is something special about the subject they’ve chosen.

Reese had plenty to celebrate earlier this month when it was announced that The Morning – on which she stars with Jennifer Aniston – had been renewed for season three.

Sharing the news on her Instagram Story, she wrote: ‘So excited to bring ya’ll a third season of The Morning Show.’

In October last year, Ed Sheeran used his appearance on CBeebies Bedtime Stories to open up about the stutter he had as a child, expressing his hope to ‘inspire and support’ kids who can relate to his experience.

‘Hello, my name is Ed. When I was little, I had a stutter. And that means when I spoke, sometimes the words got a bit stuck on the way out. And it made me feel different,’ he said.

Ed read a book called I Talk Like A River by Jordan Scott and Sydney Smith, which tells the tale of a boy with a stutter ‘whose father helps him by explaining that the flow of his words is like a river’.

The singer explained the significance of reading the book for him personally, highlighting how much it also means to him as a father.

CBeebies Bedtime Stories airs each weekday at 6.50pm on the CBeebies channel and is also available on BBC iPlayer. Witherspoon’s story will air on Friday January 28.