‘Come on, Harry, we want to say goodnight to you!’ (Picture: PA)

Harry Styles’ fans are calling for the global superstar to become a CBeebies regular after tuning in to watch his Bedtime Stories debut.

The As It Was hitmaker, 28, read Jess Hitchman’s In Every House, On Every Street, which is illustrated by Lili la Baleine, on Monday evening.

Of course, Harry didn’t disappoint in the fashion department as he rocked blue and brown spotted pyjamas with yellow painted fingernails matching the sofa and the CBeebies logo.

Before he kicked off tonight’s reading, he introduced himself (as if he needed an intro) and said: ‘Hello I’m Harry, welcome to my house. I love it here, I like to listen to music and read and hang out with my friends.’

As we predicted, fans of all ages tuned in to see the Adore You singer on the popular children’s channel and quickly flooded Twitter to share their thoughts.

‘I cannot believe that at the big, big age of 19, I just watched Harry Styles read a bedtime story on CBeebies,’ one person tweeted.

I cannot believe that at the big, big age of 19, I just watched Harry Styles read a bedtime story on CBeebies.

My 3 year old son Litually said to me when I realised I had missed Harry on CBeebies bedtime storyâs:

My 3 and half year old; Did you miss Harry mummy?

Hahaha my son is so cute sometimes ð¥°

Did I just watch the CBeebies Harry Styles bed time stories the evening before my psychology a level exam? Yes. No regrets best 3 mins of my week #alevels2022

Am I 16 years old? Maybe. Did I just force my family to watch cbeebies just so @Harry_Styles could read me a bedtime story? Hell yes! ð

tell me WHY im tearing up at Harry Styles on CBeebies,,,, it is peak mental breakdown hours

Did I Watch CBeebies at the big age of 18 just because Harry was reading ?! Yep and what ð

‘Can Harry reading bedtime stories on CBeebies become a weekly thing please I’ve never been so relaxed,’ added another.

‘Did I Watch CBeebies at the big age of 18 just because Harry was reading ?! Yep and what,’ a third added.

The Dunkirk star joins quite a list of musicians and other stars who have previously read CBeebies Bedtime Stories, including Kate Middleton, Dolly Parton, Tom Hardy, Rege-Jean Page, Rose Ayling-Ellis and Dave Grohl. 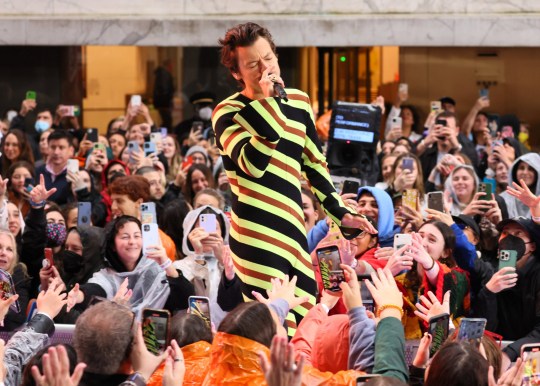 The 13-track album features the chart-topping lead single As It Was, with John Mayer on lead guitar on the songs Cinema and Daydreaming.

Speaking about the record, he said: ‘I think everyone went through a big moment of self-reflection, a lot of navel-gazing, and I don’t know if there’s anything more navel-gazing than making an album. It’s so self-absorbed.’

He added to Better Homes & Gardens: ‘It sounds like the biggest, and the most fun, but it’s by far the most intimate.’