Two sides to every story! Carrie Ann Inaba spoke out after some fans claimed she is too tough on Artem Chigvinstev and his Dancing With the Stars partners after their romantic past. This season, he is teamed with Bachelorette alum Kaitlyn Bristowe.

The Hawaii native, who dated the Russian dancer for nearly three years before splitting in 2009, faced backlash earlier this month after her rough criticism of Chigvinstev and Bristowe’s November 2 jive number.

“I think it’s hysterical. You know what I love though? This is what I love about the Bachelor fans and Bachelorette fans. They can create a story around it!” Inaba, 52, told Us Weekly and other reporters following the Monday, November 9, episode. “And it’s weird because I totally understood what they were doing. They’re like, there’s jealousy there and there’s this and that because that’s what the Bachelor and Bachelorette is all about, right? It’s about creating stories about everybody. Look, I love Artem, I respect him, I love him and Nikki [Bella] together. I love that they just had their little baby Matteo. We’ve had Nikki on The Talk, I’m a huge fan. There’s nothing but love and I thought it was hysterical. So none of it bothers me. I know that people are passionate about Dancing With the Stars. They’re passionate about who they’re voting for. I love that. I will not stand for bullying of me or anyone. I will not. We’ve had enough of it in our country. I’m sick of it. I’m never gonna stand for that, I’m never gonna support it. But I am OK with passion and I am OK with discussion.”

Inaba even has been responding to some critics over the past few days. “I got a lot of private messages about Artem and Kaitlyn and people that wanted to open up a dialogue. They weren’t calling names or bullying. I spent a lot of time writing to them. ‘Hey this is why, these are lifts, these are not allowed in this dance. I took off one point because they had a lift that first week then they also made a mistake and that’s usually a solid one point that comes off …’” she explained to Us. “And then Artem was passionate about what he wants, which I can appreciate. So you know, it’s OK. It’s passion. How you direct your passion though, not only here on Dancing With the Stars but in the world in general, we all need to be careful with and we need to check ourselves. Dialogue and trying to understand the other person’s point of view is very important to me. So I don’t appreciate people calling names and things like that. It’s not helpful. But am I interested in your perspective? Yes. Always. … But I gotta do my job! I’m a judge!”

After weeks of harsh criticism about the couple’s routines, Inaba gushed over Bristowe and Chigvintsev’s Monday performance — and gave them a perfect 10.

“I know it’s been a rough couple of weeks, but I have to say, I have to give you a standing ovation,” she said after the pair’s Argentine tango. “That was incredible. We push you because we want you to reach your ultimate. Every line was amazing. Every lift. … Everything about it was amazing. Everything that we’ve been wanting from you was in this routine.” 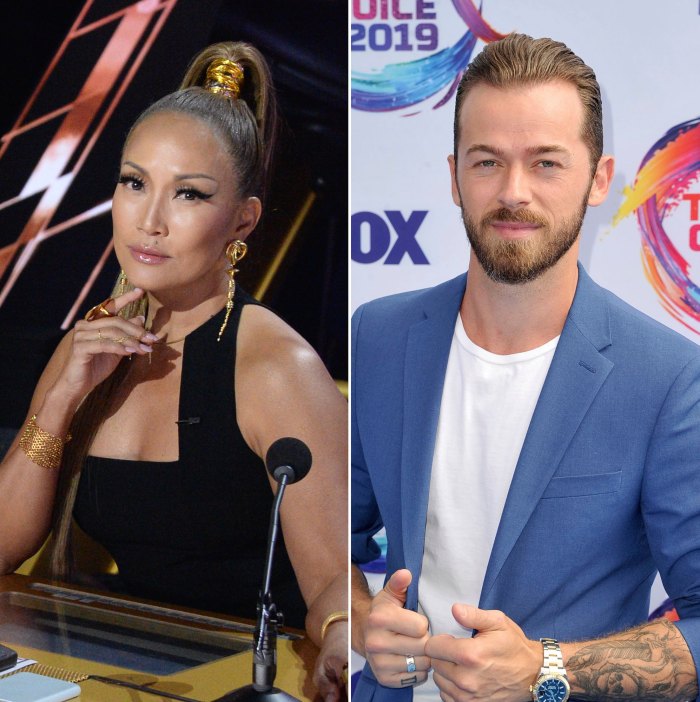 Following the positive feedback, the former Bachelorette star, 35, and the DWTS pro, 38, ran over to the judge and gave her a hug. “She was fantastic! Choreography was incredible, she performed it with passion and heart,” Inaba told Us after the show. “Kaitlyn’s been a great dancer from day one. Great dancer. I’ve said it every week despite what some of the clips show. I actually have said it every week how good she is, but I’m always gonna push people on our show to be better. Dancing With the Stars is not about showing up great and staying at the same level. Dancing With the Stars is about growth and transformation and I don’t care how great you start, you still need to show us some sort of growth and evolution. And tonight, I mean, she was amazing. I’m so proud of her. And people that I think have great potential, I have a tendency to push a little harder because I know they can.”

She continued: “As a female dancer, I tend to push women a little harder because I understand it from their perspective, so I know exactly what I’m pushing for because I can feel it from them that they’re so close to it. And I know it was hard and I know that they were frustrated but it happens all the time. I don’t take it personally. If I took things personally I couldn’t be a good judge! I have to not listen to what everybody’s saying about me because it’s not about me. I’m a judge. I’m there to help them.”

Inaba, who dated Chigvintsev until 2009 after meeting on the set of So You Think You Can Dance, previously opened up about the bullying she’s received.

“I still get bullied. Right about this time is when people start to bully me because of the way I judge people,” she said on The Talk. “I can’t believe it still happens to adults.” The Strictly Come Dancing alum added: “I want to tell people who bully: It doesn’t make me change the way I judge. I’m not about to change because you try to bully me. It only makes me stand stronger in my convictions and what I believe in.”

The Canada native, meanwhile, addressed Inaba’s tough judging on a recent episode of her “Off the Vine” podcast, noting that she wants fans to stop being so rough on Inaba for being hard on her.

“Carrie Ann is totally allowed her opinions. I’m allowed to not agree with them or feel hurt by them, but it doesn’t mean people need to go and bully on her,” Bristowe said this month. “I heard that she feels bullied and that makes me feel so terrible because I’ve been bullied so hard online … Don’t go bullying her because she’s being hard on me. That’s her decision and she’s a judge. That’s why she’s paid the big bucks to be a judge on that show, right?”

Dancing With the Stars airs on ABC Mondays at 8 p.m. ET.