She don’t cook, she don’t clean, but she does clap back! Cardi B slammed Wiz Khalifa after he suggested that she is not self-made like Nicki Minaj.

The drama began after Minaj, 37, reflected on losing the 2012 Grammy Award for Best New Artist following the Recording Academy’s announcement of the 2021 nominations on Tuesday, November 24.

“Never forget the Grammys didn’t give me my best new artist award when I had 7 songs simultaneously charting on billboard & bigger first week than any female rapper in the last decade- went on to inspire a generation,” the “Super Bass” rapper tweeted. “They gave it to the white man Bon Iver. #PinkFriday.” 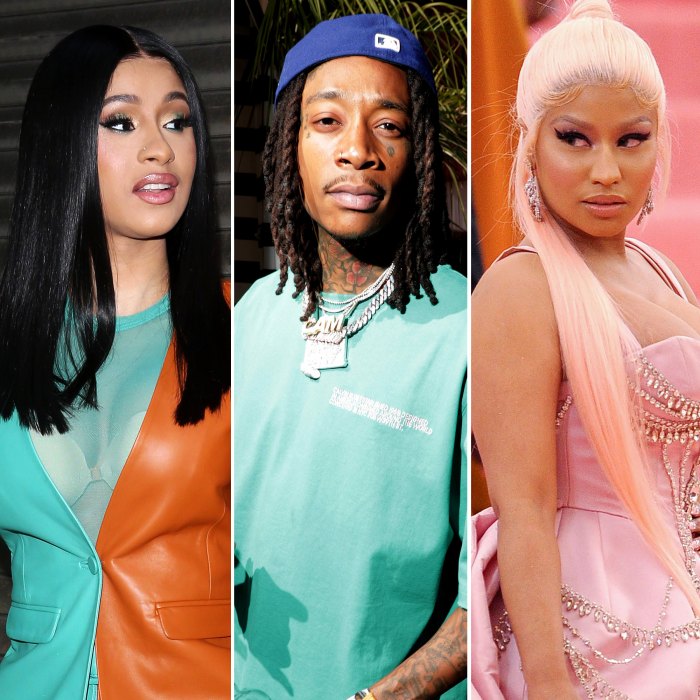 Khalifa, 33, later aired his own grievances, tweeting that he knows “how it feels” to be up for a Grammy but not win. (He was most recently nominated at the 2016 ceremony for his megahit “See You Again” featuring Charlie Puth.)

A fan replied to the “Young, Wild & Free” rapper’s tweet, “Cardi winning a Grammy when nicki minaj didn’t is the biggest proof that they don’t know a s–t bout music,” referencing the Love & Hip Hop: New York alum’s 2019 Best Rap Album win. In response, Khalifa wrote, “Most self made artists have this problem,” which several Twitter users — including Cardi, 28, herself — took as a dig toward the “WAP” rapper.

Cardi responded by tweeting a screenshot of an Instagram DM that Khalifa sent her in September 2016, which read in part, “Your [sic] doing a great job and the way you address things is admirable. Keep your light shining and don’t let others take it.” She captioned the screenshot, “They really support you when you grinding at the bottom then it’s a different story when you make it !”

The “Bodak Yellow” MC went on to call out the North Dakota native for acknowledging a tweet that compared her to Minaj, whom she infamously tried to fight at a Harper’s Bazaar party in September 2018.

“I don’t understand why n–gas entertain tweets that pit successful women against each other?” she wrote. “Ya not tired of that? Specially when ya was rooting hard when a bitch was at the bottom.”

Khalifa quickly backed off, replying, “I still support u. Nothings changed. Your [sic] self made in my book as well.” He also told his Twitter followers that he “don’t want a Cardi/ Wiz war goin on for no reason.”

Minaj was not the only artist who expressed frustration over the 2021 Grammy nominations. The Weeknd, who was completely shut out, and Justin Bieber were among the others who took to social media.