BTS is taking a break — but it’s not a breakup. The K-Pop boy band announced that they are taking an “extended period of rest” after a busy year.

Big Hit Music, the pop group’s managing group, shared the news via Twitter on Sunday, December 5, letting fans know that the group taking a much-deserved vacation after they “complete their official scheduled events,” including their upcoming 2021 Jingle Ball tour dates.

“We would like to inform you that BTS is planning to take a second official extended period of rest since their first in 2019,” the statement explained. “BTS stayed active in order to engage with fans in 2020 and 2021 amidst the Covid-19 situation, and achieved dazzling results to cement themselves as top global artists.”

At the American Music Awards in November, BTS won all three awards they were nominated for: Artist of the Year, Favorite Pop Duo or Group and Favorite Pop Song. They’re also nominated for Best Pop/Duo Group Performance at the 2022 Grammys, which airs in January.

While the BTS Army might be sad to hear that the band is going away, their management group promises that this brief period of rest is meant to give members RM, Jin, Jimin, J-Hope, Jungkook, Suga and V a “chance to get re-inspired and recharge with creative energy.”

The statement noted, “It will also be the first time for them since their debut to spend the holiday season with their families,” which is why they hope fans will understand their decision for the hiatus. 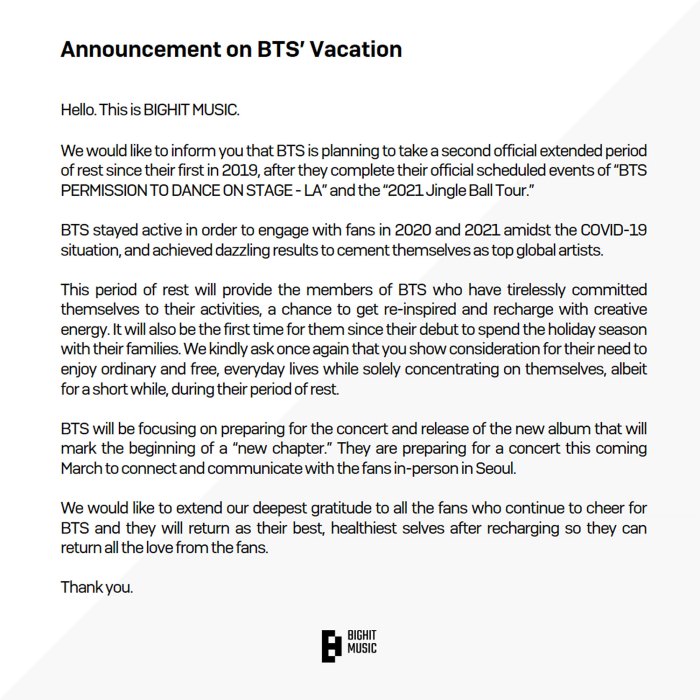 “We kindly ask once again that you show consideration for their need to enjoy ordinary and free, everyday lives while solely concentrating on themselves,” the message continued. “Albeit for a short while, during their period of rest.”

BTS played their first run of in-person show in two years, and is slated to return in March for an in-person show in Seoul. They plan to spend the next few months “focusing on preparing for the concert and release of the new album that will mark the beginning of a ‘new chapter.’”

The statement concluded with a thank you to supporters who have shown them so much love since they formed in 2013 — and promised that the boy band “will return as their best, healthiest selves after recharging so they can return all the love from the fans.”

In August 2019, BTS announced that they were taking an “official and extended period of rest and relaxation” — their first since their debut six years earlier. They returned one year later with the release of their single “Dynamite,” which set the record for the most weeks at No. 1 on Billboard’s Digital Songs Sales Chart.