Britney Spears and Sir Elton John have confirmed their collaboration single and everyone is freaking out.

Rumours started swirling that the two musical icons had been cooking up a storm in the studio last month, with sources teasing that it would be the ‘song of the summer’.

Well, it seems we won’t have long to wait until the track blesses our ears, as the pair have made the big announcement.

Hold Me Closer will be a new rendition of Sir Elton’s classic 1971 hit Tiny Dancer, marking Britney’s return following the end of her 13-year-long conservatorship.

The Gimme More hitmaker hasn’t released an official single since 2016’s Slumber Party, the video shoot for which she met her now-husband Sam Asghari.

But, fans are more than ready to eat up something fresh, especially after the pop queen shared a clip of her singing a new, more sultry version of debut single, Baby One More Time.

Well and truly breaking the internet by confirming reports that he had collabed with Brit, Sir Elton shared the artwork for Hold Me Closer, which simply features a heart and a rocket emoji.

He also shared the link for his 1.1million Twitter followers to pre-save the track, but didn’t offer and further details, leaving us all in suspense.

More information is due to be shared in the coming week, a spokesperson told the PA news agency.

Rumours of the high-profile collaboration were reported by US media outlets after the 40-year-old Toxic songstress reportedly met with the 75-year-old music legend and producer Andrew Watt at a Beverly Hills recording studio. 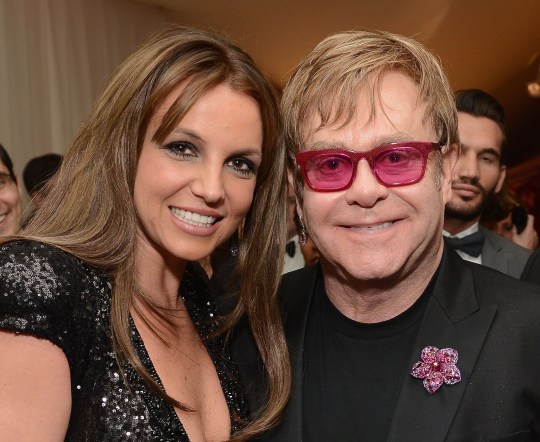 The collaboration is said to have been Sir Elton’s idea (Picture: Getty)

An insider close with the pair said that Britney is a ‘huge fan’ of the Your Song singer, and that it was actually Sir Elton’s idea for them to work together.

Speaking with New York Post newspaper’s Page Six column, they said: ‘This was Elton’s idea, and Britney is a huge fan. They have recorded a remix of Tiny Dancer as a full duet — and it is incredible.’

‘Britney was in the studio in Beverly Hills last week with Elton for the super-secret recording session overseen by über-producer Andrew Watt,’ they added.

Pal Paris Hilton – who attended Britney’s lavish wedding earlier this year – later teased the single as well, sharing that it would be ‘iconic’.

The exciting announcement comes as Britney continues her legal battle with her father Jamie Spears over his alleged misconduct during her conservatorship.

Last month, a US judge denied a motion by Mr Spears that the pop star should return to court to face further questioning over the controversial legal arrangement, which ended in November last year.

Judge Brenda Penny previously ordered that Mr Spears himself be deposed and face questions about alleged surveillance of the singer at her home.