Professor Brian Cox has shared a mind-boggling theory on This Morning that the universe as we know it might actually be a big hologram… and viewers are absolutely perplexed.

On Thursday’s edition of the ITV programme, Brian joined Eamonn Holmes and Ruth Langsford to discuss his upcoming tour, which he’s hoping will be able to take place in October having originally been planned two years ago.

During the interview, the physicist shared a fascinating hypothesis about how black holes could be connected to our reality, resulting in Ruth saying her mind was ‘blown’.

Brian, 53, explained that when people consider black holes, they may ‘think what have they got to do with the universe and nature, these completely collapsed stars, these weird things that we hear about in science fiction’.

‘But I’ll just say the answer, I’ll say what we’re beginning to suspect,’ he said, building the suspense.

‘By studying those and answering some questions that Stephen Hawking asked actually, over 50 years ago, we’ve come to the conclusion – and I’ll just say it out loud and then I’ll stop – that we might be holograms, that the universe might not be at all the way that we perceive it to be. It’s so strange,’ he stated. 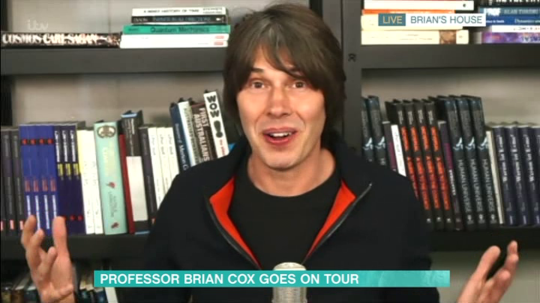 Ruth appeared particularly taken aback by this theory, explaining that as she was ‘never good at science’, she’s trying her best to wrap her head around Brian’s explanation of the theory.

‘You’re blowing my mind now you see, because I was never good at science anyway, and I’m trying really hard to follow you and keep up here. But that is mind-blowing,’ she said.

This Morning viewers were similarly baffled by the theory, with some poking fun at the idea.

‘I’m a hologram great… Can somebody please come and switch me off. Cheers,’ one person tweeted sarcastically.

‘So Brian Cox said we could be holograms…mind blown we could be Rimmers,’ someone else remarked, in reference to Red Dwarf character Arnold Judas Rimmer who appears as a hologram for the majority of the sci-fi sitcom.

So do you reckon the universe could be a hologram… or is the idea hogwash in your opinion? Have your say.

Earlier on the latest edition of This Morning, Eamonn and Ruth interviewed former star of The Apprentice Luisa Zissman, who had her pet horse stuffed after he died.

Luisa broke down in tears as she explained that she ‘couldn’t bear to never see him again’ after having to put him down due to his cancerous growths.

Eamonn and Ruth got into a heated debate about how they would commemorate their dog Maggie after she dies, with Eamonn saying he’s all for the idea of having her stuffed to preserve her.

‘I can’t think of anything worse,’ Ruth remarked.