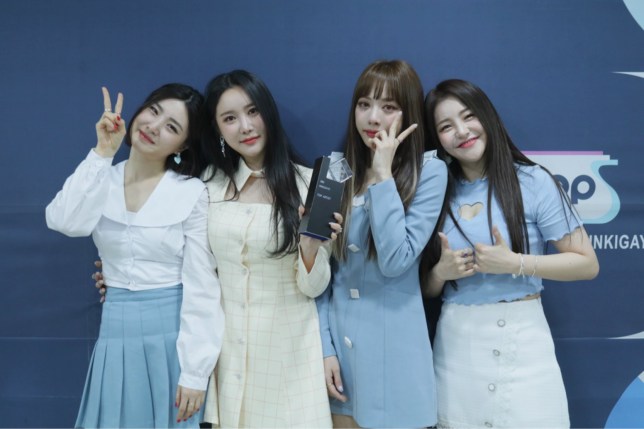 Brave Girls broke down in tears after picking up their first ever win on Inkigayo for Rollin’, four years after it was released.

The K-pop group’s current line-up – Eunji, Yujeong, Yuna and Minyoung – performed Rollin’ on Sunday’s show and finished in the top spot ahead of SHINee’s Don’t Call Me and Ateez with their comeback I’m The One.

It was an incredible moment for the members who became very emotional upon accepting the trophy, and fought back the tears as they performed again after winning.

They tweeted later in Korean and English: ‘I will never forget the very happy today you made.

‘Please stay with us for a long time the future! I love you.’

Rollin’ was first released in 2017, but recently went viral thanks to a YouTuber who edited the members’ performances of the song with YouTube comments. It has racked up over nine million views so far.

Minyoung previously said in an interview with tvX that she was ‘bewildered’ by the song’s resurgence which has seen it top the charts in South Korea.

‘We couldn’t believe that a song that we released so long ago was suddenly back in on the music charts,’ she said.

Eunji added: ‘Like the members said, we were all bewildered. We never dreamed that “resurgence” was a word that could apply to us.

‘This song is four years old, but so many people showed it love that we ranked No. 1 on Bugs and entered Melon’s 24Hits. It’s been a fun experience.’

Brave Girls debuted in 2011 under Brave Entertainment with the song Do You Know? and are known for being popular among members of the military, performing at a number of military shows.