The nine-year-old boy whose letter to Marcus Rashford went viral this week has slammed Boris Johnson, calling on the prime minister to take more action against racism.

Dexter Rosier moved thousands of people to tears this week when he wrote to the England player, telling the footballer he will ‘always be a hero’ following the vile racist abuse Rashford received after missing a penalty in the Euro 2020 final.

During Good Morning Britain today, the young football fan read out his message to Rashford to Susanna Reid, Richard Madeley and Ranvir Singh after the presenters were in tears by the letter on Tuesday’s show.

The letter read: ‘Dear Marcus Rashford, I hope you won’t be sad for too long because you are such a good person.

‘I’m proud of you, you will always be a hero.

But that wasn’t the only letter Dexter wrote this week as he also sent another one to Mr Johnson, claiming the PM isn’t ‘doing enough to about racial abuse’.

‘Personally, I think racial abuse online should lead to many people being banned from social media,’ he said in his address to Mr. Johnson.

‘If it’s happening face to face it should lead to warning of prison or other consequences. 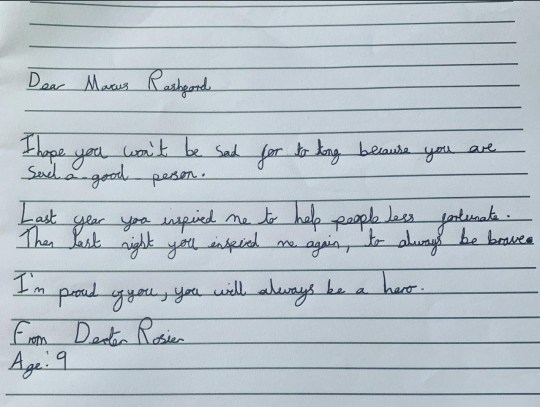 The young champ also explained he wrote to Rashford after England’s defeat to Italy.

‘After the penalty shootout, I was feeling afraid he was feeling sad because people were being mean about he was Black, I wanted to cheer him up,’ he said.

Mr Johnson condemned racism in England following the vile abuse aimed at Rashford and his teammates Jadon Sancho and Bukayo Saka, tweeting: ‘Those responsible for this appalling abuse should be ashamed of themselves.’

He also told racists to ‘crawl back under the rock from which you emerged’ during Monday afternoon’s press conference.

However, many critics were quick to highlight Mr Johnson’s previous remarks, comparing Muslim women to ‘letterboxes’ and describing Black people as ‘picaninnies with watermelon smiles’.

Home Secretary Priti Patel said she was ‘disgusted’ by the racism shown by some England fans just a week after defending those who booed England players taking the knee and calling the protest ‘gesture politics’.