As far as hooks to a teen rom-com go, you’ll be waiting a long time before you read one as wild as ‘shy wallflower finally has the high school night of her dreams before she is crushed by a moose on her way home and is now a ghost who everyone can see.’ I mean, wow.

This, naturally, involves teen stuff like making out, falling out and making up for falling out. All the good stuff.

We’ll level with you first: there are gaping flaws in this show.

It seems that the writers haven’t actually spoken to a teen in the past three decades, as every character seems ripped straight out of a 90s rom-com.

In fact, it was only when characters started talking about social media that the horrible realisation this was set in the modern day dawned on me.

This is compounded by some bizarre wardrobe choices which, again, no-one is wearing in 2022 and a soundtrack so generic it doesn’t pin it down further. 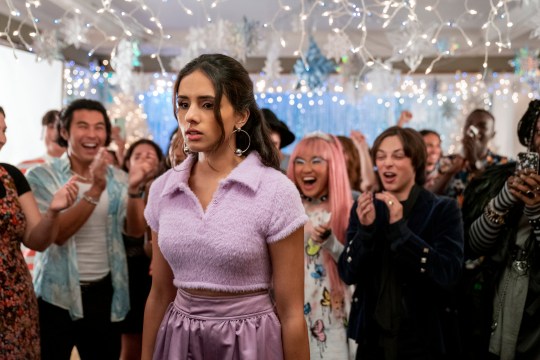 The dialogue, too, oscillates wildly between occasionally chucklesome and abhorrently dreadful within even the same scene.

Case in point: Erika and Gia’s annoying habit of making acronyms out of sentences that are way too long is a tired joke that repeats frequently.

All of this may lead you to think that Boo, Bitch is all a bit whatever. But those willing to stick with it will discover a real charm to it.

This is partly down to Condor and Colletti, who have an effortless chemistry together and can almost make some of the very worst lines passably funny – and there are some touching scenes as Erika tries to make amends with friends and family before she passes on.

There are plot holes that will clearly never be addressed, characters whose personalities turn on a penny completely out of nowhere.

It’s a real mood, as the children haven’t said for nearly a decade now and so would totally be a topical reference in Boo, Bitch.

This is absolutely dreadful, make no mistake, but heaven help us if it’s also not wildly entertaining.

Give it a go. It just might sneak up on you.