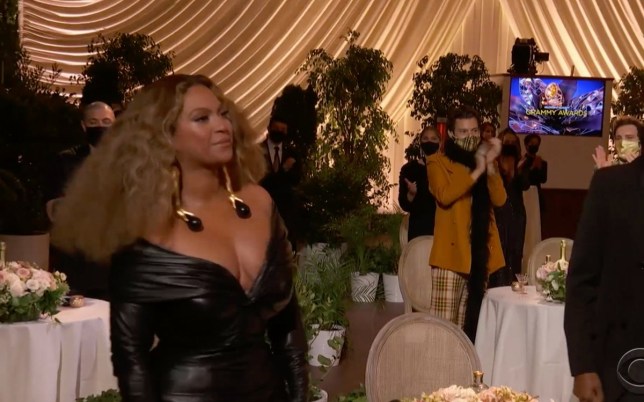 Beyonce and Harry Styles had a close encounter at the Grammys (Picture: CBS)

Beyonce and Harry Styles were pictured meeting for the first time and we’ve all officially gone to pop heaven.

The superstars shared the same atmosphere at the Grammy Awards on Sunday as Beyonce made history with her 28th win and Harry mesmerised us with his stunning performance of Watermelon Sugar.

At one point during the socially-distanced ceremony, a camera was able to catch them in the same shot with Harry seen at a table behind Beyonce and her husband Jay Z.

That was initially good enough for fans – until Queen Bey shared a photo of them meeting properly backstage apparently for the first time.

In the image posted on her Instagram, Harry and his trendy feather boa are seen engrossed in conversation with Beyonce, who appears to be fangirling with one hand raised to her mouth in excitement.

Or perhaps she was just fixing her face mask.

Either way, they look thrilled to meet each other but there isn’t anybody more excited about the photo than their fans.

‘I never knew I needed this in my life,’ one fan declared on Twitter as another reacted: ‘Harry and Beyonce? This is the best thing I’ve ever seen.’

One meme read: ‘That moment when you, a queen, come across another queen, and discuss how best to maximise your joint slay.’

‘Seeing Harry and Beyoncé in the same frame was like a breath of fresh air tbh,’ another fan said.

It’s been previously revealed how Beyonce inspired Harry’s live shows once he went solo. The Sign of the Times singer was unsure of whether to incorporate One Direction songs into his setlist but somehow Queen Bey helped him make a decision.

Music director Tom Hull once told Rolling Stone: ‘At first, he was definitely cautiously up for it. I feel like those [One Direction] songs are brilliantly written songs, and obviously it was a moment where we had a conversation.

‘Beyoncé does Destiny’s Child songs, so we were like, “Let’s do some of the songs that people will all know and everyone will love”.’