Below Deck star Tom Pearson was fired in the most recent episode after he put the boat in danger in tense scenes.

The deckhand joined the cast of the Sailing Yacht spin-off at the beginning of season three, working alongside Gary King, Daisy Kelliher and Colin MacRae.

Following a tough time on board, he made a huge error in a recent instalment, letting the boat drag while he was on anchor watch – with the yacht running aground in huge winds.

The rest of the team leapt into action as alarms blared, eventually moving the boat to safety and continuing on with the charter.

Captain Glenn Shephard lost all faith in his employee after the incident, and sat Tom down in the crew mess to give him his marching orders.

‘I’ve had a little bit of time to think about this and it’s quite clear that it took us quite a long time to drag,’ he began. 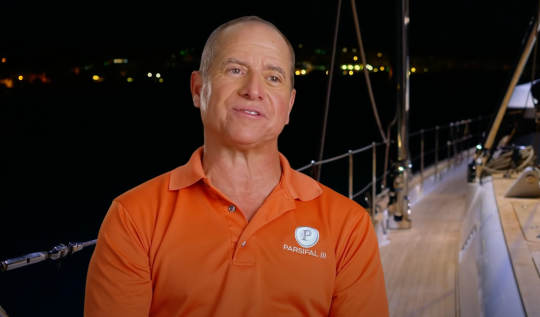 ‘I have no understanding of how you couldn’t notice it if you’re on anchor watch.

‘To me it’s impossible. The whole point of anchor watch is precisely to make sure that doesn’t happen.

Speaking in a VT, the captain said: ‘It’s really clear to me that Tom’s mind is in another place so it’s not like we can just let him stay because he can’t do any harm, he can still do harm in that mindset.

‘We’re not here to provide a job for Tom, we’re here to run a safe boat. That’s got to be first.’

The deckhand was instructed to get his stuff together and exit the boat within the hour, and returned to his cabin to call his mom.

‘Just let me say it while I’m here in front of you, that is not myself,’ Tom told his boss. ‘I’ve been going through some things as you know. And that really did affect me in what’s gone on.

‘I’m sorry that it couldn’t have worked out but it is what it is.’

‘I feel like this is going to be one of the biggest lessons of my whole life,’ he added to the camera.

‘I just want to start this whole season again and just do a f**king better job. You can’t slack in this game. I’ve learnt the hard way.’

A new deckhand will be taking his place in upcoming episodes – but will anyone else on the team get replaced?

There’s only one way to find out…

Below Deck Sailing Yacht is available to stream on hayu, with new episodes dropping on Tuesdays.