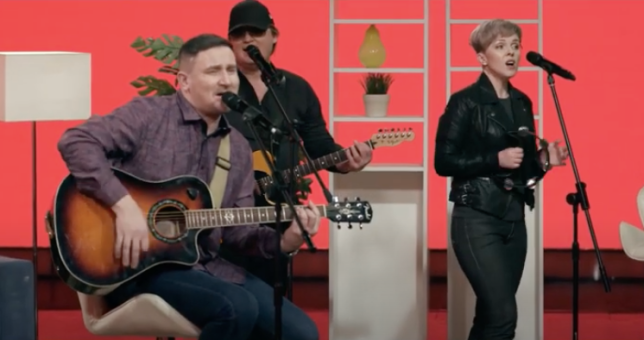 Belarus has been disqualified from the Eurovision Song Contest, over their ‘political’ lyrics.

Galasy ZMesta were internally selected to represent Belarus in the 2021 Song Contest, with their song Ya Nauchu Tebya (I’ll Teach You).

However, just weeks before the ceremony is set to kick off – in Rotterdam in May – the European Broadcasting Union (EBU) announced that they would no longer be appearing, after the group were asked to change their track.

‘On Wednesday 10 March we wrote to the broadcaster BTRC, which is responsible for Belarus’ entry for the Eurovision Song Contest, to request that they take all steps necessary to amend their entry to this year’s event to ensure it is compliant with the rules of the competition,’ bosses said in a statement.

‘Following this BTRC submitted a new song, by the same artists, within an agreed timeframe.

‘The EBU and the Reference Group, the Contest’s governing board, carefully scrutinised the new entry to assess its eligibility to compete.

‘It was concluded that the new submission was also in breach of the rules of the competition that ensure the Contest is not instrumentalised or brought into disrepute.

‘As BTRC have failed to submit an eligible entry within the extended deadline, regrettably, Belarus will not be participating in the 65th Eurovision Song Contest in May.’

This is the first time an act has been axed by Eurovision bosses over their song.

Competition rules state that ‘no lyrics, speeches, gestures of a political, commercial or similar nature shall be permitted during the Eurovision Song Contest.

‘No swearing or other unacceptable language shall be allowed in the lyrics or in the performances of the songs.’

Galasy ZMesta were previously asked to modify their lyrics or produce a new song altogether – but the new entry also ‘breached the rules’.

A number of Eurovision websites and fan sites announced plans to limit the coverage of the performance – as they suggested that the controversial song is propaganda for the Belarusian government agenda.

Lyrics translated to English include: ‘I will teach you to toe the line’, which is believed to mock the protests against President Alexander Lukashenko.

Critics of Lukashenko claim that his re-election in August was rigged to extend his 27 year rule – something he has denied.

The disqualification of the Belarusian group is the first time an act has been barred for competing.

Georgia withdrew their song, We Don’t Wanna Put It In in 2009 when it was perceived to be mocking Vladimir Putin and rejected by bosses.

The Eurovision Song Contest takes place on May 18, 20 and 22 in Rotterdam.