The original video, in which he drummed the iconic news theme song, was watched more than 6million times at the beginning of lockdown, lightening the spirits of viewers stuck at home.

It was so successful he even created his own Big House Band shortly after- with viewers sending in their clips from home to mash together into one hell of a killer orchestra.

So in order to mark the anniversary on Thursday night, Owain did it again – and it was just as epic the second time around.

‘Oh my, this is like deja vu isn’t it, maybe I’ll do it again!’ he joked before performing flawlessly.

He later tweeted: ‘LIVE Drum Smiling face with open mouth and tightly-closed eyes this was so much fun!’ 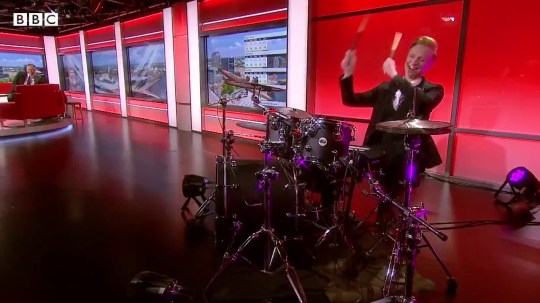 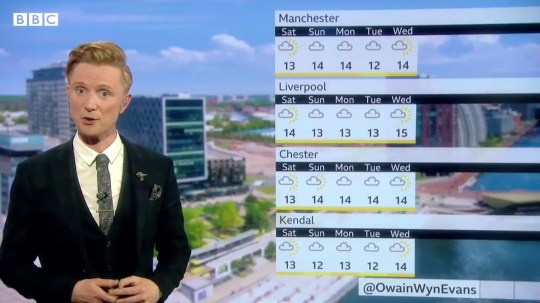 Forecaster Owain is usually giving viewers the heads up on the weather (Picture: BBC)

Speaking to Metro.co.uk back in March about the incredible response of his drumming abilities, Owain said: ‘I could tell quite quickly that it was going down really well. And I have been amazed by the response, it’s been fab.’

‘The thing about that video is, you’ve got this weatherman at the top of it in a nice suit presenting quite a flamboyant, camp forecast – and then I run over to the drum kit and start smashing them!’ he joked.

‘I guess one of the reasons why I did that video was because it was quite a scary time at the start of lockdown. People didn’t know what COVID-19 was really going into or what the next set of steps were.

‘Every now and then in my work as a weather presenter there are opportunities to bring a little bit of joy.’