The fleece is all yours if you get to go on Bargain Hunt (Picture: BBC)

If you’re a fan of daytime TV you will almost certainly have watched Bargain Hunt at least once in your life.

The show – which has been on air for over two decades, having first aired on the BBC in 2000, follows teams of contestants as they buy antiques at shops or fairs, to see how much of a profit they can make for them at auction.

Should you be lucky enough to take part, you’ll be issued with a special Bargain Hunt fleece – denoting whether you’re on the red or the blue team.

The question is – do those who take part on the show get to keep it as a souvenir?

Do Bargain Hunt contestants get to keep their red or blue fleece?

If you are keen on joining in the fun of Bargain Hunt. the good news is that contestants do indeed get to keep their red or blue fleeces.

The show’s own Bargain Hunt Twitter account confirmed this when asked, telling a fan in 2018: ‘Yes they get to keep the fleeces!’

This has also been corroborated on Reddit, with former participants of the show entering into the discussion.

‘I used to work on Bargain Hunt, can confirm that you get to keep the fleece,’ commented one user, Broad-Introduction96, while 14JRJ added: ”It’s a Regatta fleece, nice and warm. They snip the Regatta tag off the zipper before filming.’

That said, the fleece rule doesn’t always extent to celebrity particpants – at least not if the 2019 special featuring The Darkness and Feeder was anything to go by.

How can you apply for Bargain Hunt? 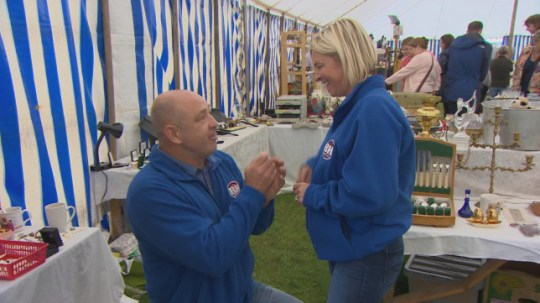 The show had its first ever marriage proposal back in 2016 (Picture: BBC)

If you want the chance to own your own fleece – oh and take part in the show of course, you can find out details here.

There’s no upper age limit to go on the show, but prospective participants have to be aged 18 or over – and fit for the challenge.

Anybody who is employed by the BBC or has recently worked for, or with the BBC is ineligible to take part.