Barenaked Ladies frontman Ed Robertson has opened up on Steven Page’s departure from the band, admitting it made him ‘question everything.’

Forming in 1988, Barenaked Ladies have seen huge success, not least for their creation of the theme tune for The Big Bang Theory and songs like One Week and If I Had $1,000,000.

However, in 2009, Steven Page left the band ‘by mutual agreement’, going it alone as a solo musician, and the band continued, now preparing to release their 16th studio album, Detour de Force.

Speaking about the most difficult times the band has faced, Ed told Metro.co.uk: ‘I think the longevity of this band is due to our ability to communicate with each other and so when we’ve had difficult times, we’ve worked our way through those times.

‘This isn’t a band that ever got so dysfunctional that we couldn’t ever survive it. We did get to a place in our relationship with Steve where we had to go our separate ways, and that was super difficult. It made me question everything about the band because it just wasn’t that fun anymore.

‘Even thinking, “Do I even want to make music anymore?” and realising that it was a broken relationship that had to be addressed. And I really did still want to be the guy in Barenaked Ladies because I loved all those songs I’d written and I loved all the time I’d invested into them and growing an audience.’ 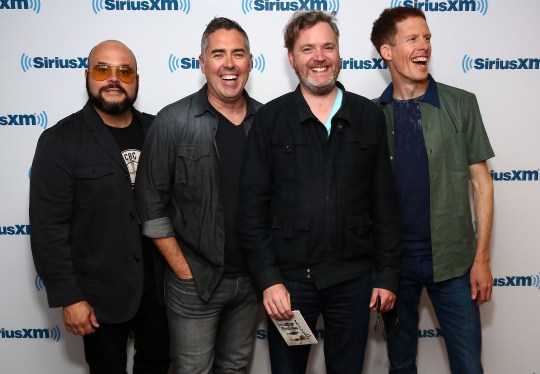 ‘I’d been writing songs with Steve for 20 years – we had built this thing together,’ Ed added of his former bandmate. ‘And it slowly got very, very broken. But I realised it was just my relationship with Steve that was very broken, and I think we found a way to move on from what was broken about the relationship and go [our] separate ways in the healthiest ways possible and continue to be creative in our own rights.’

True to his word, 12 years later, Barenaked Ladies are still smashing it, with the musician revealing that he can’t see himself ever retiring.

‘It’s too rewarding to keep doing this,’ he pointed out. ‘At this point in our careers, we’re surrounded by people who support us, we’ve got a crew of professionals that keep our instruments running – all we have to do is show up!

‘We play songs that we love and people sing along and clap – if you can’t continue to do that, there’s a problem.’

‘Just hanging out with the guys, the years of familiarity, and just the sheer joy of performance. It really fills my tank – I could do this for another 20 years,’ he grinned.

Ahead of releasing their new album Detour de Force, Barenaked Ladies have got no intention of slowing down.

‘I think what I’m excited about is that they’re going to hear songs like Live Well which are very emotionally vulnerable for me and it’s the band playing live together in a single room. It’s a live take.

‘So I think fans are going to hear the band they’ve grown to love performing in a way that sounds like only we sound – songs like Man Made Lake that are those stripped down, vulnerable performances, and then they’re also going to hear these expansive songs like in Internal Dynamo and New Disaster that are us pushing the production and pushing ourselves into these cool, energetic places that I think will be something new for everybody.’