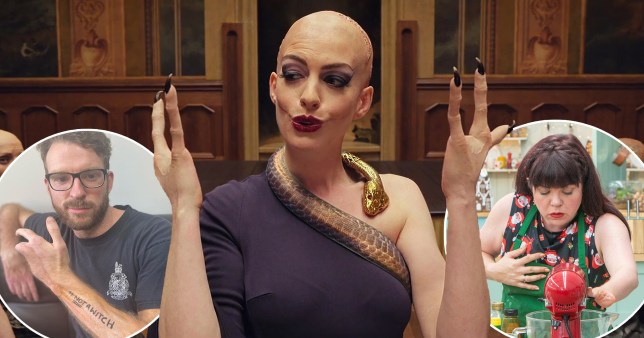 JJ Chalmers and Briony May Williams hit back at the portrayal of the Grand High Witch in The Witches (Picture: Warner Bros/Instagram/Channel 4)

Strictly Come Dancing’s JJ Chalmers and former Great British Bake Off star Briony May Williams have hit back at The Witches for its portrayal of limb difference.

Their comments come after Anne Hathaway and Warner Bros apologised for the character of the Grand High Witch being depicted with missing fingers on both hands in the latest adaptation of the Roald Dahl story.

Viewers had been left upset that the character’s hands were too similar to ectrodactyly, a congenital disorder which involves the deficiency or absence of one or more of the central digits of the hand or foot, and pointed out that the original illustrations from the book saw the witches with all five fingers, which had ‘claws’ that they hid using gloves.

Strictly star JJ, a former Royal Marine who was injured in a bomb blast in Afghanistan, shared a photo of the character and his own hand with fingers missing, with the hashtag #NotAWitch written on his arm.

He told his followers: ‘Whilst this depiction was not meant to offend, it is a classic example of the type of unconscious biases and carelessness that occurs in a creative environment that is lacking the insight and benefits of true diversity and representation.’

Bake Off’s Briony also shared a photo of her own hand, telling her followers: ‘This is really hard post for me to write. I’ve kept quiet about the controversy surrounding the depiction of the witches’ hands in the new film version of the Roald Dahl classic but I can’t anymore because it’s really got to me.

‘I want to point out a few things first and that is in the original book, the witches were not described as missing fingers, they had claws instead of nails which they used gloves to cover. In the 1990 version of the film, they didn’t give the witches missing fingers (as you can see in the pics).

‘When I look at the pictures of @annehathaway with her witch hands, it brings tears to my eyes because I see MY hand in the photos. I see my genetic disorder that caused me to be born without any fingers on my left hand. I see something to be afraid of, something meant to make you feel sick and revolted.

‘This isn’t about being overly sensitive, a “snowflake” or being too politically correct. This is about showcasing limb difference as ugly, scary, gross and evil. They didn’t need to do this, look at the book, the original film. How did they think this was acceptable?

‘I’m very proud of my hand, it’s taken me decades to get there but I am. When I was on Bake Off, I had people tweet me saying I look like the guy on Freddy Got Fingered.

‘I feel desperately sad for those people out there, especially children, with a limb difference who are ashamed of it or embarrassed because this will knock them harder than you know. I’m so pleased that people and charities are speaking up because it’s not ok.’

Anne Hathaway had shared a video from the Lucky Fin Project, writing: ‘Big thanks to the @Lucky_Fin_Project for allowing me to use this video.

‘I have recently learned that many people with limb differences, especially children, are in pain because of the portrayal of the Grand High Witch in The Witches.

‘Let me begin by saying I do my best to be sensitive to the feelings and experiences of others not out of some scrambling PC fear, but because not hurting others seems like a basic level of decency we should all be striving for.

‘As someone who really believes in inclusivity and really, really detests cruelty, I owe you all an apology for the pain caused. I am sorry.

‘I did not connect limb difference with the GHW when the look of the character was brought to me; if I had, I assure you this never would have happened.’

Anne continued: ‘I particularly want to say I’m sorry to kids with limb differences: now that I know better I promise I’ll do better.

‘And I owe a special apology to everyone who loves you as fiercely as I love my own kids: I’m sorry I let your family down.

Anne Hathaway and Warner Bros have both apologised for the depiction of the Grand High Witch having missing fingers (Picture: BACKGRID)

‘If you aren’t already familiar, please check out the @Lucky_Fin_Project(video above) and the #NotAWitchhashtag to get a more inclusive and necessary perspective on limb difference.’

Warner Bros, who made the film, also issued an apology, saying: ‘We the filmmakers and Warner Bros. Pictures are deeply saddened to learn that our depiction of the fictional characters in The Witches could upset people with disabilities, and regret any offense caused.

‘In adapting the original story, we worked with designers and artists to come up with a new interpretation of the cat-like claws that are described in the book.

‘It was never the intention for viewers to feel that the fantastical, non-human creatures were meant to represent them.

‘This film is about the power of kindness and friendship. It is our hope that families and children can enjoy the film and embrace this empowering, love-filled theme.’