Knowing what he needs! Bachelor star Matt James suggested that he’s looking into therapy after his split from Rachael Kirkconnell amid the end of his season.

James’ journey as the first Black Bachelor came to an end on Monday, March 15. Leading up to his shocking finale, frontrunner Kirkconnell was at the center of racism allegations. The 24-year-old was accused of mocking a former classmate’s interest in Black men, “liking” racist social media posts and wearing a racially insensitive costume at an antebellum-themed college formal on a former plantation in 2018.

Host Chris Harrison also drew criticism for defending Kirkconnell during his Extra interview with Rachel Lindsay on February 9. Days later, the 49-year-old broadcaster issued an apology for “wrongly speaking in a manner that perpetuates racism.” He then announced on February 13 that he was temporarily stepping down as the franchise’s host. 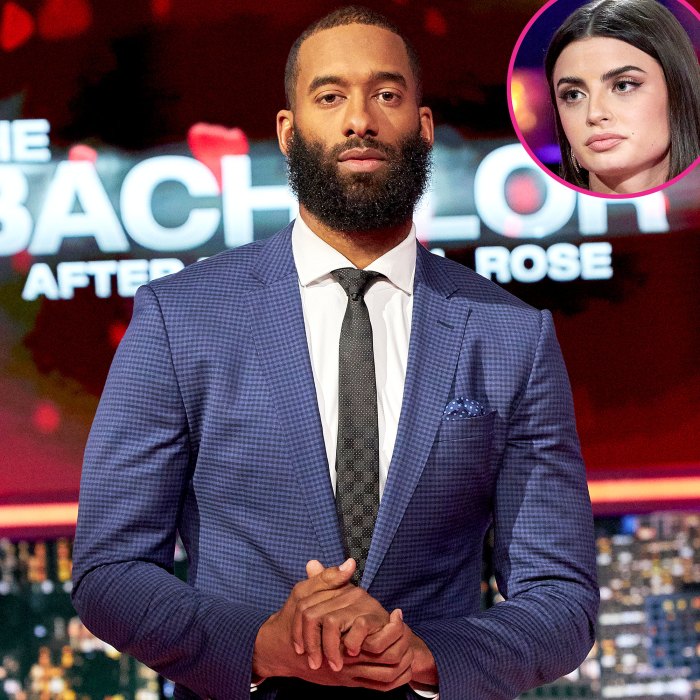 Matt James and Rachael Kirkconnell on ‘The Bachelor: After the Final Rose’. ABC/Craig Sjodin (2)

Kirkconnell broke her silence on the controversy on February 11 with an apology that acknowledged how her “ignorance was racism.” The Georgia native added, “Racial progress and unity are impossible without (white) accountability, and I deserve to be held accountable for my actions. I will never grow unless I recognize what I have done is wrong. I don’t think one apology means that I deserve your forgiveness, but rather I hope I can earn your forgiveness through my future actions.”

After James picked Kirkconnell over runner-up Michelle Young during Monday’s finale, the real estate broker revealed to After the Final Rose host Emmanuel Acho that they broke up over the scandal.

“The most disappointing thing for me was having to explain to you why what I saw was problematic and why I was so upset. … And so, when I questioned our relationship, it was in the context of you not fully understanding my blackness,” James explained to Kirkconnell during the After the Final Rose special. “I don’t want to be emotionally responsible for those tears, because it’s like, the work and the reconciliation that needs to be done is one thing I can’t do for you.”

Kirkconnell expressed how “really sorry” she was for the way she “hurt” her former flame.

“Once I really tried to put myself into your shoes as much as I could, I really do think that our relationship was very strong and the love that we shared was very real,” she told James. “So, for you to end things, I realize that that must’ve been really hard for you as well to where you must’ve been hurting.”

Toward the end of his season, James had an emotional confrontation with his estranged father. After the moment aired, the entrepreneur tweeted about how it “was hard to experience and it’s just as hard to watch” as well.

James’ friend and fellow Bachelor Nation star, Tyler Cameron, told Us Weekly exclusively on Tuesday that he believes his pal’s bumpy Bachelor journey will benefit him in the long run.

“I think it’s made him grow up a lot. I think he still believes in love. I think he’s still gonna find love, but it’s definitely a whole growing, learning experience,” the Florida native, 28, said. “He pushed himself a ton. He got himself very vulnerable and opened up and learned what good that can do for you, you know? So, I think it was a great learning experience. Everything’s a lesson in life and I think this was a giant lesson for him.”