Final curtain call. Artem Chigvintsev announced on Thursday, January 20, that he will be taking a break from the Dancing With the Stars tour for his health.

“Hi DWTS family – My time on tour so far has been wonderful – unfortunately I am having to step away from tour for a while, due to some unexpected health issues,” the. 39-year-old ballroom dancer wrote in a statement shared via Instagram. “My goal is to recover as quickly as possible so I can rejoin my cast and crew on this incredible tour.”

The Russia native continued: “Thank you for your patience and understanding. See you soon.” 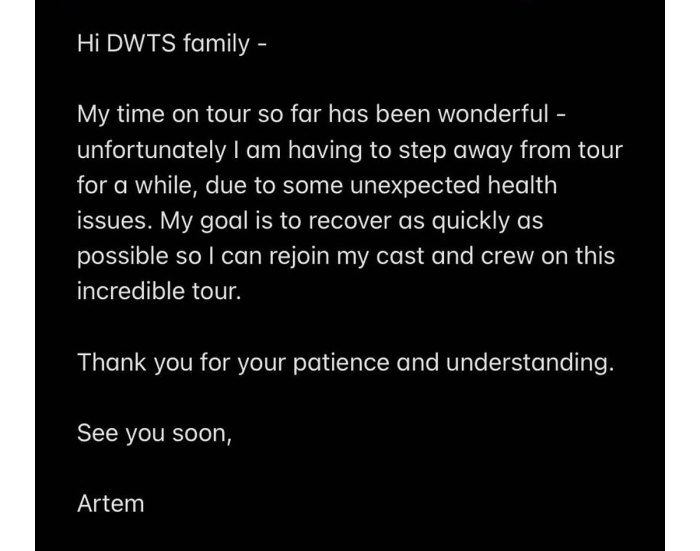 Chigvintsev received an outpouring of support from his fellow DWTS pros, including Daniella Karagach, who commented, “Wishing you a fast recovery. 🙏.”

Gleb Savchenko replied, “Please feel better, we all miss you so much and wishing you a speedy recovery 🙏🏼❤️,” while Alan Bersten wrote, “Love you brother. Get well soon.”

Specific details of the So You Think You Can Dance alum’s health scare were not revealed at the time. Shortly before Chigvintsev made his announcement, the official DWTS tour Instagram account praised the hard work of swings and understudies on the tour who’ve stepped up on short notice.

“✨Swing Appreciation Post✨,” the caption read. “If you’ve been in the audience of any of our shows thus far, chances are you’ve had the pleasure of seeing one or both of our amazing swings @alexis_warr & @kikinyemchek absolutely CRUSH IT on stage. As swings, Alexis and Kiki are responsible for covering ALL of the female and male tracks, respectively, and are ready to go on at a moment’s notice.”

The post concluded: “The talent, work ethic, courage, and dedication it takes to do what they do EVERY single night—especially in these unpredictable circumstances where dancers have to call out at the last minute—is extremely admirable. Help us show these superstars some love! 😍.” 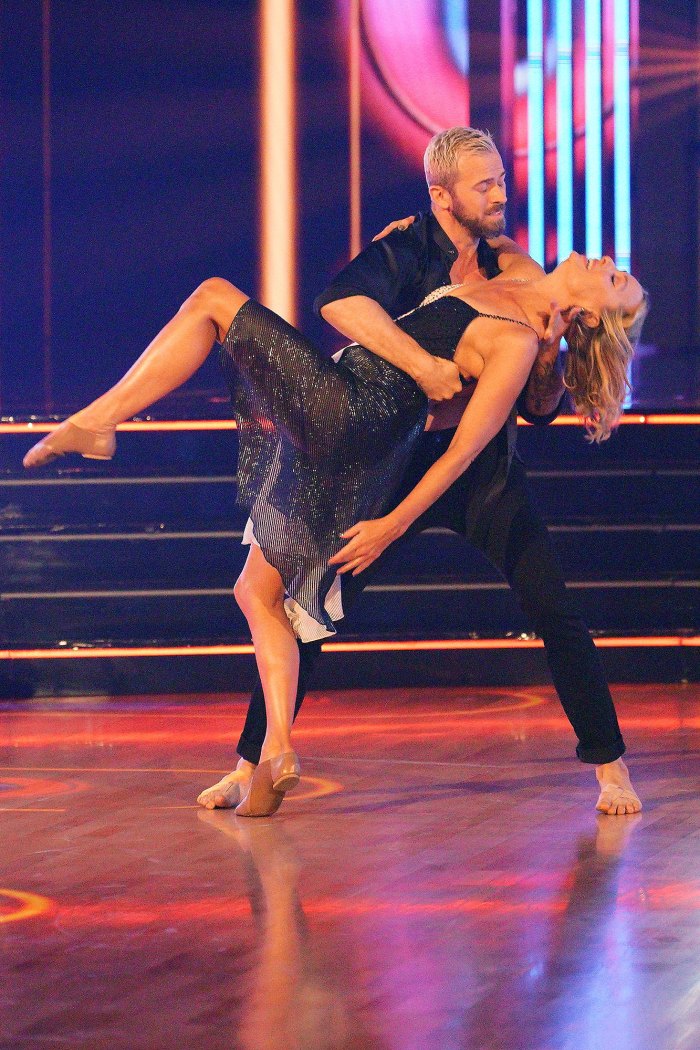 The season 29 DWTS champ joined the ABC competition show as a pro in 2014, then paired with Lea Thompson. He has been featured on nine seasons since making his DWTS debut, competing with now-fiancée Nikki Bella on season 25 in 2017. The couple announced their engagement in January 2020 and welcomed their first child, son Matteo, that July.

The pro wrestler, 38, and her twin sister, Brie Bella, each sent love to Chigvintsev on Thursday. Nikki shared her future spouse’s message via her Instagram Story, while Brie, also 38, commented on his post with prayer hands emojis and a red heart.

Last year, Nikki opened up about the challenges of raising a toddler amid her and Chigvintsev’s busy schedules, especially when their work brings them to different parts of the country.

“We’re actually in a good spot. We were doing a little rocky for a bit,” she said during an episode of “The Bellas Podcast” in November 2021. “[We] had to get back into therapy. You know, distance is really hard. … Now we’re stronger than ever.”