A GUEST on the Antiques Roadshow was left in tears after bringing her items to be valued.

The Welsh sports star played at Wimbledon throughout the 60s and 70s, and brought along some of her outfits from that period to be checked out.

Liz spoke to antiques expert Hilary Kay on the show, and the pair delved into the tennis outfits’ histories.

During their chat, Hilary asked Liz: “I mean, when you look at this, does it bring it all back?”

This caused the star to get a bit emotional, as she replied: “I have to say, it has now!”

She choked up as she uttered the sentence, with tears in her eyes, but managed to compose herself.

Hilary quickly interjected: “Well it should, it was a fabulous time!”

She added: “It seems almost a crime to have to put a value on them!”

Fans of the show watched on as Liz was delivered the verdict on her outfits’ value, stating that she seemed “absolutely livid”.

Hilary gave her honest opinion: “Look, the value of tennis dresses is not huge”, as Liz awkwardly smiled.

The expert added: “I would have said the most valuable one [dress] is going to be the Prince of Wales feathers there.

Liz looked shocked as Hilary continued: “The rest of them, and including perhaps the ones we’re not looking at here, the three or four others that you brought, I would have thought we’re talking about perhaps £800 to £1,000 for everything.”

Despite the sporting star’s polite smiles, viewers weren’t convinced that she was satisfied with the outcome.

One wrote: “She’s absolutely livid with that valuation #antiquesroadshow”.

“But in traditional #antiquesroadshow fashion, a rictus smile and pledge never to part with them, and all is well”.

Antiques Roadshow continues Sundays at 8pm on BBC One. 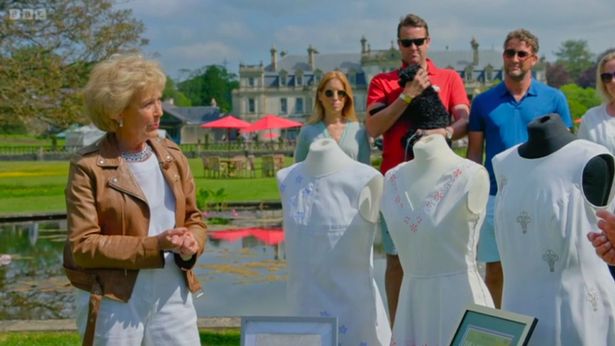 Hilary gave her valuation of the tennis dresses