One of the most anticipated reboots of recent years is well underway, with fans returning to the world of Sex and the City with the new series And Just Like That.

The show picks up with Carrie Bradshaw (Sarah Jessica Parker), Kristin Davis (Charlotte York) and Cynthia Nixon (Miranda Hobbes), with the women now in their 50s and facing new dilemmas.

Since its return, the follow up has shocked fans with its twist and turns (and full frontal reveals), as Carrie navigates grief and Miranda divorces Steve in order to explore her sexuality.

With scenes teasing the possibility of romance between the widowed Carrie and recently single Stever, fans are wondering just how the show will wrap up as it approaches its final episodes.

So, just how many episodes are there of the HBO show, and when can fans expect to see the much anticipated finale?

There will be 10 episodes of And Just Like That in total, with new episodes arriving every week.

The final episode of the series will arrive on February 3.

Instalments are released every Thursday on Sky Comedy and made available to stream on NOW.

The girls are back together (Picture HBO Max / BACKGRID)

Meanwhile, Sex And The City bosses revealed they initially made plans for a ‘beautiful last scene’ between Stanford Blatch and Carrie Bradshaw in And Just Like That… before Willie Garson’s death earlier this year.

In September, it was announced that the actor had died at the age of 57 after suffering from cancer.

It comes after Peloton removed the viral advert starring Noth from its social media in light of the allegations against him.

The star has vehemently denied the claims as ‘categorically false’.

Will there be a second season of And Just Like that? 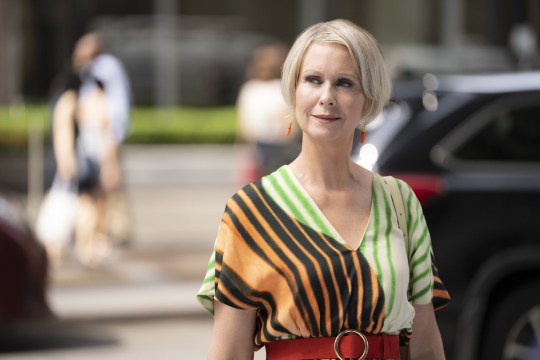 Cynthia Nixon’s Miranda in And Just Like That (Picture: HBO)

At the time of writing, there has been no confirmation as to whether a second series will be going ahead.

Showrunner Michael Patrick King has said that he would be interested in continuing the series, telling Emmy Magazine in December that he felt that the series does not offer a definitive ending for the characters.

‘I don’t know. As we were working, it always felt like the beginning. It didn’t feel like a beginning, middle and an end’ he said.

‘So I think it’s possible to keep going — if we have enough good stories.’

For further updates on the future of Carrie and the gang, watch this space!

And Just Like That airs on Sky Comedy and is available to stream on NOW.