Cynthia Nixon, Kristin Davis and Sarah Jessica Parker seen on the set of And Just Like That… (Picture: James Devaney/GC Images)

The new HBO Max Sex and the City series, And Just Like That, is almost here.

Flash forward 11 years later, and fans still can’t get enough of Carrie, Miranda, Charlotte and Samantha (and, of course, their endless sexcapades).

Original cast members Sarah Jessica Parker, Cynthia Nixon and Kristin Davis are all returning as their iconic characters – but Kim Cattrall sadly won’t be reprising the role of fan-favourite Samantha.

Part of the appeal of the show has always been the unwavering closeness between the four women through thick and thin.

But are they all as close pals as they seem on TV? Here’s what we know.

Are the Sex and the City cast really friends?

It does seem that the And Just Like That cast get along in real life.

Sarah Jessica Parker, aka Carrie, and Cynthia Nixon, who stars as Miranda, go way back. All the way back to their teens.

At ages 14 and 13 (respectively), SJP and Cynthia starred together in a TV movie for US network ABC called My Body, My Child.

In response to a flashback photo, Cynthia gushed: ‘@sarahjessicaparker has been one of my favourite acting partners for more than 40 years.’

SJP sent a lovely reply on Instagram, adding: ‘The memories of all my time with you sustains me.’

Kristin Davis, who plays Charlotte, appears to get along well with both Sarah Jessica and Cynthia.

At least, if their socials are anything to go by.

And also shared a sweet snap of her child dressed in a Sarah Jessica Parker-designed Gap backpack. ‘My 6-year-old is obsessed,’ she captioned the image.

Of course, there’s one noticeable absence from And Just Like That: Samantha actress Kim Cattrall.

During the show’s original run, Kim seemingly stayed at arm’s length from her co-stars, telling Piers Morgan on an episode of Life Stories that they were ‘never friends’ but instead ‘colleagues’.

A big issue that’s cropped up over the years is pay.

Executive producer Michael Patrick King confirmed on the Origins podcast that Sarah Jessica out-earned the other cast members during the six-year series.

He said in 2018: ‘The show doesn’t exist if Sarah Jessica wasn’t the blonde star of the show…

‘Kim was not at the height of her career, Kristin was under her in terms of notability, Cynthia was a theatre actress and their contracts reflected that status.’ 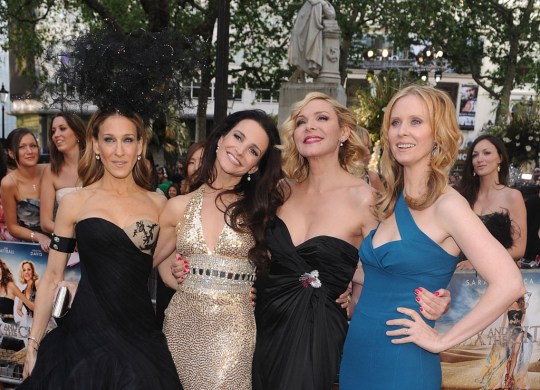 But all the way back in 2004, when the original series ended, Kim seemed to disagree with that idea.

She told Jonathan Ross at the time: ‘I felt after six years it was time for all of us to participate in the financial windfall of Sex and the City.

‘When they didn’t seem keen on that, I thought it was time to move on.’

An apparent feud between Kim and Sarah Jessica publicly bubbled up in 2017. 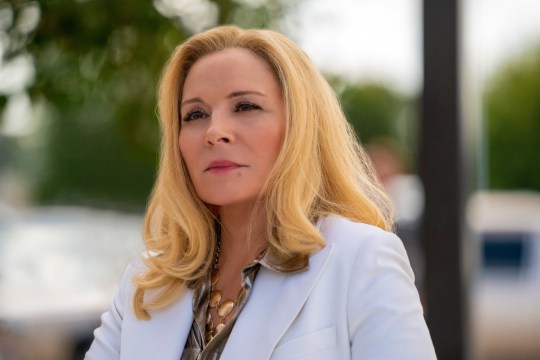 Rumours of a Sex and the City 3 movie were swirling – and in an interview, Sarah Jessica said she was ‘disappointed’ that a script for another feature-length story was left on the shelf.

Much ire was directed at Kim following the news it wouldn’t happen, who simply said she didn’t want to star in another SATC movie.

Things calmed down for a while – until the 2018 passing of Kim’s beloved brother, Chris.

‘I don’t need your love and support at this tragic time, @sarahjessicaparker,’ Kim fumed online.

‘Your continuous reaching out is a painful reminder of how cruel you really were then and now. Let me make this VERY clear…

‘You are not my family. You are not my friend. So I’m writing to tell you one last time to stop exploiting our tragedy to restore your ‘nice girl’ persona.’

Later that year, Sarah Jessica dismissed claims of a ‘catfight’ in a chat with Extra, saying: ‘I never fought with Kim…

‘This is someone who chose to talk about something and myself, I remain grateful for her work and the role she played on and off camera for all the years we spent together.’

And in 2021, on announcement of And Just Like That, Sarah Jessica clapped back at a fan on Instagram – who said she ‘disliked’ Kim or her character.

‘No,’ SJP wrote in a comment. ‘I don’t dislike her. I’ve never said that. Never would. Samantha is not part of this story. But she will always be part of us.’

Apparently, Samantha will be off living her best life in London for the purposes of the new programme.

And Just Like that will air on Sky Comedy and NOW TV from Thursday, December 9.