AMANDA Holden and Susanna Reid have the ‘best bums’ in the world according to the Golden Ratio equation.

The Britain’s Got Talent judge and Good Morning Britain presenter, both 49, have been found to have the perfect ‘Golden Ratio’ bums by Dr Riccardo Frati who analysed the bottoms of leading celebrities. 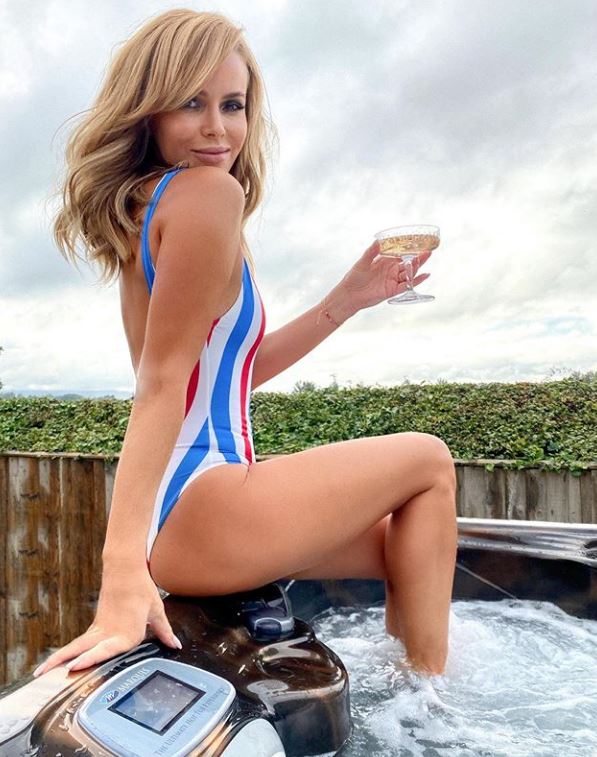 Amanda Holden has the ‘world’s best bum’, according to the Golden RatioCredit: instagram.com/noholdenback

TV beauties Michelle Keegan and Laura Tobin also scored highly – based on the theory – a system developed by the ancient Greeks to measure physical perfection.

The ancient Greeks claimed there was a Golden Ratio for all things when they approached perfection.

Dr Riccardo Frati of Frati Cosmetic Surgery says according to mathematics of beauty, the ‘perfect ratio’ for the bottom – waist – breast should be 3:2:3 and the perfect upper hip to lower hip ratio is 6:4.

The mathematical equation known as Phi sees the ideal bum proportion as 3:2:3. 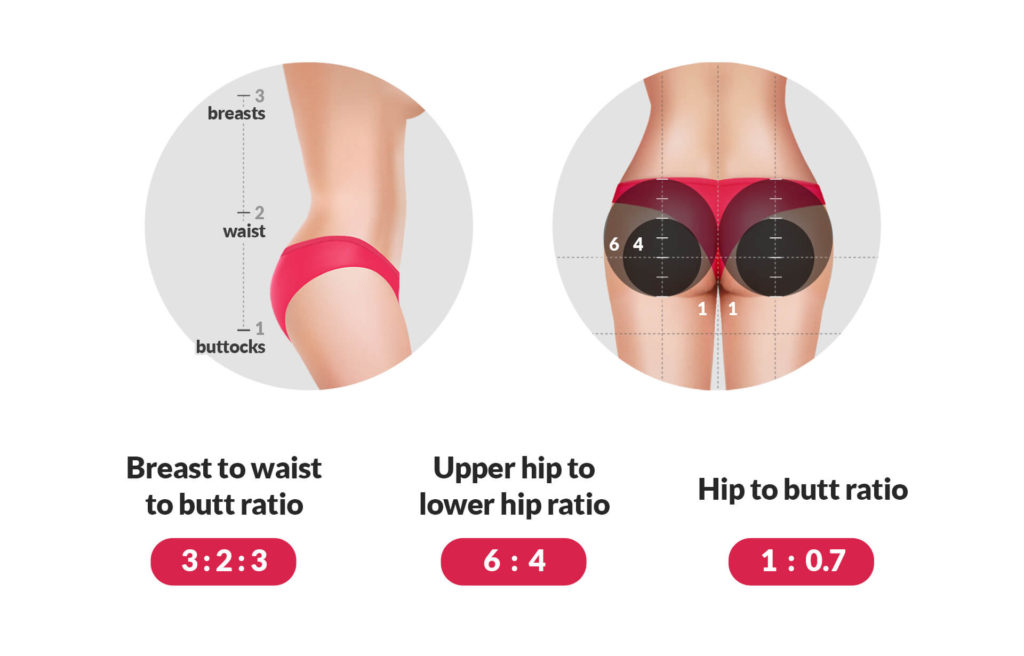 The ratio measures the breast to waist to butt ratio

While the ratio was used by Leonardo Da Vinci for the perfect human male body in his famous work the Virtruvian Man, it can actually be applied to anything.

The idea is that the closer the ratios of a face, body part or room are to the number 1.62, the more beautiful it becomes.

Dr Frati compiled a list to see how modern celebs bums’ matched up, according to the formula. 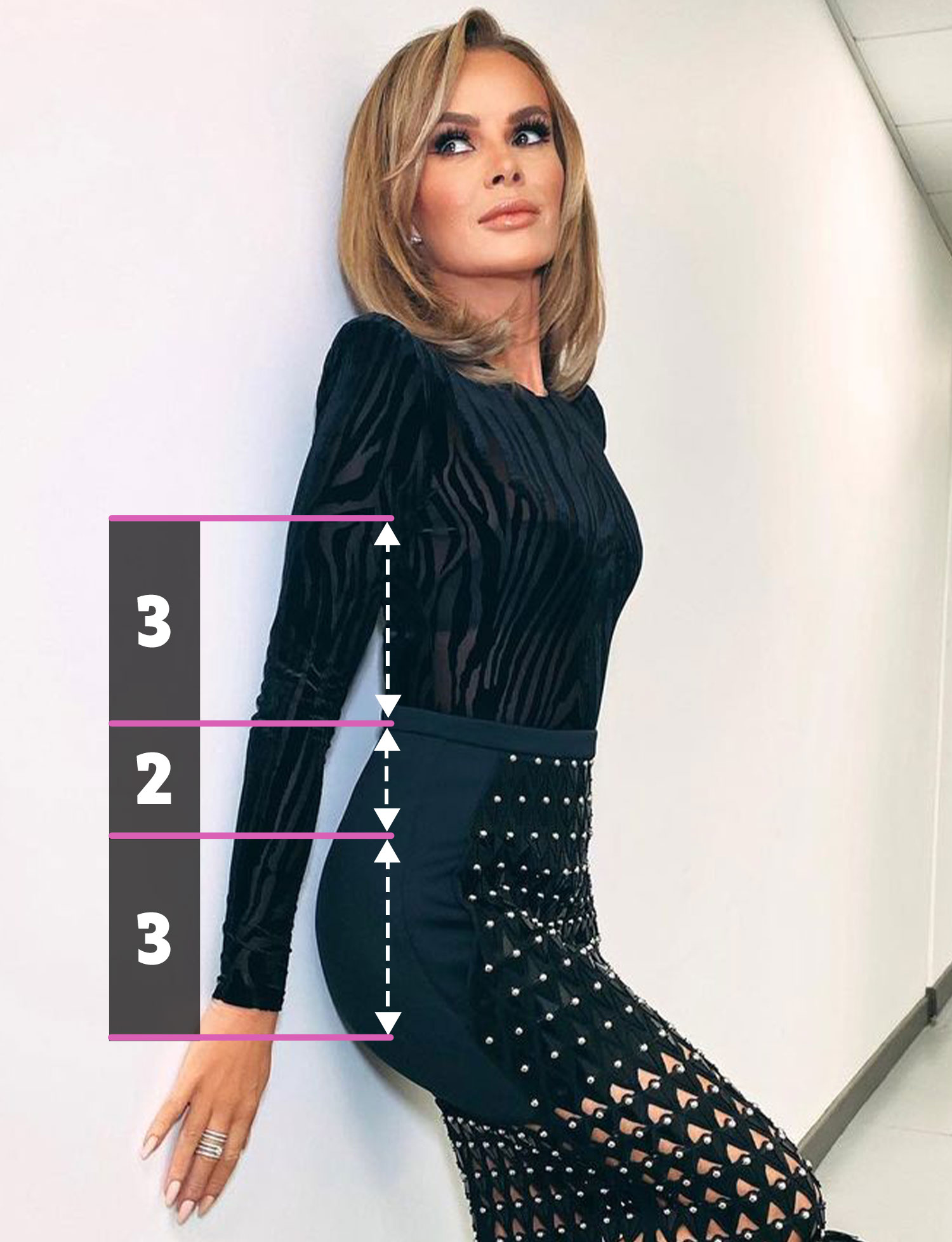 This star’s bottom is scientifically “perfect” – with a 3:2:3 Golden Ratio equation.

Dr Frati believes the Britain’s Got Talent star has a “natural” looking bottom with the “perfect” ratio.

He says: “Amanda looks spectacular for her age. Her breasts look natural as does her bottom and she has been a stable weight over the years.

“Her bottom looks in the perfect 3:2:3 ratio and she looks naturally proportionate yet feminine.

“Amanda is known to love yoga and running, which will definitely contribute to her youthful look.” 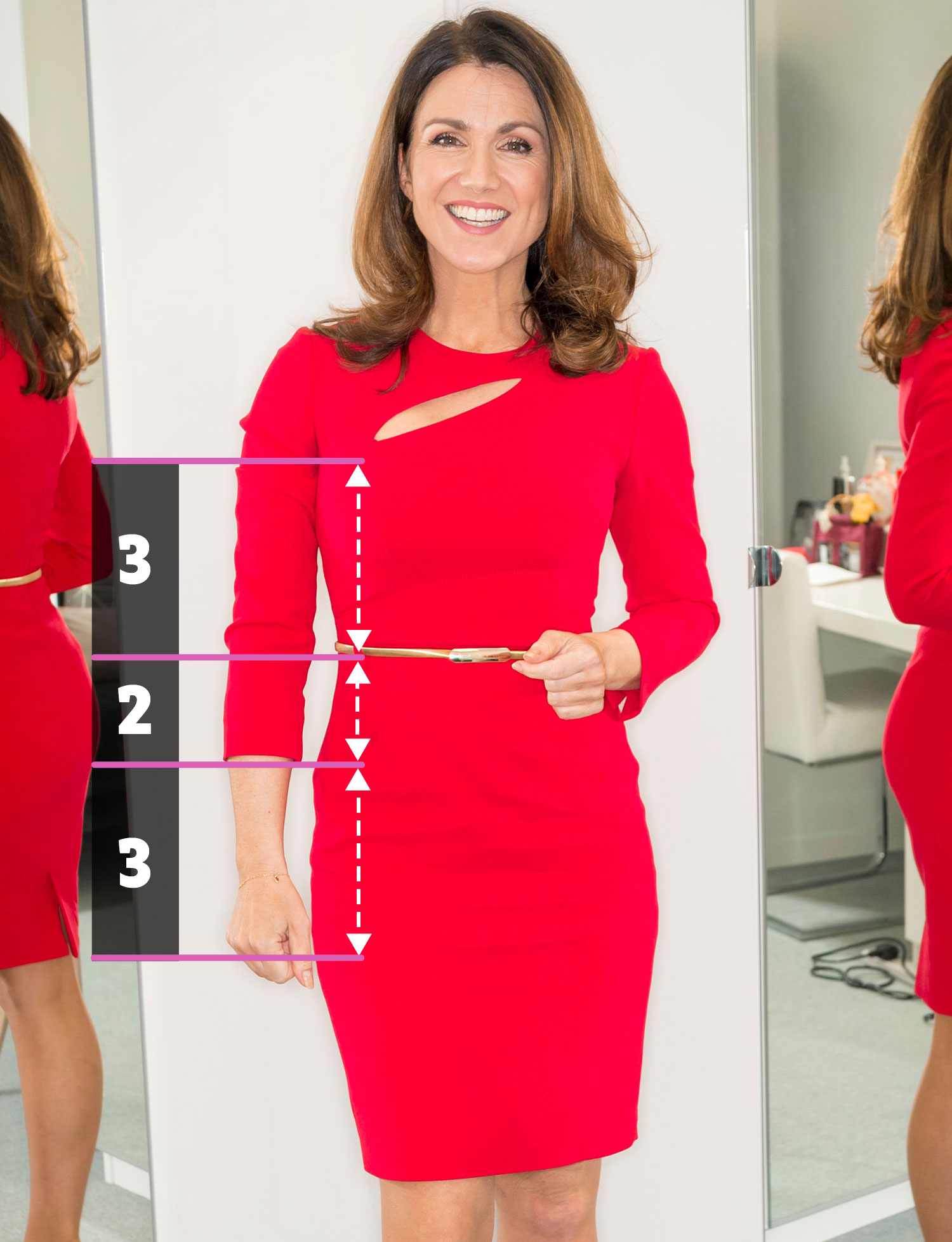 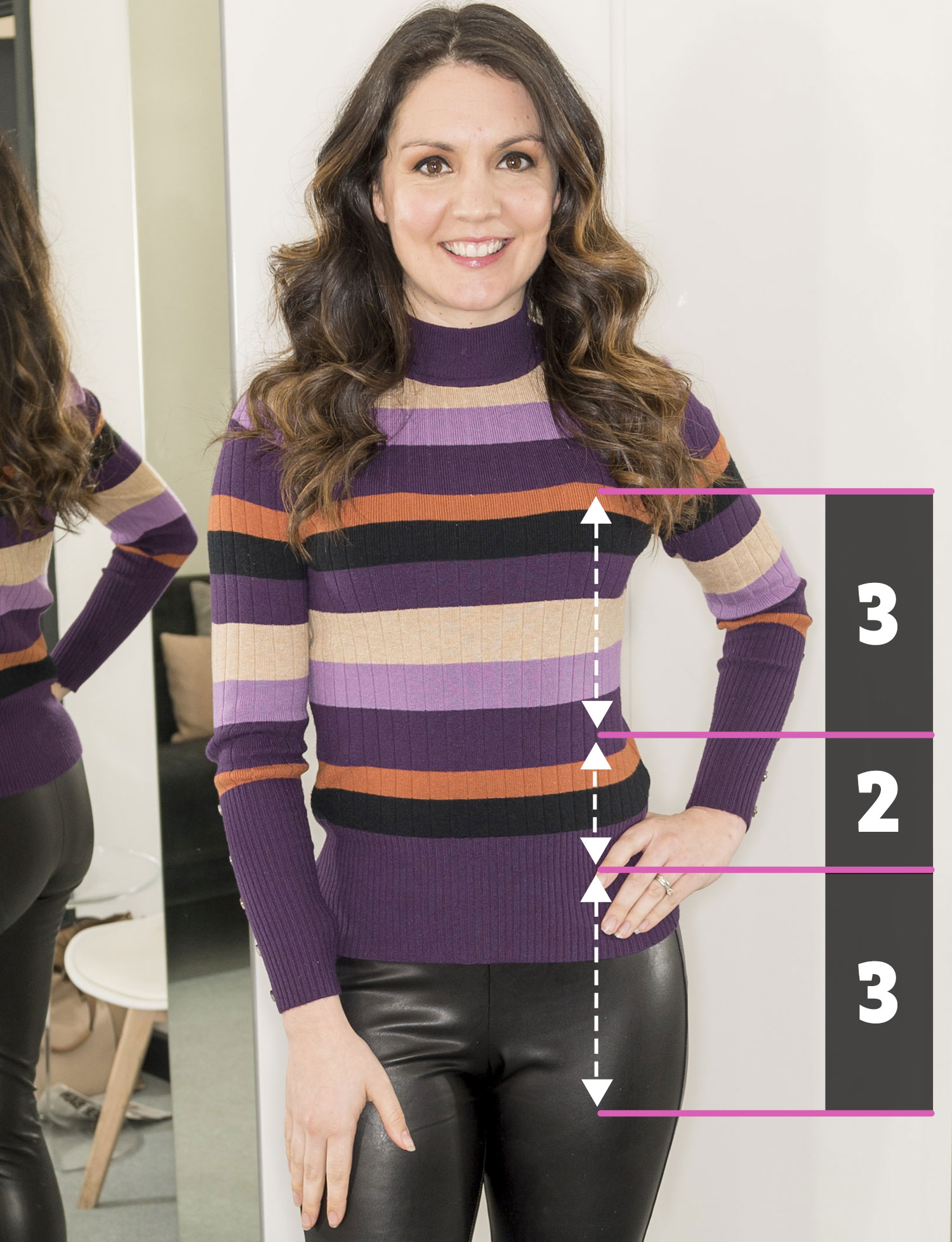 As did Laura Tobin

These ITV beauties’ bums also scored highly according to the formula.

Dr Frati believes both of their bottoms’ have a 3:2:3 ratio.

He says: “Similarly to Amanda Holden, Laura and Susanna have looked after themselves well and maintained a 3:2:3 ratio.

“To ensure they are looking supple and pert I would imagine they partake in 4-6 hours of exercise per week and live healthy lifestyles.

“Susanna in particular has revealed she has quit alcohol and looks much better for it.” 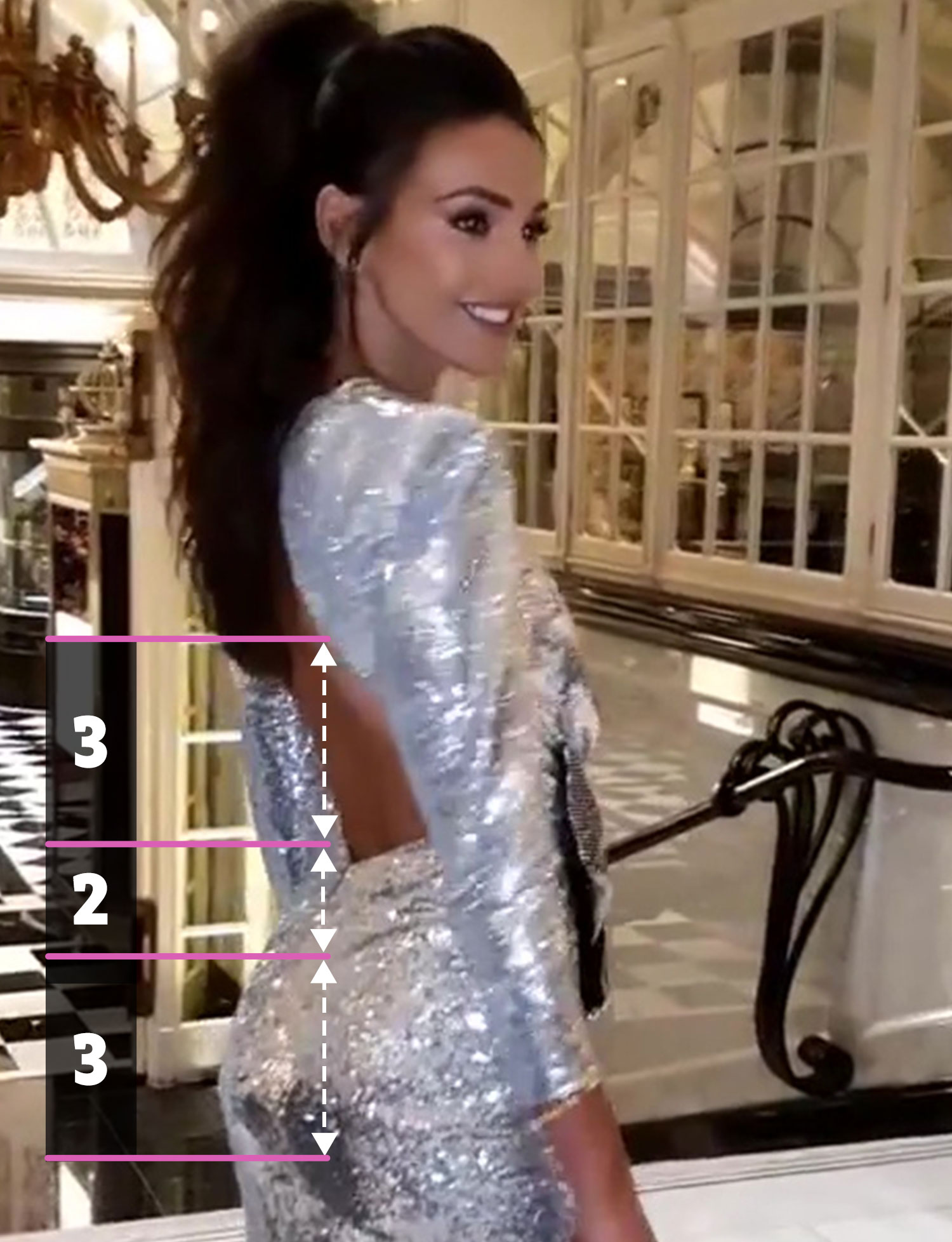 According to the ratio, Michelle Keegan is another star with a scientifically “perfect” bum.

Dr Riccardo Frati says: “Michelle has the perfect 3:2:3 figure, it’s possible that she may have had some ‘tweakments’ but she is renowned for living a super healthy lifestyle.

“She eats clean and trains hard – it shows, she looks womanly and appears to be glowing from within.” 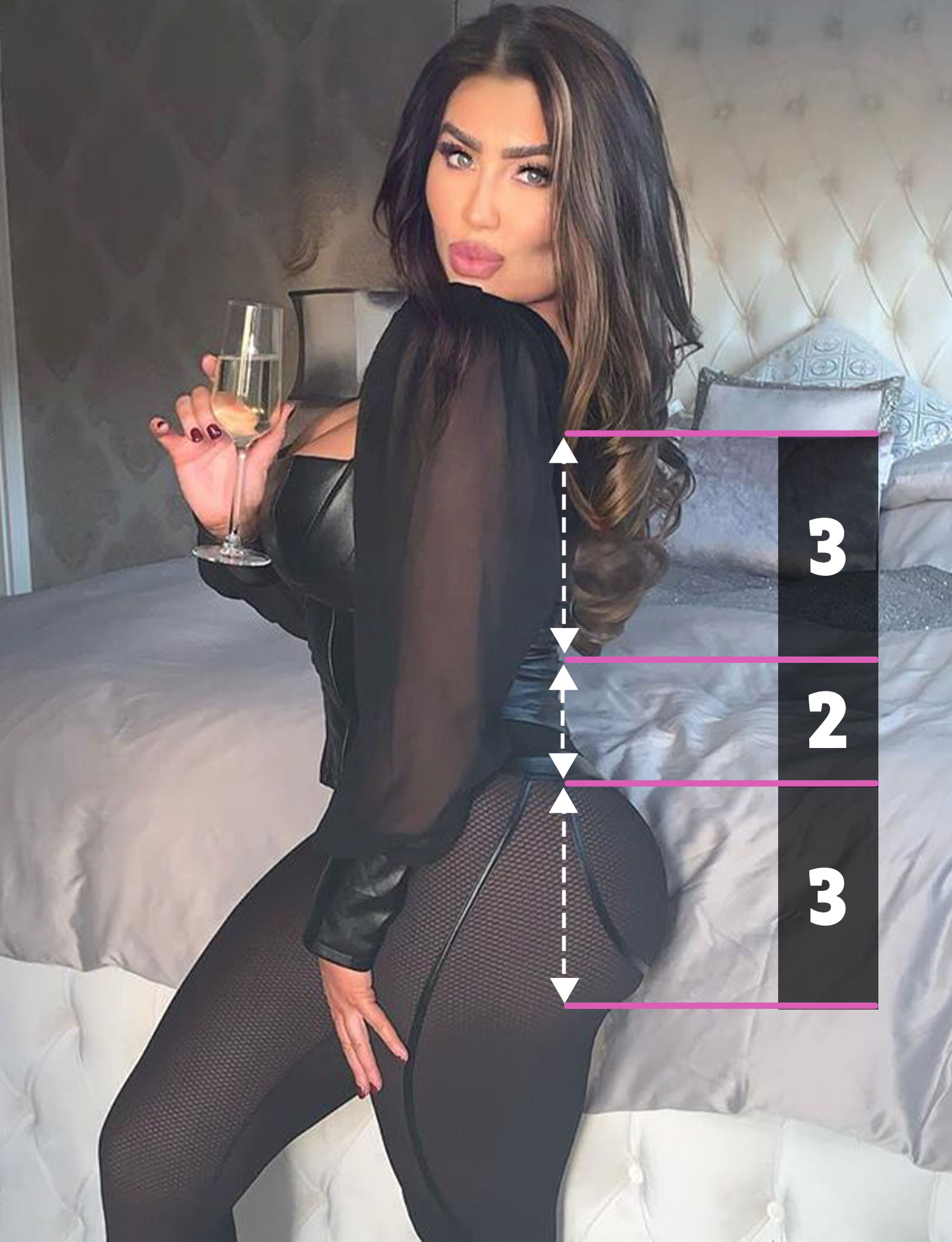 However he noted that she looks slightly different – from picture to picture. He added that her “peach” effect could increase her golden ratio ranking.

Dr Frati says: “Lauren has a peach effect with her lower back significantly smaller than the largest part of the hips and buttock.

“The hip to waist ratio is an enhanced hourglass look.” 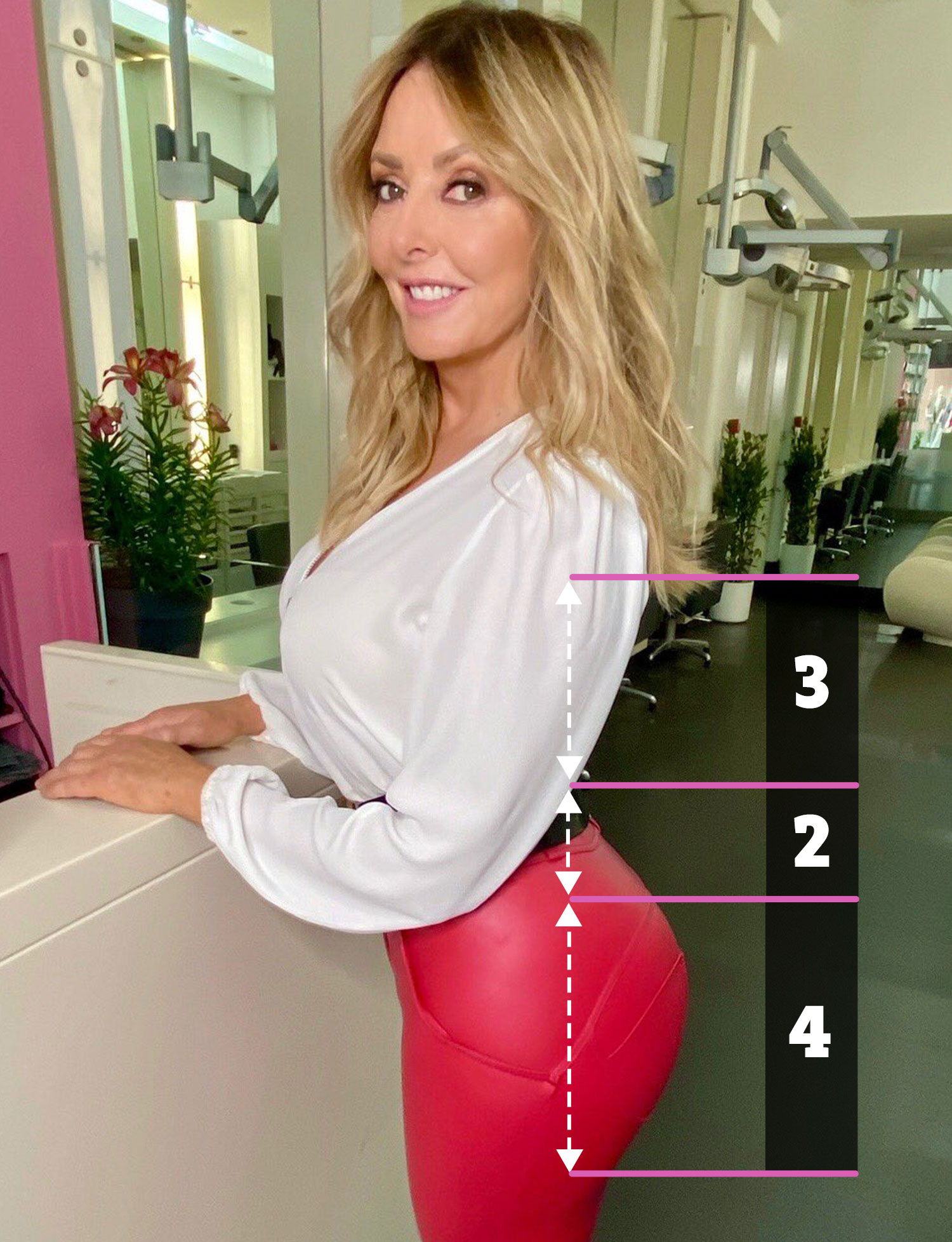 Carol has an enviable hourglass figure

Dr Frati says Carol Vorderman’s bum is nearly perfect, according to the golden ratio equation but her upper hip to lower hip ratio is higher than “typically normal”.

The cosmetic surgeon comments: “Carol looks like she may have been surgically enhanced as her upper third is significantly bigger than the lower third, creating an hourglass from the front, and provenance from the side.

“I would say her bottom – waist – breast ratio is 3:2:4 and her upper hip to lower hip ratio is higher than ‘typically normal.'” 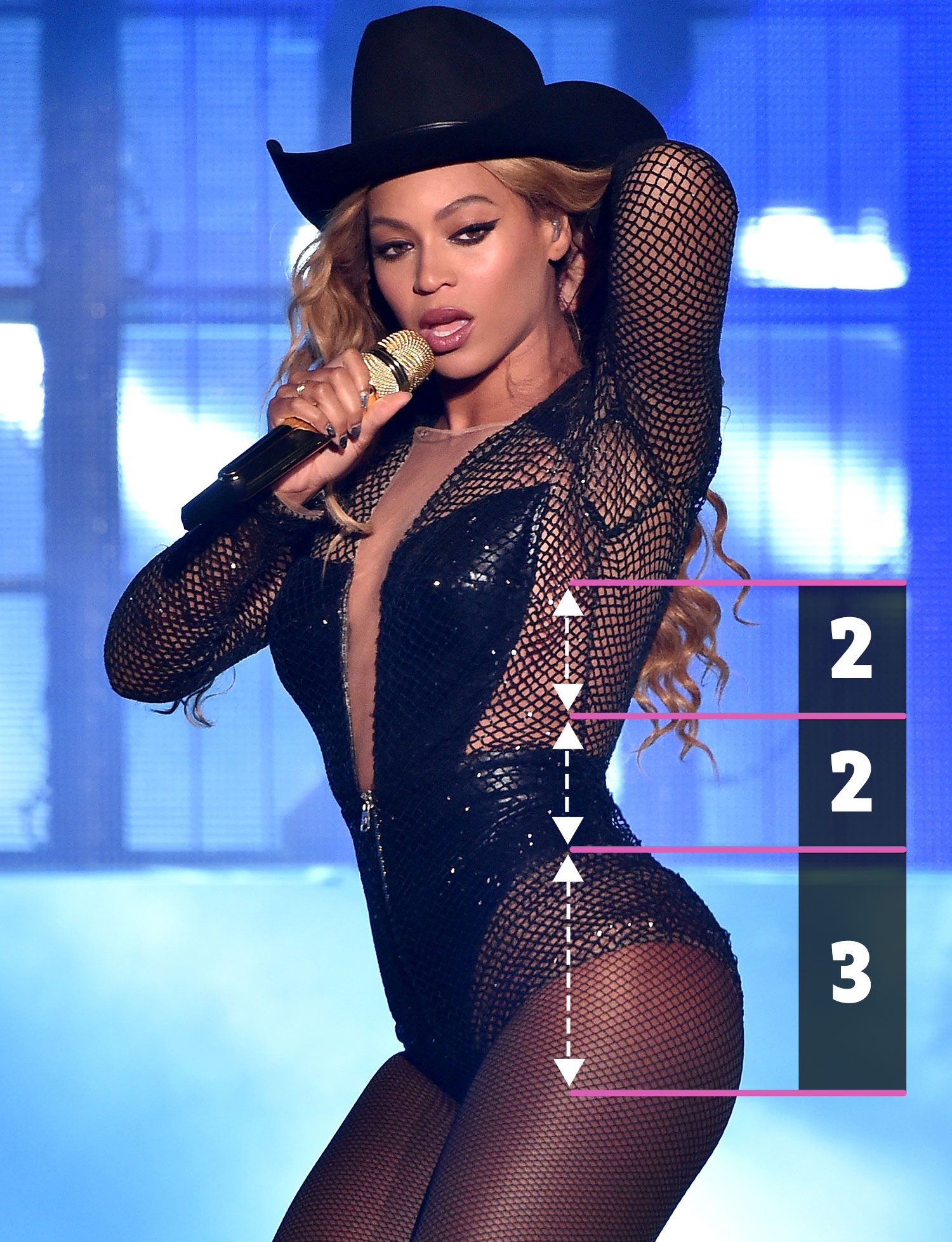 The cosmetic surgeon also commented on singing sensation Beyonce’s bottom – which was given a 2:2:3 ratio using the formula.

Dr Frati says: “We rarely see much of Beyonce anymore, but studying recent pictures she is looking well for 39, she probably has a 2:2:3 ratio.

“Her hips are a prominent feature which seem to have grown from her Destiny’s Child days. This could be part of motherhood as bone structure can change after pregnancy, making women’s hips slightly wider.

“Added weight during pregnancy can also play a role, so this may have attributed to her slight change in body shape.” 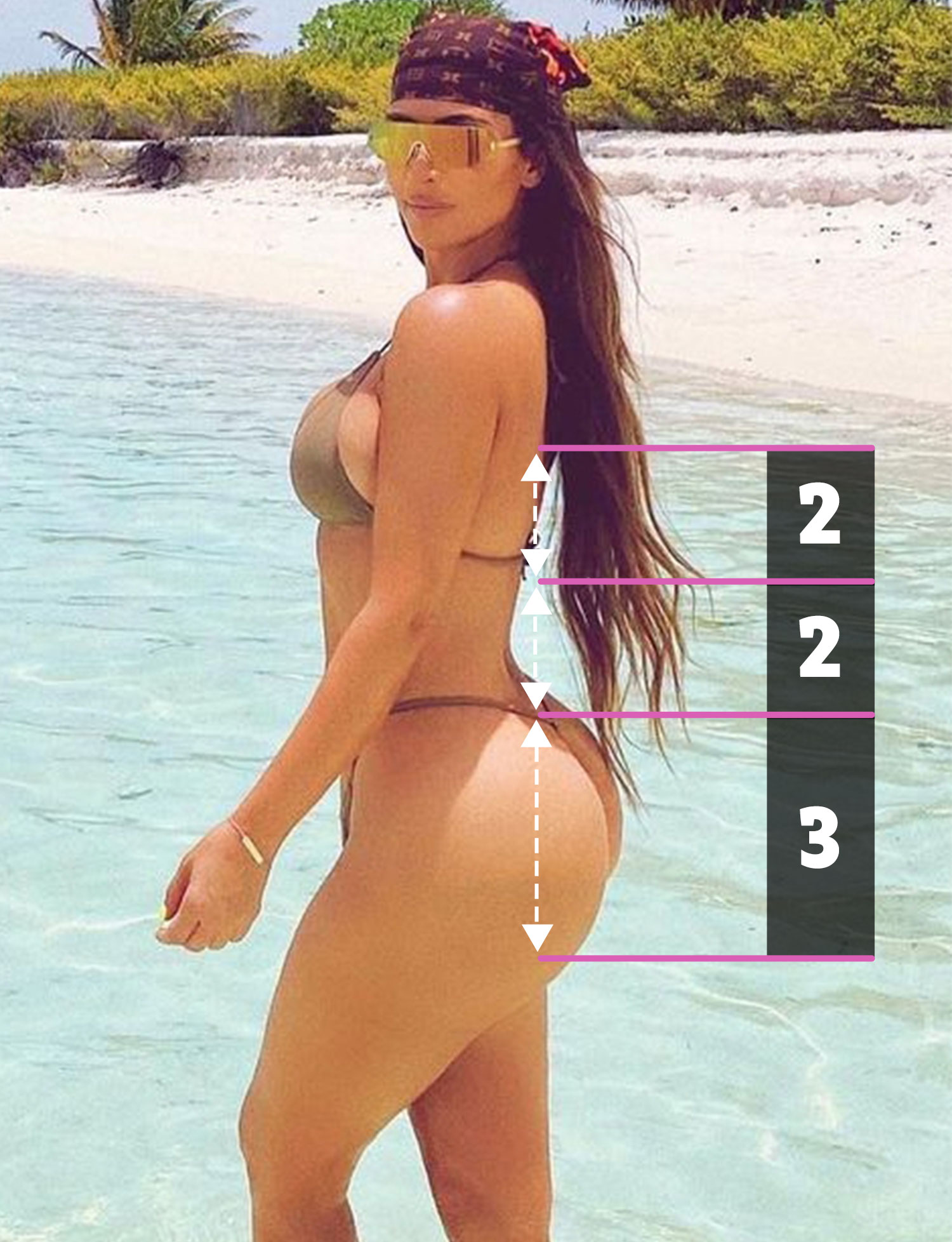 Kim Kardashian has the most famous bum in the world

Dr Frati gave her a 2:2:3 equation, similarly to Beyonce.

He says: “Kim’s ratio is 2:2:3 and like Beyonce, pregnancy could have attributed to this.” 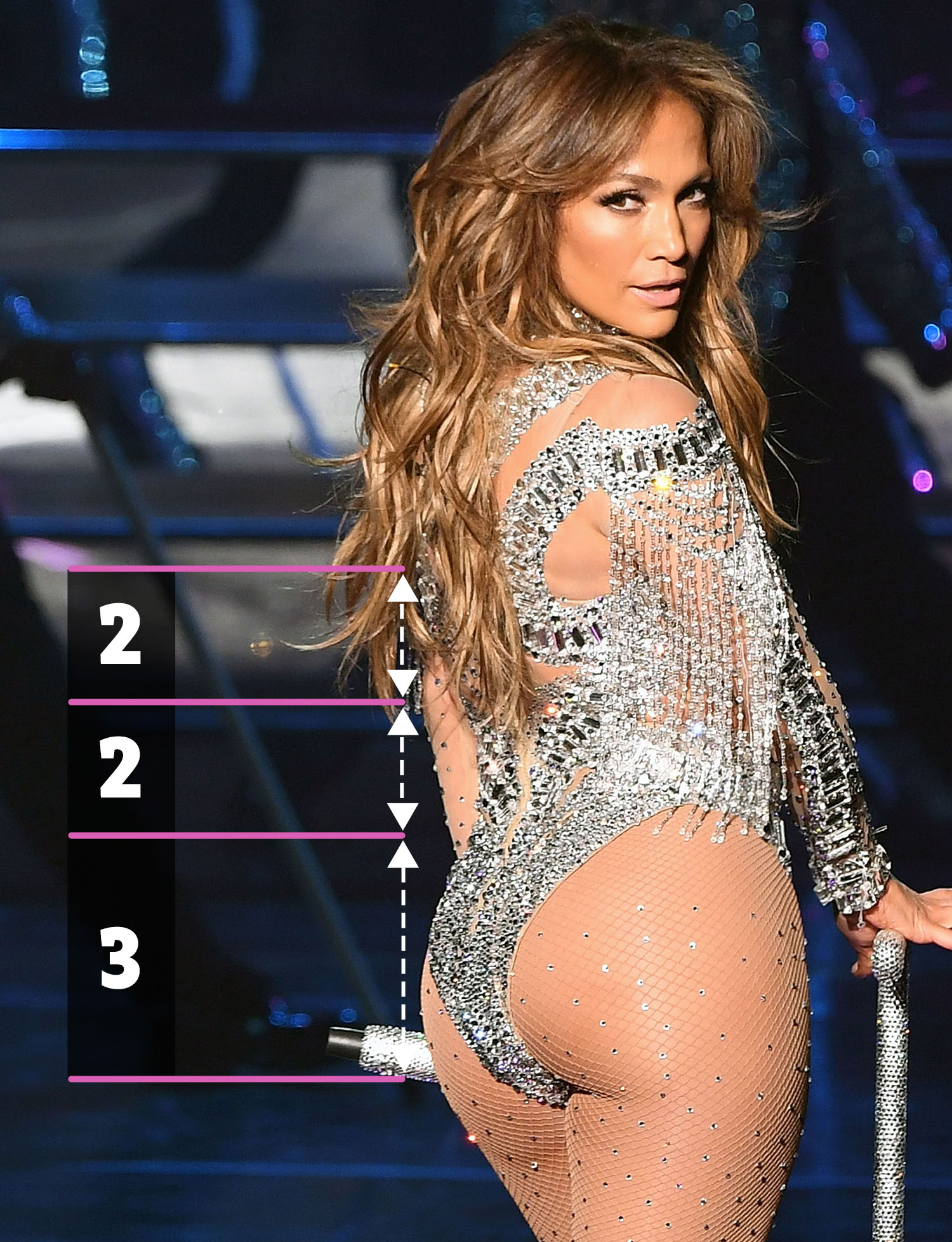 Jennifer Lopez’ bottom was also given the same ratio as Kim Kardashian’s and Beyonce’s – and Dr Frati says the 51-year-old is truly “defying gravity.”

He comments: “J’Lo maintains a very supple 2:2:3 ratio, she avoids all processed foods, sugars, caffeine and alcohol and is rumoured to be a fan of Hollywood’s fountain of youth drug Human Growth Factor.

“Hormones are linked to collagen production and monitoring and balancing these can have a significant effect on every aspect of your life and appearance.” 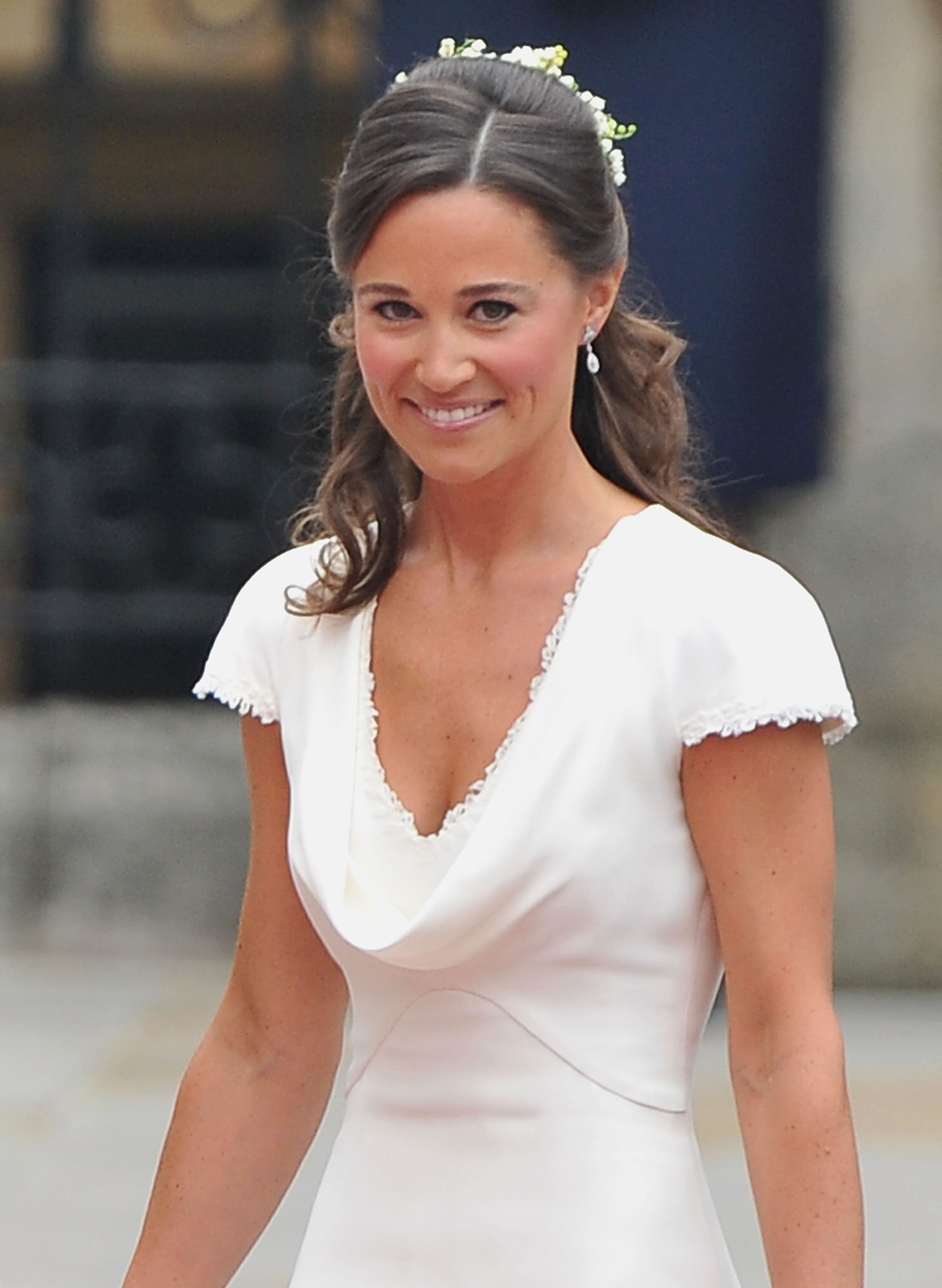 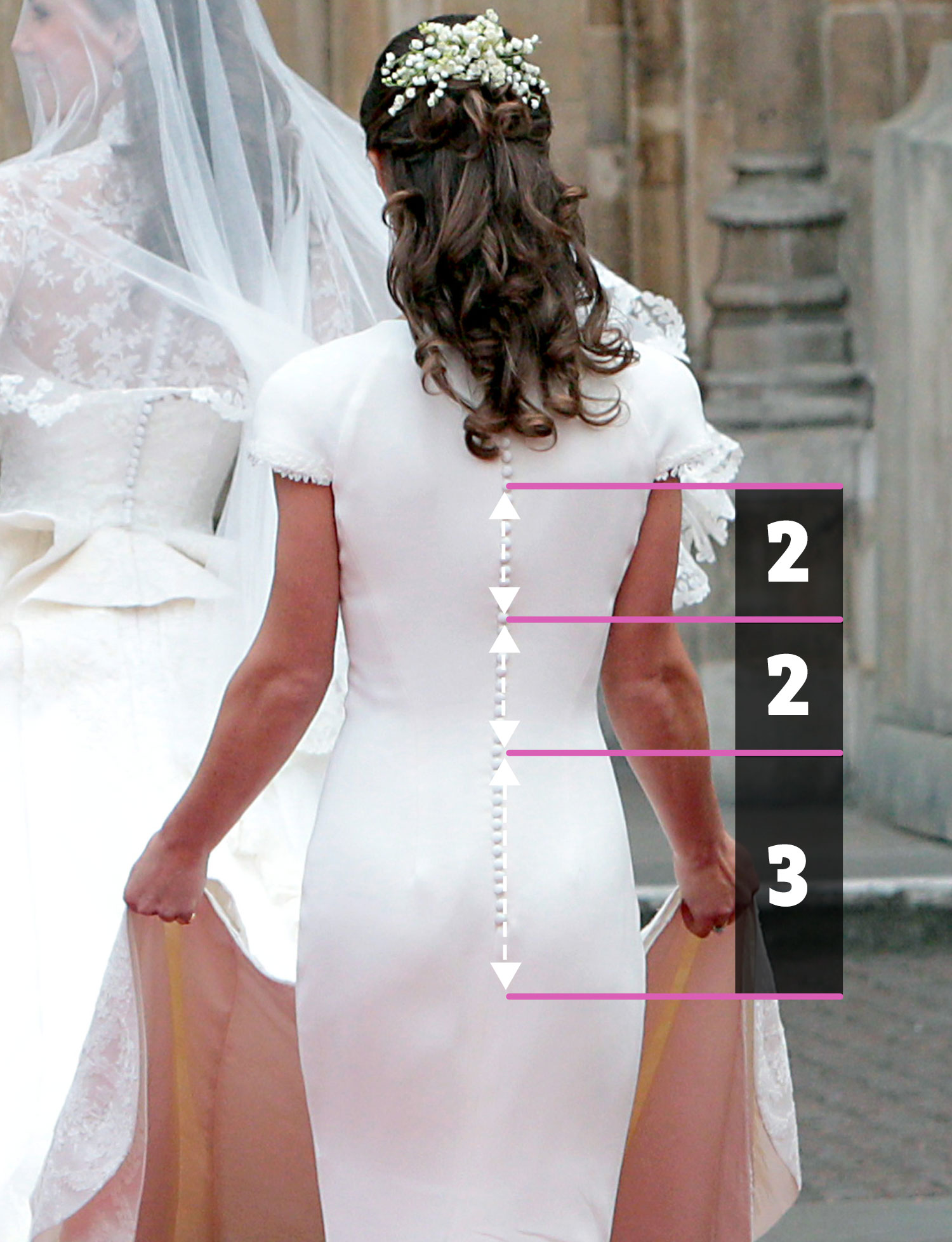 Pippa has enhanced her bum by ‘working hard at the gym’

The Duchess of Cambridge’s sister Pippa Middleton also has a 2:2:3 bum, according to the Golden Ratio formula.

Dr Frati adds: “Pippa famously emerged with the perfect proportion at the wedding of the year in 2017. She has a timeless, youthful and athletic physique. She is a gym bunny and it shows.

“I would say her ratio is 2:2:3, with less volume from the sides/hips and more upper hip projection. She’s definitely enhanced by working hard in the gym!”

For more celebrity stories, the Disney star rich list has been revealed – as Justin Timberlake cashes in a whopping $250m.

And this is what Holly Willoughby, David Beckham, Michelle Keegan & more celebs will look like when they’re old thanks to age filter.

Plus a celeb dentist said ‘perfect imperfect’ teeth are the new ideal – so can you guess the star behind these gnashers?

How boob sizes have changed through the decades