This Morning presenter Alison Hammond couldn’t contain her laughter when Michael Mosley showed her a 300-calorie dinner he had prepared as part of an 800-calorie rapid weight loss programme.

On today’s show, doctor Michael appeared via video chat to offer guidance on how members of the public can lose weight.

Despite previously being criticised for promoting an 800-calorie diet amid his controversial TV programme Lose A Stone In 21 Days, the presenter spoke to Alison and Dermot O’Leary about how he is a ‘fan of rapid weight loss, if you do it properly’.

After claiming that studies have shown that consuming 800 to 1,000 calories a day can be ‘safe and effective’, Michael showed three meals to the camera – eggs for breakfast, a bean and tomato soup for lunch and then, what he described as his ‘pièce de résistance’, a tray of baked vegetables and fish for dinner, which he said was only 300 calories.

Alison was visibly befuddled by the display, bursting into laughter when Michael brought out the third dish.

‘I’m so excited to come round to yours Dr Mosley, can’t wait,’ she said sarcastically, as Dermot also chuckled on camera. 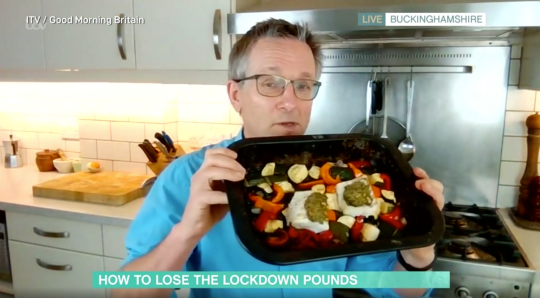 Michael Mosley presents what he has dubbed his ‘pièce de résistance’ (Picture: ITV) 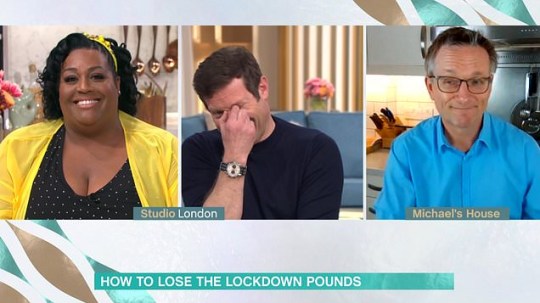 Alison and Dermot were in fits of giggles over the miniscule meal (Picture: ITV)

Several This Morning viewers criticised the 800-calorie diet being promoted by Michael, with some people saying it is ‘dangerous’, ‘damaging’ and ‘irresponsible’.

‘Literally hate what I’m seeing right now on This Morning!!! I eat 1750 calories a day to lose weight!!! Dangerous advice put on tv by a doctor. Definitely reporting this to ofcom! Inappropriate!’ one person said.

‘Beyond appalled that #ThisMorning are conveying a message that eating 800 calories a day is ok, a toddler needs more than that! An extremely damaging message,’ another commented.

Someone else tweeted: ‘I’m completely shocked that #thismorning even featured that segment – so damaging for the people aiming to lose lockdown weight and this goon preaching a completely unsustainable lifestyle by eating 800-1k cals a day.’

‘800 calories a day!!!! This is a joke. Really irresponsible & damaging to promote such extreme weight loss. Do better #thismorning,’ another remarked.

Amongst the ârapid weight lossâ 800 calorie starvation shambles, was âwearing a tight pair of trousersâ which âtells you when youâre starting to put the weight back on againâ really just suggested on #thismorning ? Damaging, disgusting and downright dangerous

#ThisMorning Well I will get my handful of nuts, my glass of water and my tight pants and i’m sorted. That is so damaging. I’m underweight and look at both sides to try to find an even balance. Eat healthy, tasty food, don’t overthink it. No need to starve to lose weight

800 calories a day!!!! This is a joke. Really irresponsible & damaging to promote such extreme weight loss. Do better #thismorning

Michael previously faced heavy criticism for Channel 4 show Lose A Stone in 21 Days, which saw people whose BMIs had been categorised as overweight and obese take part in an 800-calorie daily diet.

Ahead of the show, eating disorder charity Beat shared a post on social media which read: ‘If you’re living with an eating disorder, we recommend that you do not watch #loseastonein21days. Our services will be open until 11pm tonight, so if you’re affected by the programme, please chat to us on our website or DM us here!’

At the time, a spokesperson for the broadcaster told Metro.co.uk in a statement: ‘The series examines the evidenced link between Covid-19 and the very real threat it poses to those who have a BMI in the obese or overweight categories, as highlighted by a recent study led by Liverpool University and involving Imperial College London that found obese people are around 37 per cent more likely to die if they catch Covid-19.

‘All episodes clearly state that a short-term 800-1000 calorie diet is only suitable for people whose BMI puts them in the overweight or obese categories and that it should be done with proper medical supervision.

‘The health and welfare of each contributor is of paramount importance to both Channel 4 and the production company and strict guidelines were followed before, during and after filming.

‘A number of health checks were undertaken on contributors before they embarked on the regime and support is ongoing. The continuity announcer directed viewers to programme support information after the broadcast.’

Metro.co.uk has contacted ITV and Michael Mosley’s representative for comment.