Oh my god, we’re totally bugging! Alicia Silverstone made her TikTok debut with the perfect tribute to Clueless — and a little help from her son.

The Baby-Sitters Club star, 44, posted her first video to the social media app on Friday, June 4. Over a soundtrack of No Doubt’s “Just a Girl” and an audio clip from the movie, Silverstone walked forward in a yellow plaid jacket reminiscent of her character Cher’s iconic look.

♬ Ugh… As if – Alicia Silverstone

“Ugh! As if … I wouldn’t join TikTok,” she captioned the post, adding, “😉💛😘 #Clueless #AsIf.” Her 10-year-old son, Bear, also made a cameo, putting his arm around his mom as she mimed the line, “Ew, get off of me!” After an obligatory “as if” lip sync, the pair made up with a sweet hug.

Commenters immediately went wild for the video, writing things like, “I wasn’t ready for this.” Another viewer added, “My life is complete now,” while someone else asked if her former costar Paul Rudd might be up for an appearance.

“Before Clueless, I didn’t have any interest or understanding about fashion,” the California native told Vogue in 2020, in an interview discussing the 64 costumes that she wore in the movie. “The clothes are the star of the film — or at least the costar!”

Aside from giving fans tons of quotable lines, the 1995 comedy was also known for its many memorable fashion moments, including the yellow skirt suit, which Silverstone said almost didn’t make it into the movie.

“There were three options for this opening scene: a blue version, a red version, and a yellow version,” she recalled. “[Director] Amy [Heckerling] and [costume designer] Mona [May] chose the yellow one because they felt it was the most appropriate for the scene.” 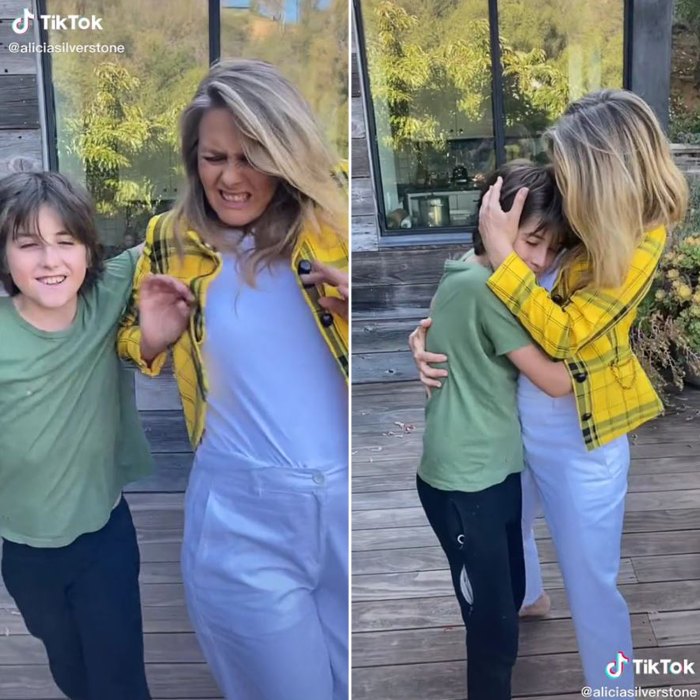 They were right, because the outfit has become a perennial Halloween costume favorite as well as the first thing fans see in their minds when they think of Cher Horowitz.

During an interview about the movie’s 25th anniversary last year, Silverstone said she doesn’t think a reboot or sequel is in the cards. Her son, however, has other ideas.

“One night we were laying in bed and he wrote Clueless Part 2 and what/where Cher would be,” she told Entertainment Tonight. “It was unbelievable what he thought. She was an alcoholic but he didn’t say those words. He was like, ‘She drinks a lot and maybe she’s a makeup artist? Like a professional makeup artist.’”