Adam Sandler’s latest movie is one of the best of his career, at least according to fans, critics and review aggregator site Rotten Tomatoes.

Hustle, the latest feature starring Sandler, 55, to debut on Netflix, sees him star as Stanley Sugerman, a scout for basketball team the Philadelphia 76ers.

Co-produced by basketball legend LeBron James, Hustle follows the story of Sugerman as he prepares a talented young player for the big leagues.

And critics and fans alike are showering the sports film with praise, with specific attention being paid to the ‘everyman charm’ in Sandler’s performance.

Hustle is currently ‘Certified Fresh’ on Rotten Tomatoes, with a critic score of 91%, the third-highest of Sandler’s entire career.

But it’s the audience score, currently sitting at 92% – Sandler’s highest-ever score – that shows just how much of a hit the film is, with viewers sharing their delight in their droves.

Peter Travers, of ABC News, described the film as a sports movie with ‘force’ and ‘feeling’ and a ‘love’ for basketball.

He compared Sandler’s performance to his work in Paul Thomas Anderson’s 2002 film Punch-Drunk Love and the Safdie Brothers’ Uncut Gems from 2019.

Justin Chang of the Los Angeles Times remarked that Sandler has ‘seldom worked harder, or more winningly’, for an audience’s pleasure.

One fan on Twitter argued that Hustle was ‘the best film Sandler has done lately’, while another described it as an ‘electric film for basketball fans’. 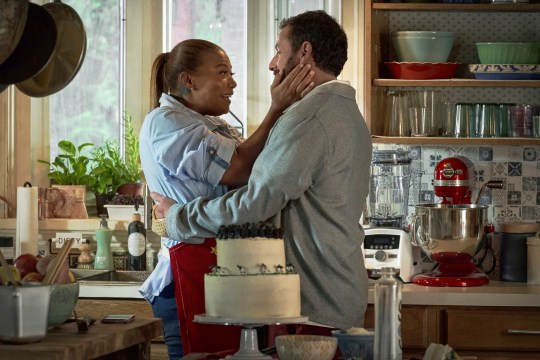 Sandler stars in the film alongside Queen Latifah, who plays his wife Teresa (Picture: Netflix)

The movie also stars actress and musician Queen Latifah alongside Sandler, as well as professional basketballer Juancho Hernangómez, who plays for Utah Jazz, and Hollywood veteran Robert Duvall as Rex Merrick, the father of Vince (played by Ben Foster).

The movie hasn’t pleased everyone, with some critics accusing it of recycling sports film clichés, but the hugely positive reaction marks a shift in the coverage of Sandler’s films.

His career has been littered with comedies that have received a poor – and occasionally frustrated – response from audiences and critics alike.

Comedy western The Ridiculous 6, also released on Netflix in 2015, was panned by critics, and is one of only a handful of films to receive the dreaded 0% score on Rotten Tomatoes.

That was in addition to the 11% rating received by 2012 comedy Jack & Jill, in which Sandler plays both titular characters, and the overwhelmingly negative response to the Grown Ups film series.