Mimimi’s stealth tactics game Shadow Tactics: Blades Of The Shogun was released in 2016 and allowed players to take control of a team of assassins in early Edo-period Japan. Now, five years later, a standalone expansion has arrived to give fans a chance to sink their teeth into a few more missions.

Aiko’s Choice picks up where the main game left off but offers a catch-up video to ensure those who didn’t play the original still know what is going on. There is little mechanical difference between Aiko’s Choice and the base game. The expandalone’s significant change is that the main character is Aiko this time. Instead of a revolutionary sequel, you get a few extra levels similar to the larger maps from the main game. It’s more of the same, but that’s a good thing. Overall the expansion takes about six to eight hours to complete and is a nice slice of what Shadow Tactics is known for.

However, Aiko’s Choice expects you to have some knowledge of the game’s mechanics as it throws you into a standoff with gunmen while providing no explanation of how to prepare attacks, use abilities, or switch characters. Rusty returning players and those jumping in brand new will have an awkward few deaths as they work out how to attack enemies, which ability works best, and even how to queue them.

Aiko’s Choice attempts to give tutorials, but they generally appear too late after being deduced through trial and error. The lack of valuable tutorials isn’t the end of the world, as trial and error is the best part of Shadow Tactics. Testing a plan and finding it fails can be slow, and any mistake is punished harshly. 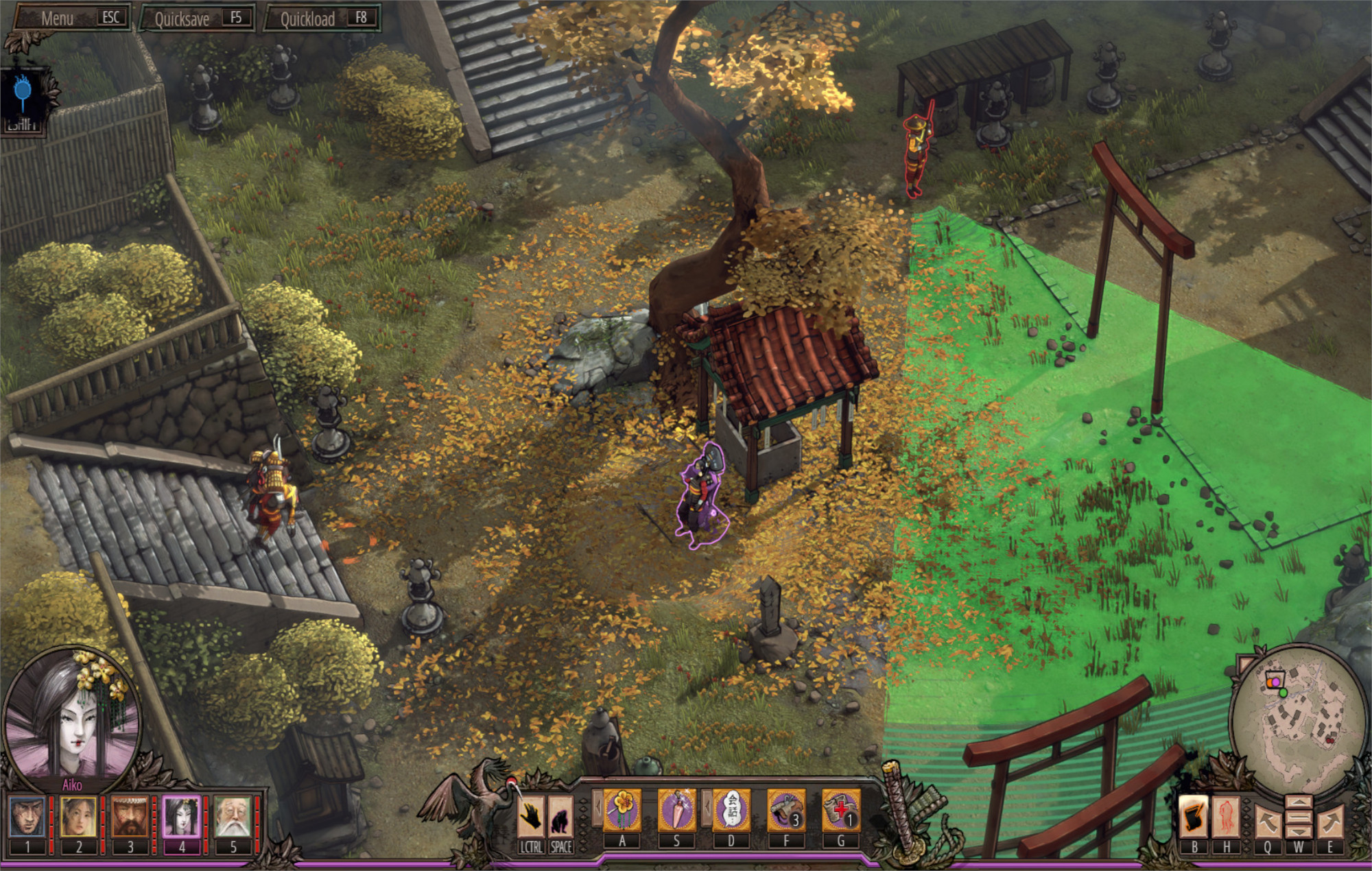 As with the original, expect quick saving and quick loading frequently. If any team member is spotted, you’ll only have a brief window to solve the situation. If things go too wrong for more than a second, chances are you’ll need to restart. Hordes of guards will pour into the area on high alert and successfully managing a team of people in real-time open combat is impossible. If anyone dies, it’s back to your last save anyway, so save some time and quick load often.

What is as satisfying as ever is the slow unpicking of an area. Your goal might be to get across a bridge watched by guards. There’s a potential string of murders that could get you a clean crossing, but those guards are visible to the soldiers in the courtyard nearby. Each goal needs to be achieved in the same way you untangle the cables behind the tv. Find a point of weakness and begin to piece it apart from there. 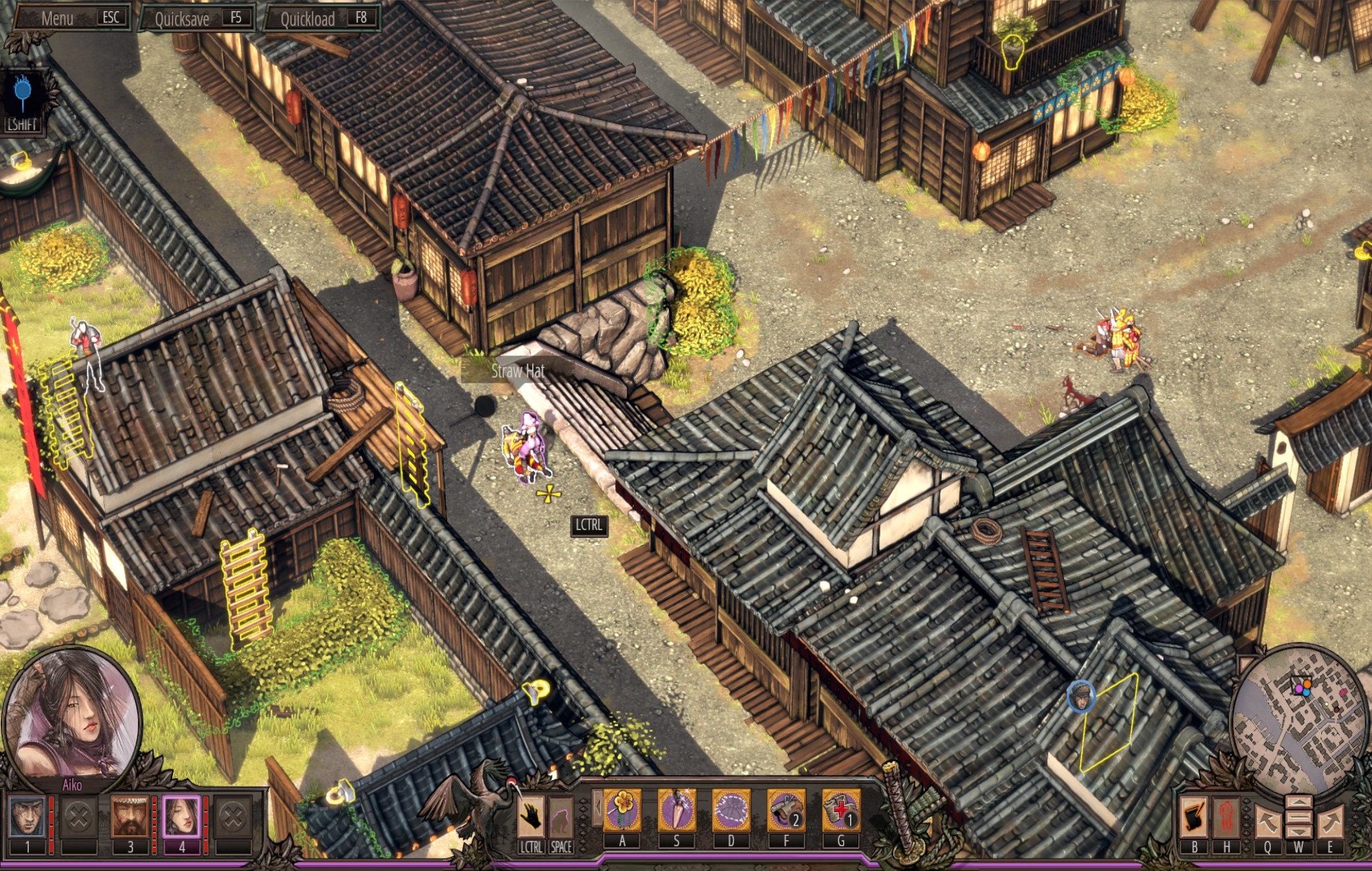 Each of your assassins has different skills and different behaviours that provide you with other options. Getting Aiko to distract a guard will allow Mugen to sneak up for an instant triple kill, but as soon as he strikes, a guard nearby will notice, so Hayato needs to be ready for a speedy shuriken throw. Pulling off these types of precise combination takedowns are the most enjoyable part of the game because you have worked for them. You have manoeuvred each piece into position and prepared the different elements, and when you say go, it is over in a moment. It’s a far more enjoyable expression of stealth than the all too common “press F to stealth kill the man who walked over to a ledge and looked away for a deliberate amount of time”.

The biggest downside is still the same caveat of the original Shadow Tactics, though it has a different name in Aiko’s Choice. Players can use Shadow Mode to prepare actions and execute them simultaneously. This is extremely useful when you want to have all of your assassins strike as one. You can also have something ready for more reactionary use. You can set up a shuriken in shadow mode if that guard comes round the corner at the wrong moment. However, Shadow Mode can only be used to queue up one action per character, and there is no pause mode in Aiko’s Choice. This often leads to an exciting six-person takedown ending with all your characters standing in the open surrounded by corpses. Tidying up in real-time is tedious and is a deliberate choice from the developers to ensure you have no room for mistakes.

While I can respect the balance needs of Shadow Mode in the story mode, I would have liked to see an option for uncapped action queues. Maybe I am spoiled by Door Kickers 2: Action Squad, but being able to plan every move in advance and then watch the situation unfold out of your hands, even in more minor skirmishes, is always fun.

Shadow Tactics’ beautiful hand-drawn and watercolour style returns, and each location is pleasant to explore. The many vibrant landscapes are fascinating but do come with a lack of clarity when it comes to playable space. This is most noticeable on rooftops where certain areas look easily accessible but actually aren’t. Problems like these are incredibly annoying when you’ve carefully manoeuvred a character to a perfect position, only to find you can’t actually stand there.

While the in-mission dialogue between your characters is rare, it is always a welcome treat. The levels are significant, and often it can feel like you aren’t working towards your goal. However, your band of assassins talking like the old friends helps keep you on track, and their interactions are always enjoyable. The overall plot focuses on Aiko and her past, but the whole team is in on it together. The extra depth to the characters and progression of their story highlights why this expansion deserves to exist.

Shadow Tactics: Blades Of The Shogun – Aiko’s Choice is out on December 6 for PC. We reviewed it on PC. Obviously.

A valid excuse to return to the beautiful world of Shadow Tactics while providing fresh challenges in vast maps, Aiko’s Choice is an expansion that doesn’t change much from the original but offers a new story and a shorter playtime for those trying Shadow Tactics for the first time. Each level continues to be a satisfying puzzle box to strip apart and overcome.