10 Chambers’ first-person shooter horror hybrid GTFO has finally been released from early access with little fanfare but a lot of changes. GTFO is a four-player co-op game that has your team (with bots filling any spare slots if you don’t have four mates) carefully picking their way through an underground facility to complete objectives for a mysterious warden, and it’s hard as nails.

Each run starts with a literal express elevator to hell as you’re dragged into the dark and dropped into the facility. Missions are time-locked and available at different times, which developers 10 Chambers say will make the community work together on each objective and foster a sense of togetherness. Many of the team working on GTFO are Payday 2 veterans and it seems like a conscious decision to avoid the 9999 different missions that populate that game.

Nonetheless, each of the different missions takes place in a different place: You could be exploring an industrial storage facility, or a laboratory, or even a location full of jeeps and concrete cladding that appears to be a visitor centre for this deep dark hell.  visitor facing design. Exploring each of these zones is never comfortable. Darkness is particularly pervasive, and in GTFO, darkness can effectively conceal run-ending dangers. You’re often told of a target in the gloom thanks to a teammate’s bio-tracker – the Aliens motion tracker in all but name. The bright flashlights alert enemies, so instead you throw a glowstick in the direction indicated and reveal three sleepers resting in the shadows. Sleepers are mutated humanoids that are dormant but introduce too much light, motion, or noise, and they will kick right off. Carefully approaching and hitting sleepers to avoid detection sometimes requires coordination between multiple players and when it works that release of tension is palpable, but it only lasts a few seconds before there’s something else to deal with.

The oppressive gloom of these long-buried interiors is occasionally interrupted by story-related moments of juxtaposition. Something new since I played GTFO in early access is the items at the end of missions that gives insight into the facilities you’re exploring, before everything went wrong. Grabbing the first item suddenly and seamlessly teleports you and the other players to a sunny, open desert that really rams home how dark and claustrophobic each of the levels are. They are surprising, delightful, and often more than just a pretty interlude. 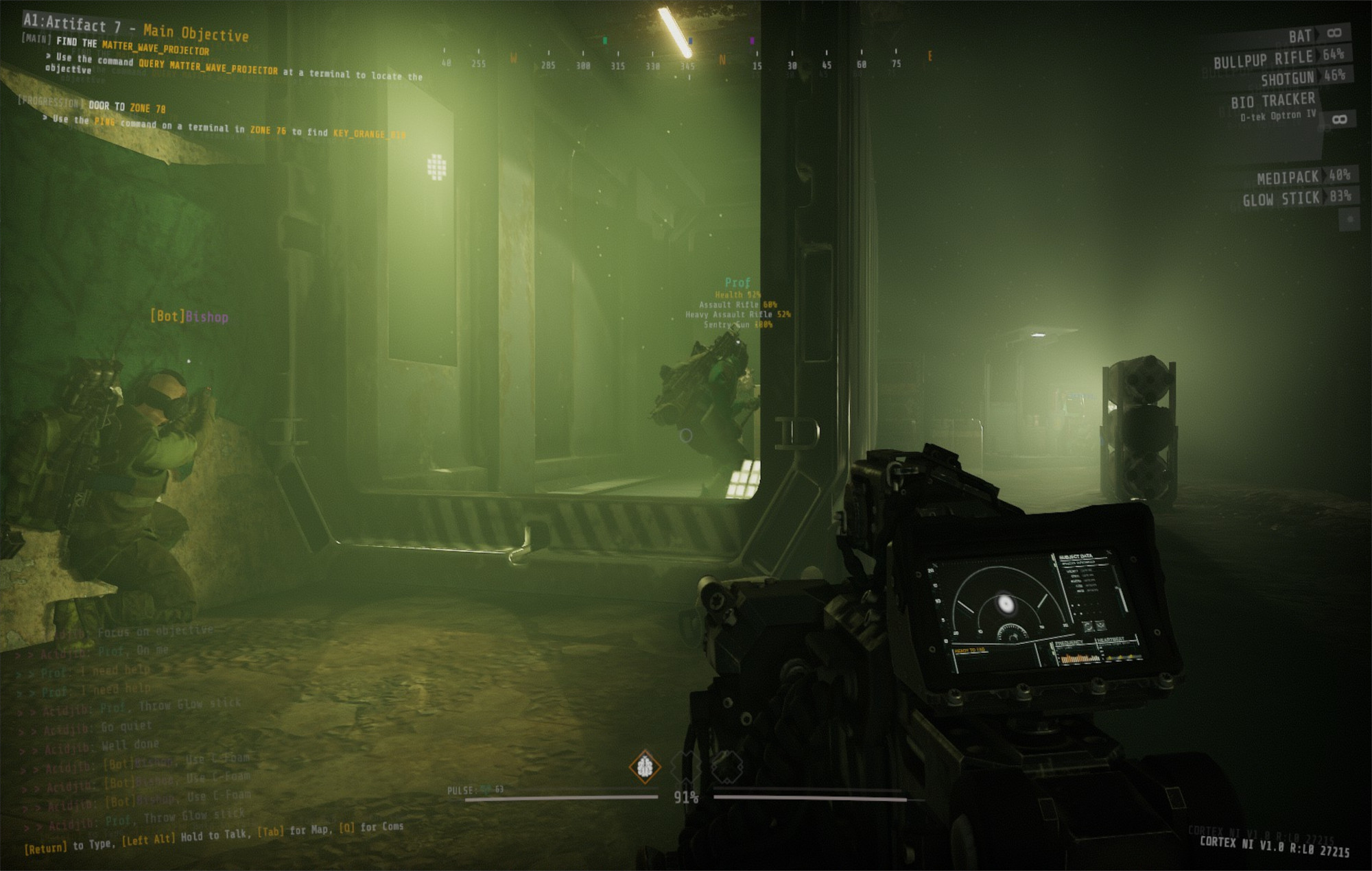 While being detected is rarely dangerous because of the enemies, it forces you to use your precious ammunition. It’s the response to every one of the game’s insistent monsters, and if you run out you’ll quickly die. It’s a shame you’ll be trying to conserve ammo, because ripping rounds out of any of GTFO’s weapons is incredibly satisfying: the sound design has a futuristic twist on relatively conventional weapons, meaning that while the the carbine is basically any assault rifle in use today its energetic sound design brings a crackle of sci-fi to every meaty burst. Shotguns are unmistakable beasts that roar with every shot, and the machine gun hums as it charges before ripping apart anything unfortunate enough to be in your sights.

In general, each run will be spent creeping around dark rooms with mistakes and security doors to punctuate the quiet. Security doors are often between you and your objective and have varying degrees of alarms to contend with. Any alarmed door will summon bad guys to your position, and they need to be kept at bay while you play king of the hill and get into certain circles to deactivate the alarm. Thankfully you are often pre-warned of the alarm and can set up to defend. C-foam launchers and grenades can reinforce doors and create sticky traps, while players can use the mine deployer to lock down chokepoints, and sentry guns can whittle down the enemies before they reach you. While all of these deployable are useful, they can also be hazardous to you. The game has full friendly fire, which applies to mines and sentry guns. Some of the most devastating damage we received came from a friendly sentry gun that wasn’t smart enough to avoid trying to shoot through us. While players can’t set off trip mines, they can be ruined by the splash damage if an enemy passes through the laser. Security doors are often the point of defeat in a run, and carefully planning and executing your defence is critical to survival. 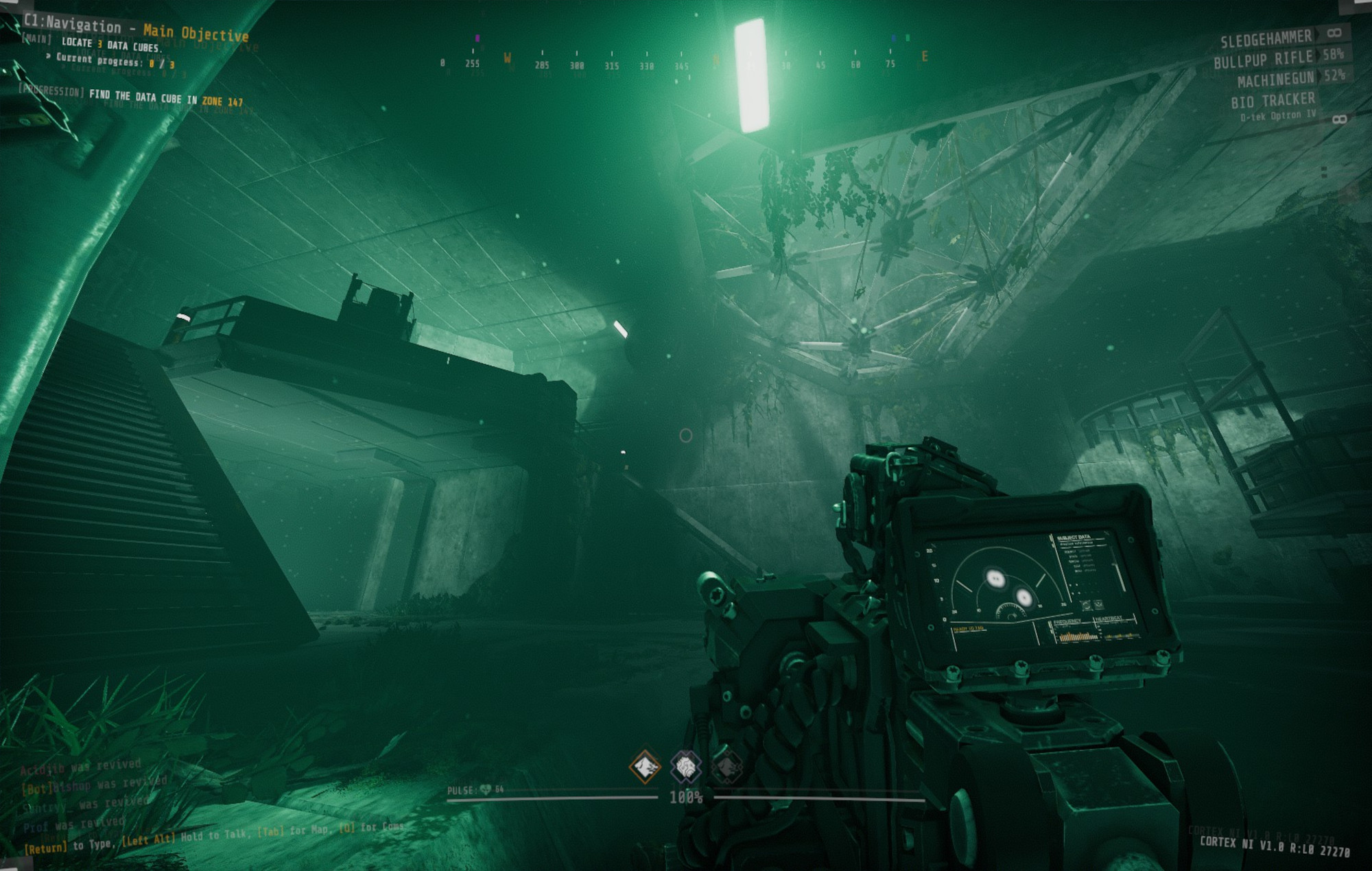 While the game is punishing, it is rarely enemy damage that will end a run but instead death of 1000 cuts as you start running out of resources. Several zones can contain lockers with supplies throughout each location, but there is rarely as much as you’d like. Each player can carry one deployable item such as glowsticks or fog repellers and one consumable like a Medicpack or Disinfectant. Each of these consumables has a painfully limited number of uses, and choosing who gets ammo, who gets health, and when is the most impactful part of any run. While well stocked on ammo and health, it’s hard to see a fight that won’t go the player’s way, but with the scarcity of those resources, nearly every shot is important.

One of our most nail-biting runs involved fog that increased our infection if we spent too long in it. Infection is a separate stat that increases when certain syringes are used or from the special fog and will reduce your maximum health by the amount of infection you have. Carefully deploying fog repellers allowed us the get through most of the zone without trouble, but we ran out of those due to poor coordination and found ourselves needing to “get the fuck out” of there. Health wasn’t our problem, we had too many medikits, but our infection was too high to use them. We limped towards the next area with minimal health and ammo before being easily overwhelmed at a security door. The next run, we used our repellers more deliberately and always had disinfectant on us. It went better, but it was still a pinch point.

To assist with finding resources is the very cool terminal system. Some terminals can be used throughout levels to put in simplistic lines of code. They can provide lists of items in a zone, querying an object to locate it and pinging it if it’s close enough to show it on the hud. The terminals allow for resources to be hunted down when needed and scout ahead to find out what will be available further. However, they also show up as essential parts of level objectives. One round we played asked us to open a door that would trigger an alarm, and that alarm would not stop until deactivated at a specific terminal. We barged headlong through continuous waves of angry monsters until we reached the terminal, where I had to quickly work out what the correct command was and slam it into the command line to stop the deadly alarm. It was great and is one of the most exciting uses of a terminal that I have seen in any game. 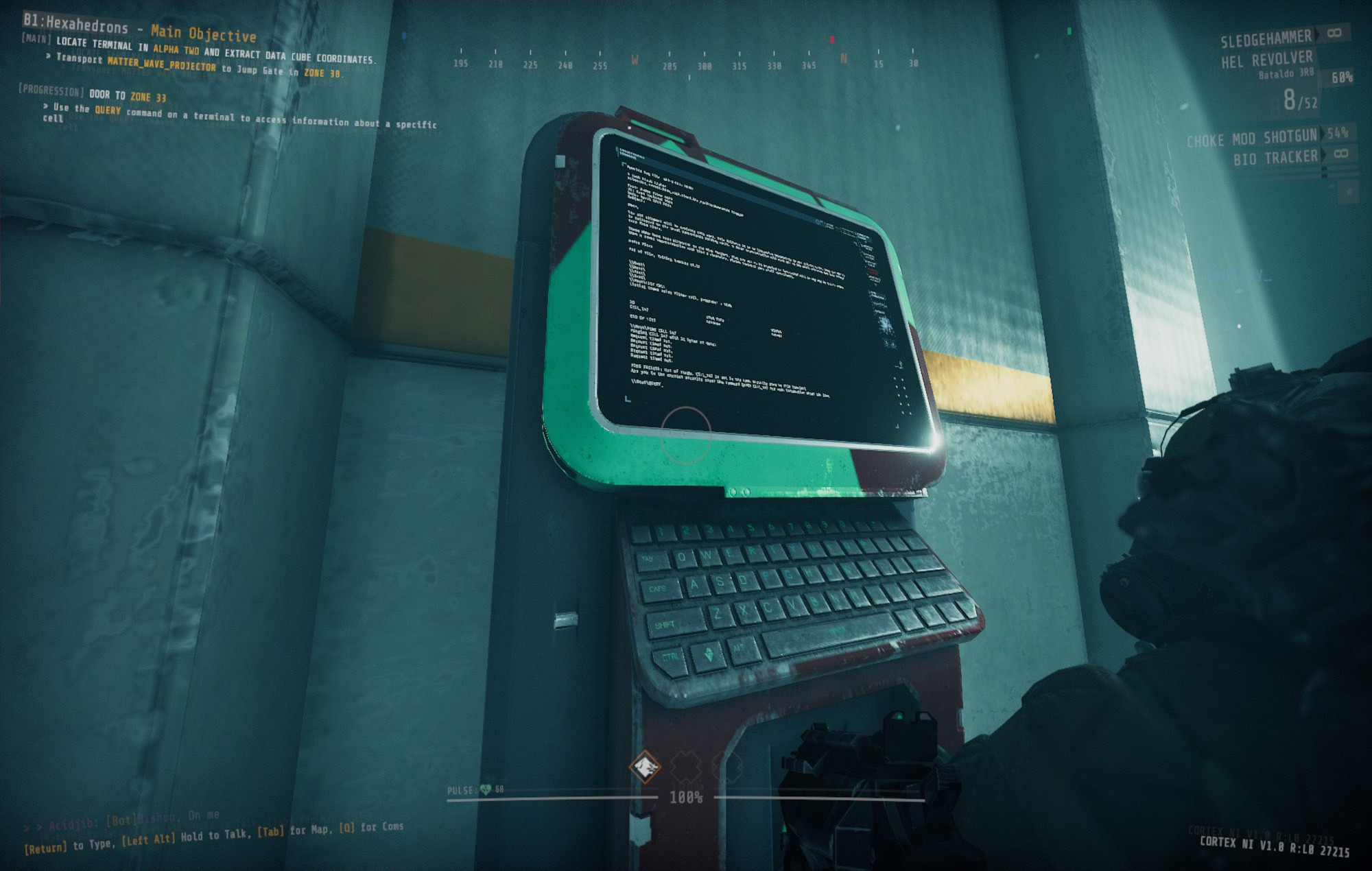 Some levels also include optional side routes that make each level more difficult. These are locked behind doors called bulkheads that require their keys to open for those interested in even more of a challenge. While the levels are generally linear and learnable, the bulkheads offer a reason to head back into a cleared level and face a new challenge.

With GTFO’s release, it has also introduced boosters. These small boosts to stats can be enabled in the loadout screen, and collecting them in-mission ensures you have a constant supply of buffs to deploy. While they are limited use, there is no reason not to use them, but saving your most potent upgrades for bulkhead runs is probably wise.

Finally, GTFO has included a cosmetic system that allows you to gradually unlock new masks, colours, and clothing for your prisoner. One of these items is unlocked whenever you complete a run and is randomly pulled from a pool of options. There’s no way to see what you can unlock, so working towards something specific is impossible. These items are interesting, but there’s often little distinctive about them worth pursuing. There is no actual character customisation in GTFO, so hopefully, you are happy playing one of the four bald dudes each run.

GTFO has launched on Steam, and is available to play on PC.

GTFO is a solid and challenging shooter with great sound and environment design. The terminal is a delight to use, and the optional bulkheads provide a reason to come back. However, the core gameplay loop can get a little repetitive and the different environments and loadouts don’t do enough to combat this.