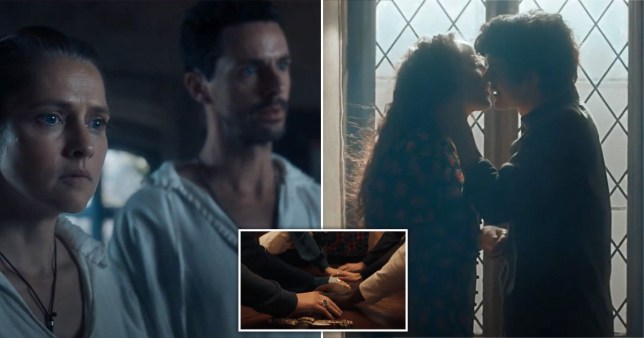 Fans were treated to a season 3 teaser after season 2 finale (Picture: YouTube/ SkyTV)

A teaser has been released for the upcoming third season of A Discovery of Witches, hinting that a ‘revolution’ is coming as Diana Bishop (Teresa Palmer) and Matthew Clairmont (Matthew Goode) prepare to fight.

On Friday March 12, the season two finale of the fantasy series, based on the All Souls Trilogy by Deborah Harkness, aired on Sky One.

Fans of the show were full of praise following its epic conclusion, with one Twitter user writing: ‘Thank you so much! The season was everything we could’ve hoped for and more!!’

But they were in for an even bigger surprise when moments after the finale, a teaser was released for series three, which has been given a 2022 launch date.

The sneak peek begins with a close-up of two people holding hands, as a voiceover ominously warns: ‘The de Clermonts’ day is nearly over.’

‘This is a war that we cannot win,’ another voice says, before someone else states: ‘If they take on one of us, they take us all on,’ as a group of individuals are shown placing their hands on top of a knife.

Flashes of scenes from the show appear one after the other, before one final statement is made about what is to come.

‘We need more than a fight. We need a revolution,’ the voiceover affirms, as the camera closes in on witch Diana and vampire Matthew.

A Discovery of Witches fans were brimming with excitement over the teaser, with one person tweeting: ‘Oh my giddy aunt, I can’t copeeeeee.’

Several fans lamented the fact they have to wait another year before they meet the characters again.

‘Shall we just hibernate until then yeah?’ one Twitter user suggested to a friend.

Season three of A Discovery of Witches will see several newcomers join the cast, including Olivier Huband as Fernando, Parker Sawyers as Ransome and Genesis Lynea as Geraldine.

Meanwhile, Peter McDonald is set to take over the role of Baldwin from Trystan Gravelle , after the actor had to leave the show due to scheduling conflicts.

‘I’m delighted to be taking the role of Baldwin de Clermont into season three of A Discovery of Witches,’ Peter said.

‘Relishing the opportunity to tell this story with all the cast and crew at Bad Wolf Productions.’

All episodes of A Discovery of Witches seasons one and two are available to watch on Sky and NOW TV, with season three set to return next year.