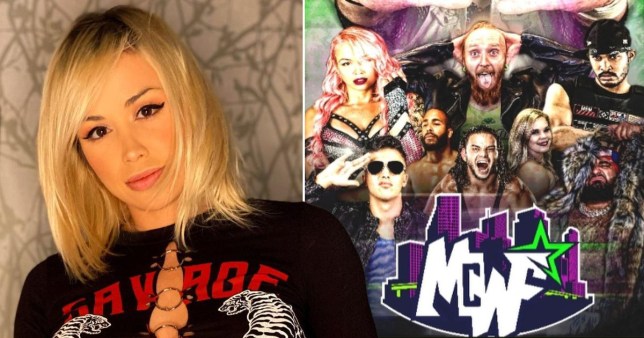 Paola is poised to take over the wrestling world (Pictures: Paola Mayfield/Instagram)

90 Day Fiancé star Paola Mayfield is set to get in the ring for her first ever wrestling match next month.

The 33-year-old reality star – who appeared on the first series of the US show back in 2014 – is now going under the stage name Paola Blaze, and she’s primed for her debut.

Paola – who seems excited for her big moment – shared a glimpse of her wrestling skills in a recent video, and revealed she’s been ‘waiting for this moment for so long’.

In a lengthy Instagram post, she wrote: ‘The Moment is here… Meet Paola Blaze , your new favorite wrestler. I’ve been waiting for this moment for so long!

‘I can’t believe in a couple of days, on May 1st, I will be making my debut as a wrestler. I can finally show all my hard work and dedication! You never know what you want in life until you try many things, and I’m glad I did!

‘I have fun, I make money, and I make people angry I’ve done so many things in my life that I’m very proud of and others not so much, but here I am from being a shoe designer in Colombia to modeling and acting to a very controversial TV personality, a personal trainer, nutrition coach, Zumba instructor and now a wrestler.’

The star noted she’s been busy putting in the work ‘quietly’ behind the scenes, and she seemed to insist she’s a natural in the squared circle.

She continued: ‘I’ve been training since last year, very hard and quietly. Wrestling requires so many skills that I didn’t know I have but damn I’m very good at them!

‘I love it, it makes me feel alive and powerful! I wish I new wrestling before but now it is my time to show you what this Latina is made of! I’m bringing the fire! (sic)’

Celebrities trying their hand at wrestling is nothing new, with Bad Bunny delighting fans last weekend at WrestleMania 37 with his top-level performance alongside tag team partner Damian Priest against The Miz and John Morrison.

And in the UK, former Love Island star Adam Maxted has continued to make waves on the independent scene, while Geordie Shore’s Aaron Chalmers has made it clear he wants to work for WWE one day.

Just last summer, he exclusively told Metro.co.uk: ‘I’m hoping my agent can thrash out a deal as soon as possible, and when everything opens back up hopefully we’ll be ready to go.

‘For a kid who used to watch it religiously to eventually step through the ropes, would be like a bit of a dream come true.’