Rock The Spacebar is a twice-monthly column investigating the great music that underpins your favourite games. This week, Dom Peppiatt takes a break from adding Hotline Miami tracks to their new playlists to examine why – some 10 years later – the psychedelic electronica of Dennaton Games’ breakout hit remains so present, so listenable, and so perfect as an accompaniment to Hotline Miami’s timeless commentary on violence.

Bust down a door. Crack a man’s head open with a baseball bat. Pistolwhip some hired goon rushing at you from the stairs. Roll. Kick. Dodge. Take a crowbar to the face, shoot your pistol in a panic, kill the mob boss. That’s it, you’re done here. Make your way back to the front door – take one last look at the neon, the tacky Miami-inspired prints on the walls, the tiger-skin rugs – and head back to that car that looks suspiciously like DeLorean DMC-12 you parked out front earlier.

“Do you like hurting other people?” Hotline Miami asks you, minutes into the whole experience. It’s intentional. You must bloody love violence, right, if you’re playing this game? The whole experience – all five brutal hours of it – is a commentary on violence, its portrayal in the media, and our collective relationship with it. Like A Clockwork Orange or American Psycho before it, Hotline Miami makes you question where the line between fiction and reality blurs; makes you question the integrity of sanity in a world that increasingly rewards instant gratification. It makes you think about games, as a medium, and the bloody indulgence that’s been integral to the medium for half a century. And it makes you think, most alarmingly, about yourself.

In Hotline Miami, you’re a cocaine-fuelled spectre of decades gone by, with nothing in your life except fast cars, fast food, and fast-paced frenzies in other people’s homes. You’re an 80’s action movie legend come to life. And it’s miserable. Your only respite is the calm and quiet sanctuary of convenience stores, of pizza parlours and your apartment, the only places you visit outside of the relentless parade of savage violence. Except for the dream sequences.

During these introspective intermissions – in which you’re quizzed about your mental health, your attachment to reality, and your taste for smashing out white-suited  blood across all sorts of premium real estate – Hotline Miami’s otherwise intense, testosterone-fuelled music takes a step back.

These moments, they have ‘Smoking Area’ vibes; whether it’s Sun Araw’s ‘Horse Steppin’’ or Jasper Byrne’s ‘Hotline’, Hotline Miami knows exactly when to deploy its exhales to better help you control your breathing. You can’t grit your teeth, grip your PlayStation Vita, and berserker rage for hours at a time – nah; like a good DJ, Hotline Miami gives you equal chance to recover your stamina and hydrate before the drop hits again and you find yourself coming to, hours later, with massive pupils and a smatter of blood on your bomber jacket.

It’s probably M|O|O|N that does the best job of nailing the vibe. As the headline artist of the OST, developer Dennaton Games made sure to mix M|O|O|N in as a throughline – the continuing, insistent force that underpins everything in the game. ‘Paris’, ‘Crystals’, ‘Hydrogen’, and ‘Release’ are the main level soundtracks, and as such feel like they define your nameless protagonist’s cocaine psychosis. They’re as much as a personality for your character, ‘Jacket’, as the synth melodies and Europop bangers are for Ryan Gosling in Drive. And no wonder; Dennaton Games specifically namechecks both Drive and documentary Cocaine Cowboys as inspirations for its ultraviolent ode to 80s Miami.

That’s why M|O|O|N works so well; his intoxicating electronic beats encourage you to commit heinous acts of violence against Miami’s criminal underbelly. Insistent, glitchy, synth-laden, and irrepressibly sinister thanks to the focus on minor chord stings, each main level’s soundtrack – cut with some the dark synthwave of Perturbator and the gritty electro Scattle, for good measure – hypnotises you into the game’s flow. It makes you feel like all the killing is some sort of gruesome ballet, some considered piece of carefully-choreographed arthouse theatre. You’re entranced, and the music was deliberately picked for this very reason. 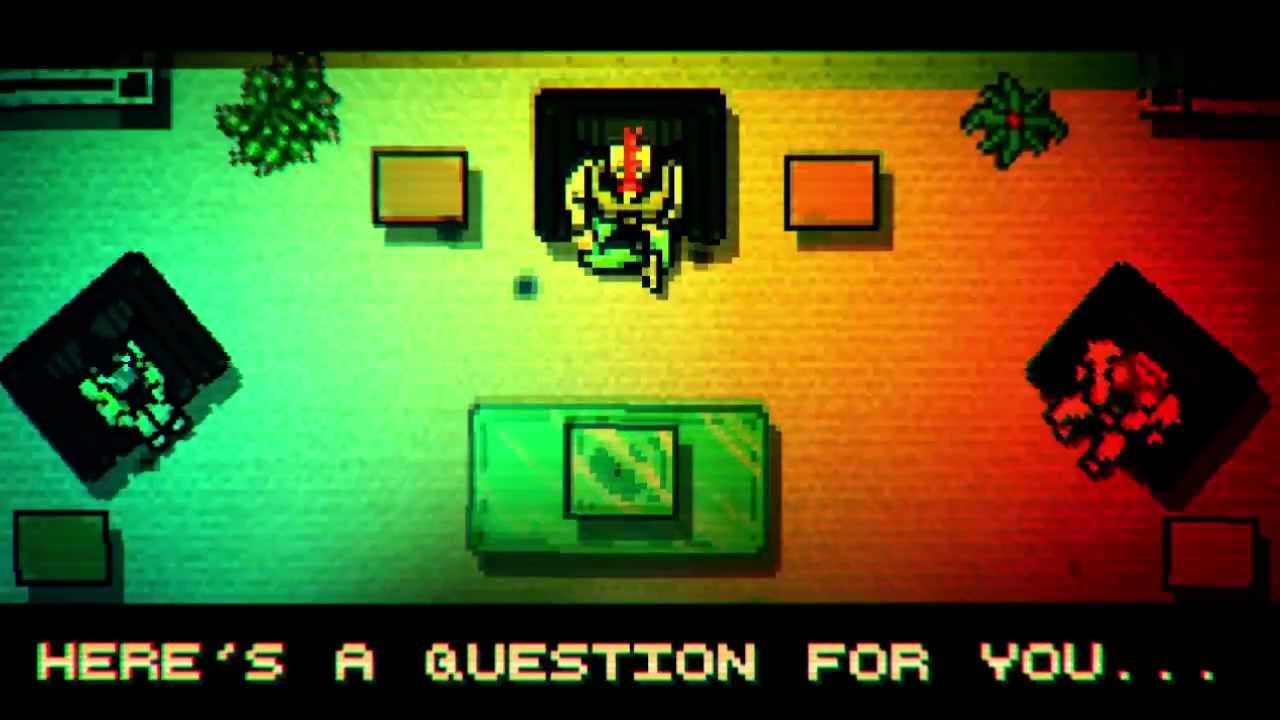 Hotline Miami asks you whether you like violence. A lot. Credit: Devolver Digital

It’s not my place to ruin Hotline Miami’s big reveal here, but the amped-up violent electronic beats that saturate the game’s levels do their job majestically. They’re placed, very cleverly, to give you no time to think about what you’re doing. Like those hours you lose in a club between 2am and 5am, M|O|O|N, Scattle, Perturbator, and Dennaton’s other shifty collaborators keep the pace up, keep you killing in a frenzy, until they decide to open the doors and let that horrible natural light in.

Those Smoking Areas that you’re briefly allowed to take breaks in? They’re still playing music – it’s not quite as intense, but you’ll notice your head bobbing along to it as you take quick drags of Hotline Miami’s vague in-between-sessions narrative. Dennaton Games deploys music with deliberate intent (alongside visuals, interactive systems, and dialogue) to coax you down a path, and keep you doing what it tells you to do. Whether it’s the grim, foreboding ambience of ‘Crush’ again by El Huervo and ‘Silver Lights’ by Coconuts, the insistent beats of the main level tracks, or the meandering drones of Sun Araw that feel like hangovers-in-waiting, Hotline Miami’s soundtrack plays with you as much as the gameplay does – and that’s no mean feat. 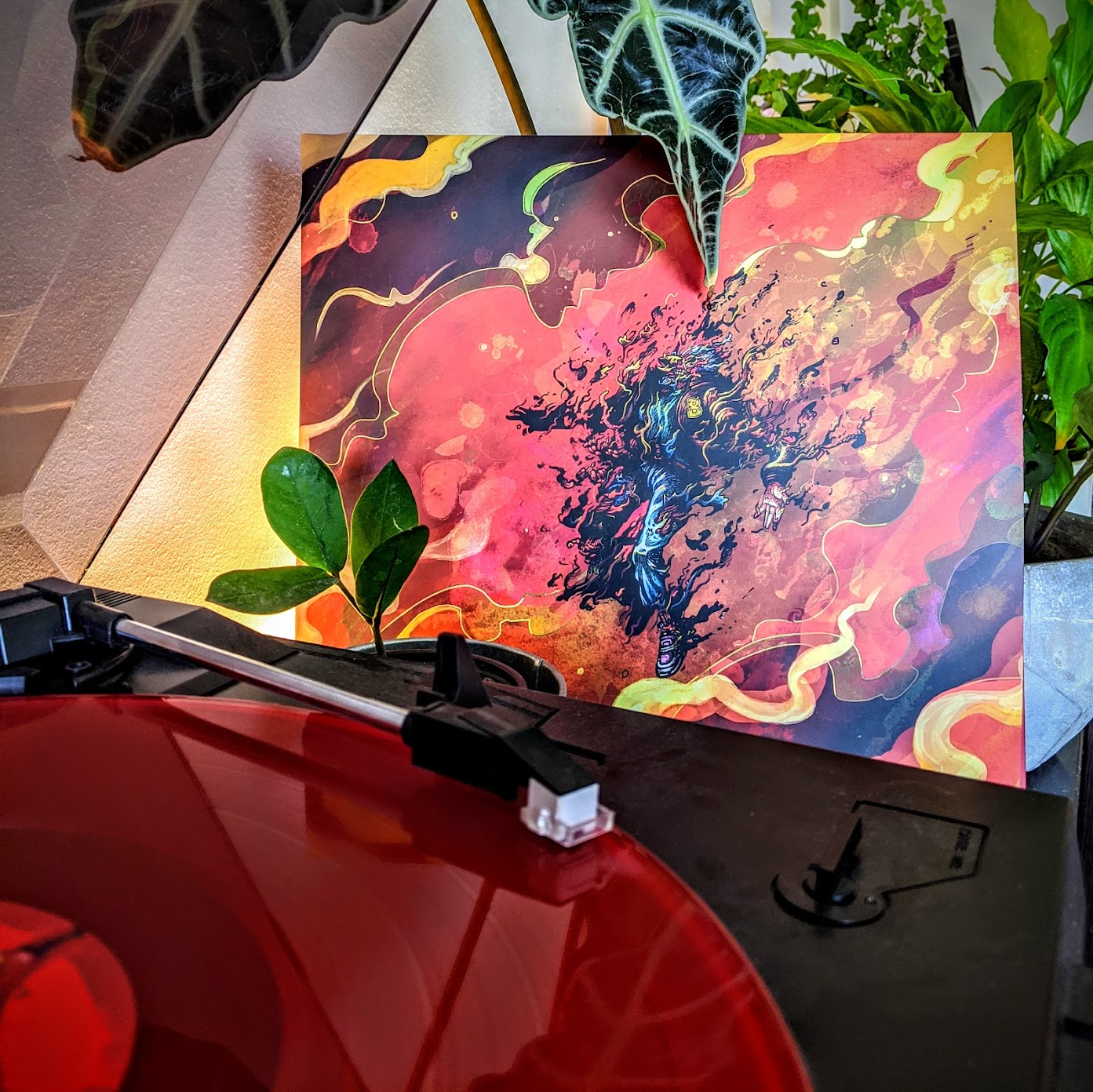 The Hotline Miami soundtrack is so good, it’s worthy of a (quite expensive) vinyl pressing. Credit: Dom Peppiatt

It’s a meta-commentary on agency and video games in general, and Hotline Miami’s central conceit would not – in any way – work without the driving, insistent and convincing sythnwave soundtrack it wears like a well-fitting bomber jacket. It’s telling that, in this game, you’re ranked per level on your style, your adaptability, and your speed. How apt that is – as you’re listening to the soundtrack sting your ears as you finish off some hopeless thug, execution-style, against a brick wall with a snubby shotgun tucked under your arm – that you’re being ranked on these criteria, when the music itself demonstrates each of these qualities in spades.

To this day, after having seen Perturbator, Carpenter Brut, and El Huervo live thanks to my exposure via the series, I cannot listen to one of these artists without thinking to myself – in an alarming detached way – ”do you like hurting other people?” As a commentary on introspective, psychedelic ultraviolence, it doesn’t get better than Hotline Miami.

Hotline Miami initially launched in 2012, and is available to play now via the Hotline Miami Collection on Steam, Nintendo Switch, PlayStation 4 and Xbox One. The OST LP, which the header image art was taken from, is available via Laced Records.