Which ingredients are considered harmful, and what do they do?

Three chemicals are particularly problematic: formaldehyde, dibutyl phthalate (DBP), and toluene. “These make a toxic trio that can have some very negative effects on the nails and the body,” states Stacy Chimento, MD, a dermatologist at Riverchase Dermatology in Miami.

In fact, they have been linked to impacting the nervous system, reproductive issues, birth defects, and increased risk of nasal and lung cancer, Chimento says. DBP is banned in Europe and, along with formaldehyde, is banned in California; but otherwise, all three remain legal in the US.

Nowadays, the large majority of nail polish brands have eradicated this trio, leading to what’s known as ‘three free formulations. But, some are removing other harmful chemicals from their formulations, too: such as camphor, triphenyl phosphate (TPHP), xylene, ethyl tosylamide, formaldehyde resin, sulfates, and parabens. Between them, these are linked to eye, skin, and lung irritation; hormonal and fertility disruption; headaches, nausea, and dizziness; increased cancer risk; and

antibiotic resistance
, to name but a few.

But, notes Hoffman, “it’s important to remember that…if one specific chemical isn’t used in a particular polish, another one likely is” – so check that ingredients list if you’re concerned. “The Environmental Working Group’s Skin Deep database is a good place to start researching,” she suggests.

Do I need to be worried about these chemicals?

Chimento states that chemicals in polishes can be absorbed through both the cuticles and nails themselves, but are just as easily inhaled through their fumes (and we’re all familiar with that distinctive scent).

The main issue is that, while studies show the body does absorb chemicals in nail polishes, research is lacking around whether levels are significant enough to affect us long-term. “The amount you absorb, and whether or not it’s enough to negatively impact health, is not well established,” Hoffman shares. “Many chemicals used in nail polish are metabolized and quickly clear from the body. For example, we assessed exposure to TPHP during nail painting and found that markers of exposure went up after painting and decreased within a day or two.”

Hoffman says that, for those who only use polishes on occasion, their exposure levels are probably low. “But for people who paint their nails regularly, or work in nail salons, polishes may be a more important source of exposure”; especially when combined with amounts in other everyday products (TPHP is also used as a fire retardant in furniture, for example).

While the jury remains out on the real impact of these chemicals, “it is enough of a concern to fuel a move to clean or ‘safer’ nail polish options,” states Chimento. Essentially, “there isn’t a way for this type of product to exist if it is not formulated with chemicals. But there are ways to make formulas safer, and that is what some brands are striving to do.” 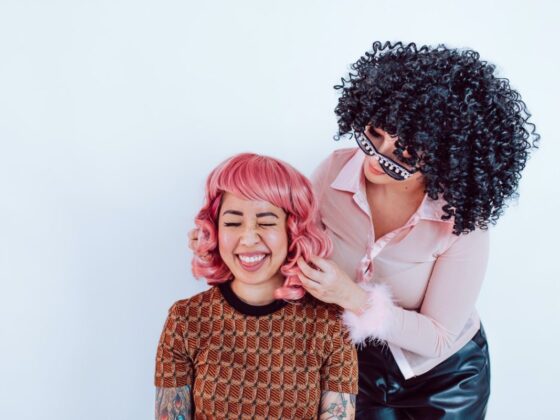 How to take care of scary human hair?