A WOMAN who grew her hair down past her bum over 16 years has been awarded almost £6,000 in compensation after a botched dye job left her with two giant dreadlocks.

Nurse Kimberley Gorton only popped into her local salon for a semi-permanent colour to make her hair look extra shiny followed by a trim. 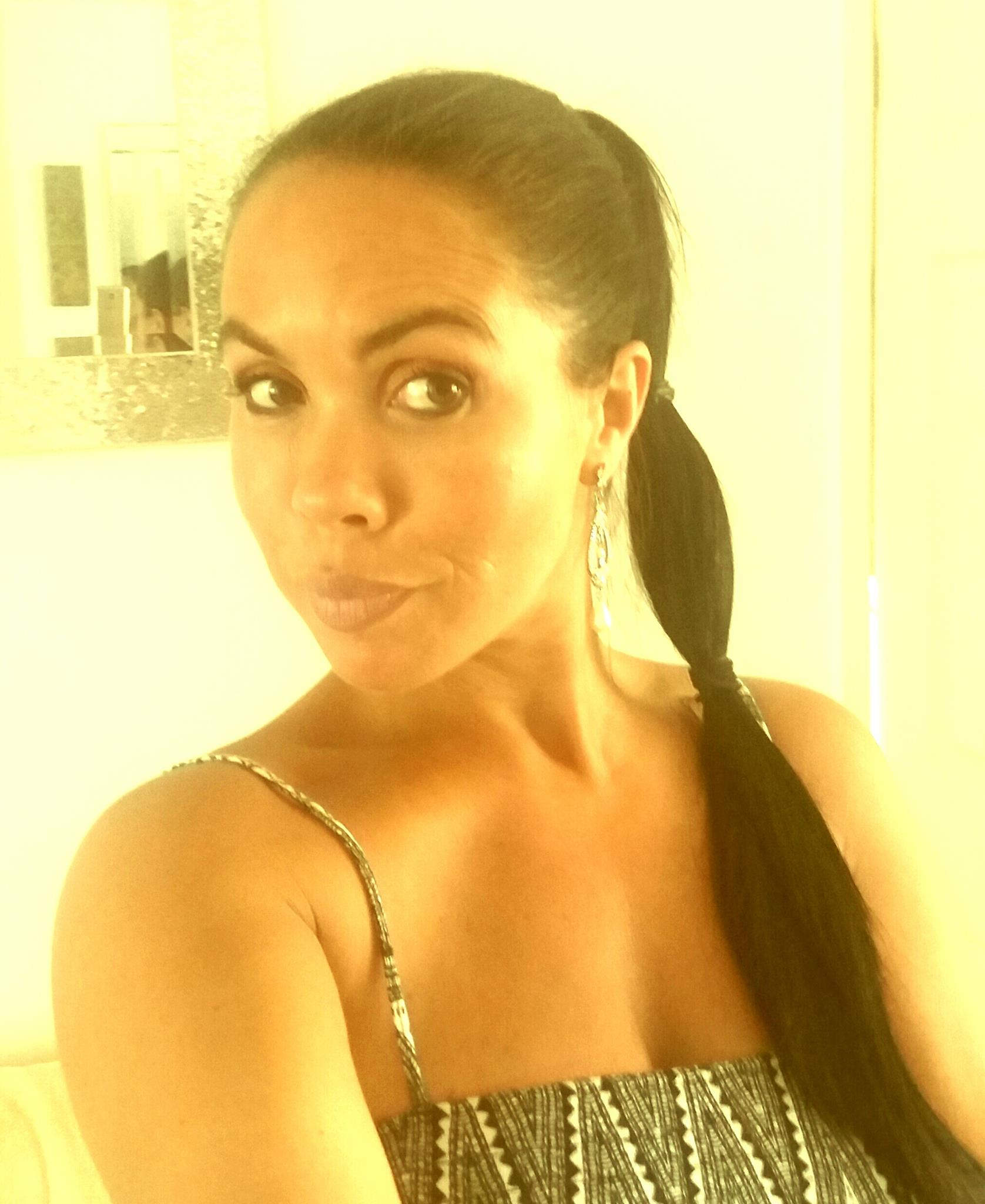 Nurse Kimberley Gorton has been awarded almost £6,000 in compensation after a botched dye jobCredit: Triangle News

But she was left in agony after she was placed under a dryer to develop the colour quicker and her hair became a tangled mess once it had been washed.

Kimberley, 36, had to call in sick at work to spend an agonising 13 hours at the salon over the next four days as two hairdressers tried to comb, brush and rip out the knots.

Eventually she was told there was no option but to cut them out leaving her with short, uneven locks at the back and one long piece of hair at the front.

When she complained, the sobbing mother said she was told: “Don’t worry it will grow back and you can always wear a wig.” 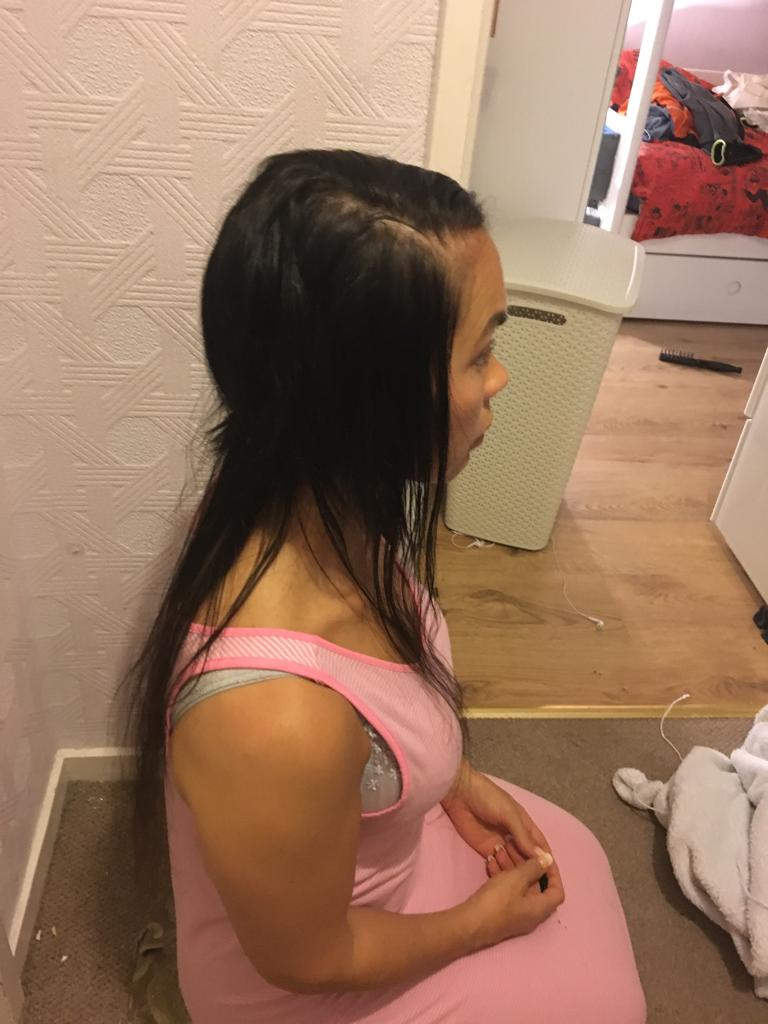 Kimberley was left in agony after she was placed under a dryer to develop the colour quicker and her hair became a tangled messCredit: Triangle News

Furious Kimberley, who developed a fear of hairdressers and anxiety over the trauma, was so upset she couldn’t stop crying and had to be prescribed medication by her doctor who likened her reaction to ‘grieving’.

She complained to the salon, Shenton Hair Care, in Wilmslow, Cheshire, who said: “We did spend over two hours with you after the salon closed the following evening to remove knots… and a vast amount of time the following two days trying to resolve this problem.

“We understand that it is upsetting, however we feel that we have been more than accommodating in the circumstances.”

But Kimberley was awarded £5,574.48, after they eventually admitted liability. 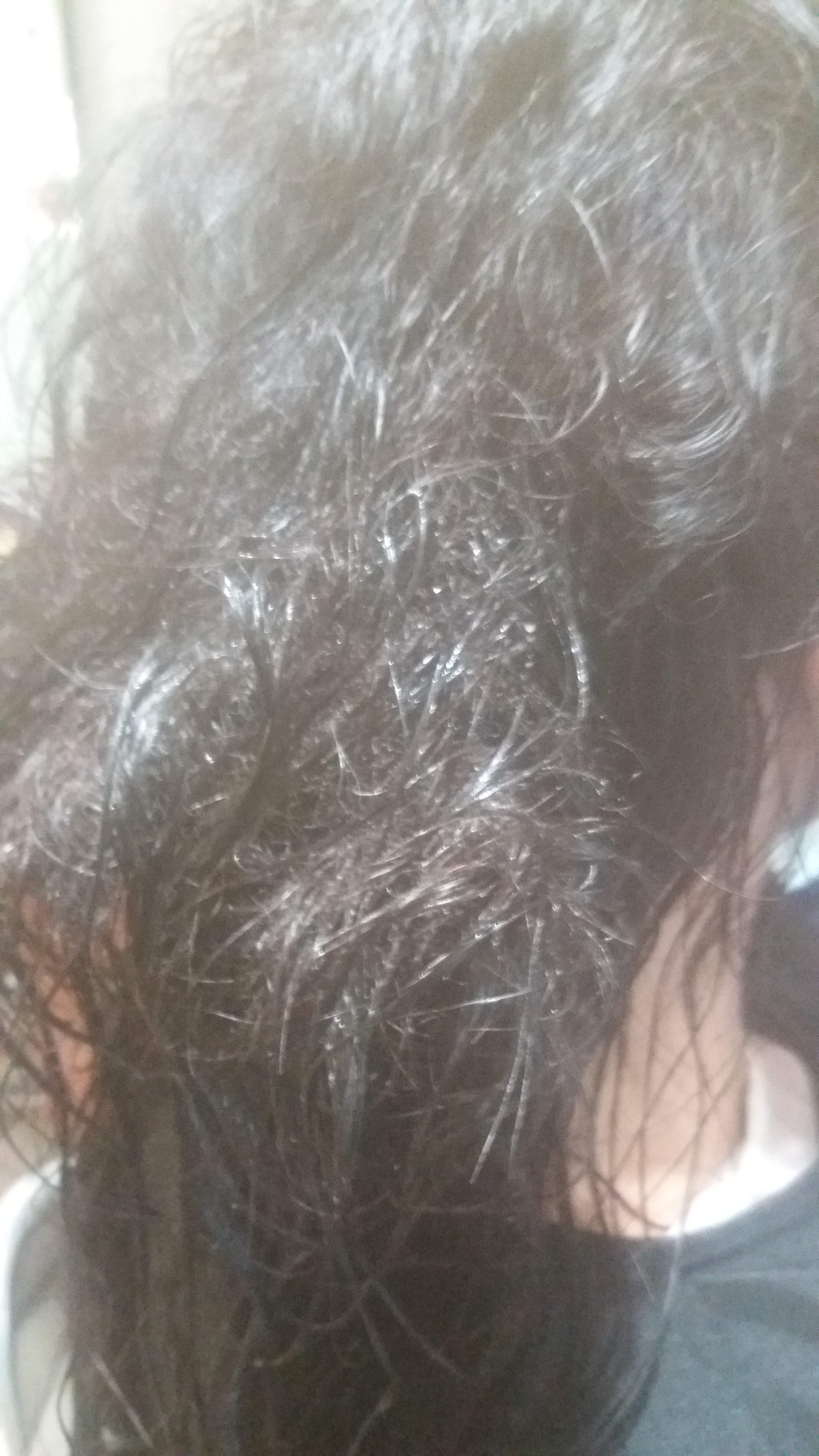 Kimberley had to call in sick at work to spend an agonising 13 hours at the salon over the next four days to rip out the knotsCredit: Triangle News

She said: “My hair has always been my pride and joy.

“I’ve worn it long since I was a child, but decided to grow it past my waist around 16 years ago. I take care of it and think it’s part of my identity.

“I have felt ugly and unfeminine since they chopped it off and had to hide myself away.”

The mum-of-six’s bad hair day began when she went into the salon for a semi-permanent colour, wash and trim last September. 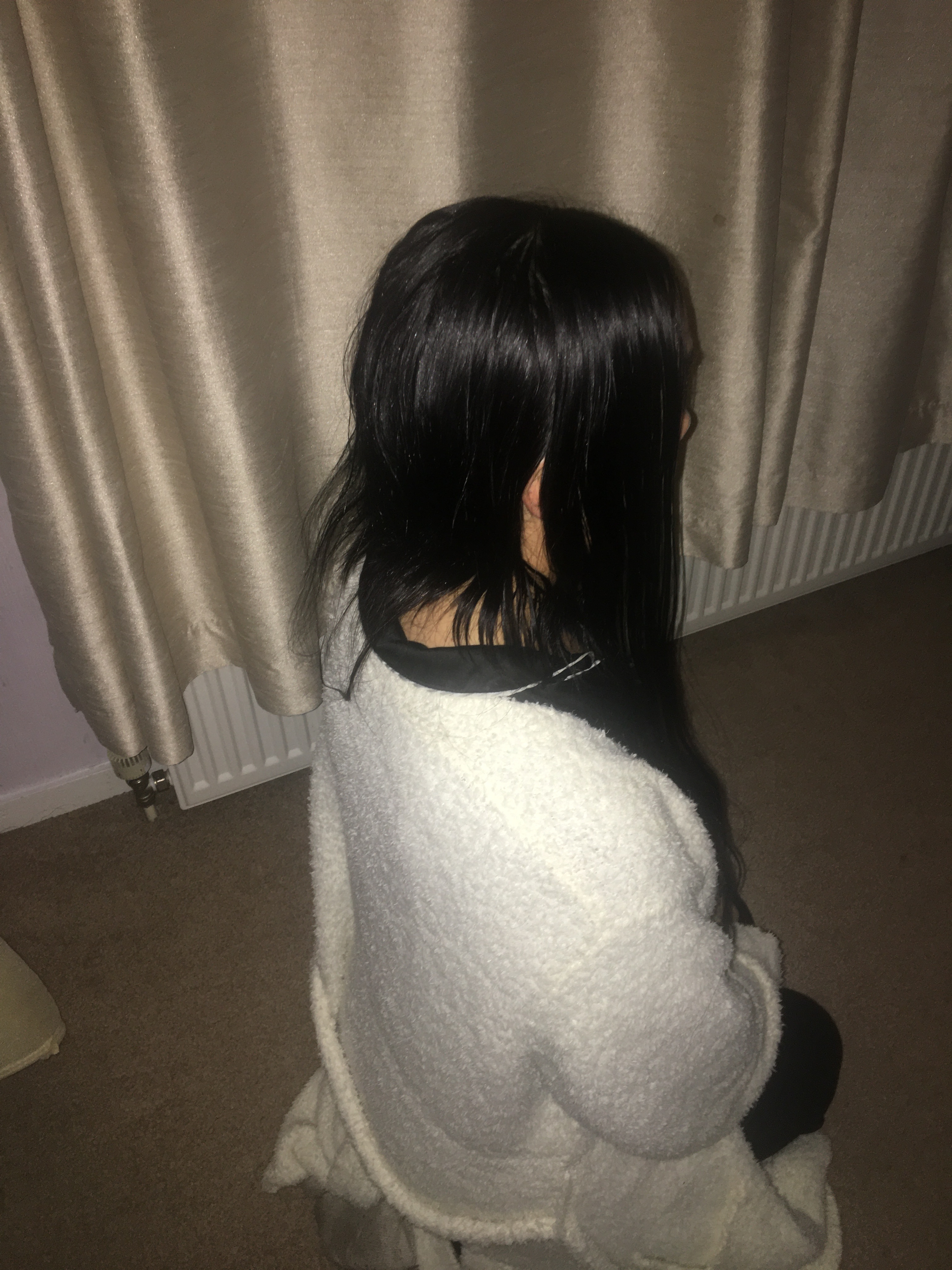 Furious Kimberley has developed a fear of hairdressers and anxiety over the traumaCredit: Triangle News

She said: “I’d had this colour done before as it washes out and makes my hair look glossy.

“And I’ve been to this salon on and off as I just have my hair trimmed every three months or so and I’ve never had any problems.

“I’d decided to have it done as I’d had my hair braided elsewhere three weeks before for a change and when I took the braids out my hair looked frizzy.”

Kimberley said she told her hairdresser that she hadn’t washed her hair for three weeks because she’d had it in the braids, but the woman was happy to put the colour straight on her hair. 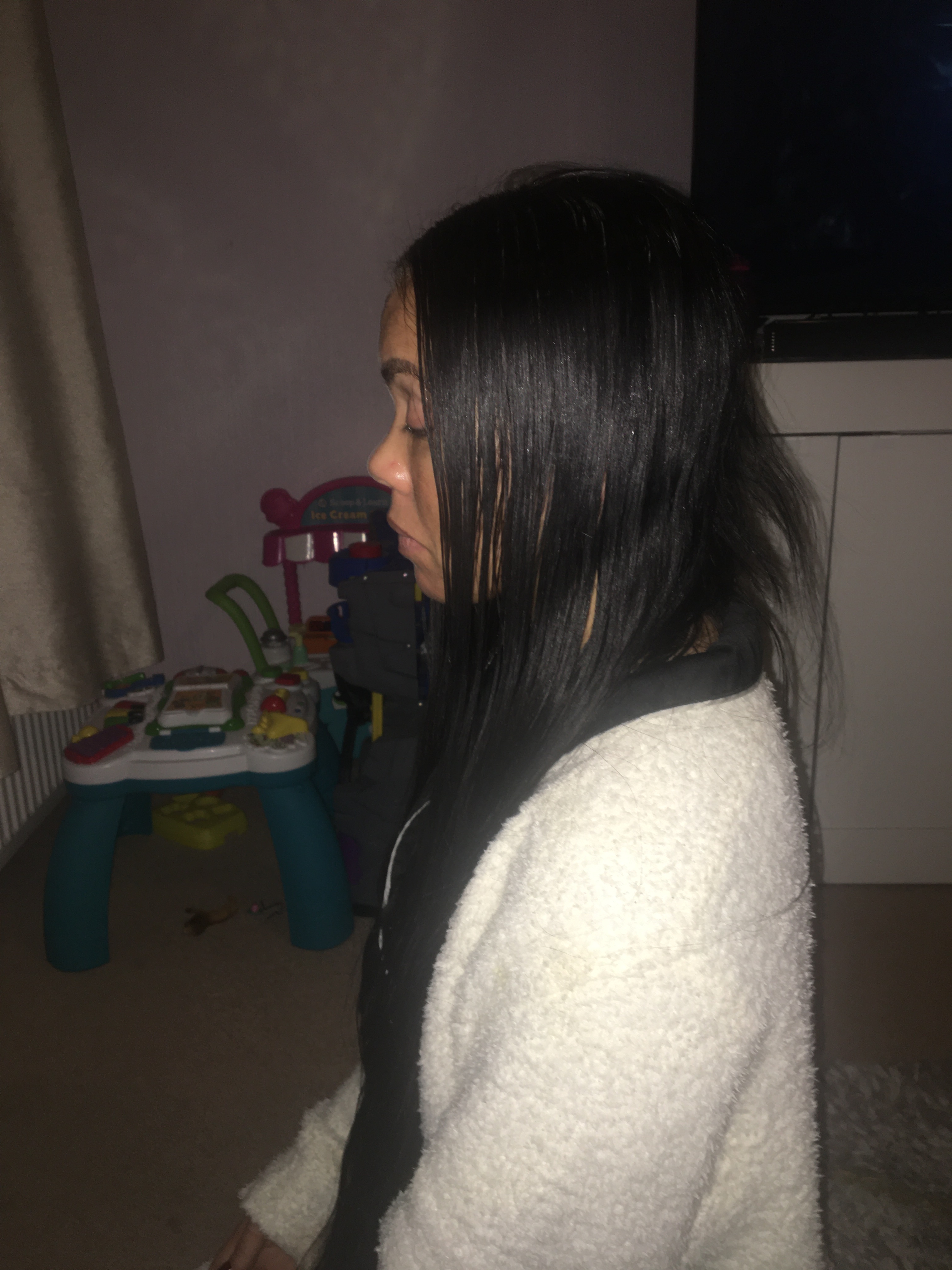 Kimberley was so upset she couldn’t stop crying and had to be prescribed medication by her doctorCredit: Triangle News

She added: “I’d booked to have it coloured, washed and trimmed.

“The hairdresser put me under a silver plate hairdryer as she said it would help the colour take faster.

“After ten minutes she took me to the basin to wash the colour off. After my hair had been washed I sat down in front of the mirror expecting it to be cut, and I couldn’t believe the huge knots at the back of my head.

“There was a giant dreadlock twisting to the right and another smaller dreadlock on the left, but it was the whole of the back of my hair.

“I said ‘Oh my god, what’s happened?’ and she said I didn’t need to worry she would get it out.

“But then she started yanking my hair, trying to get a brush through it. It hurt as she was pulling so much.

“I told her that it hurt and she gave me the brush but I couldn’t get it through my hair. It was twisted and knotted up so tight, the brush wouldn’t touch it.” 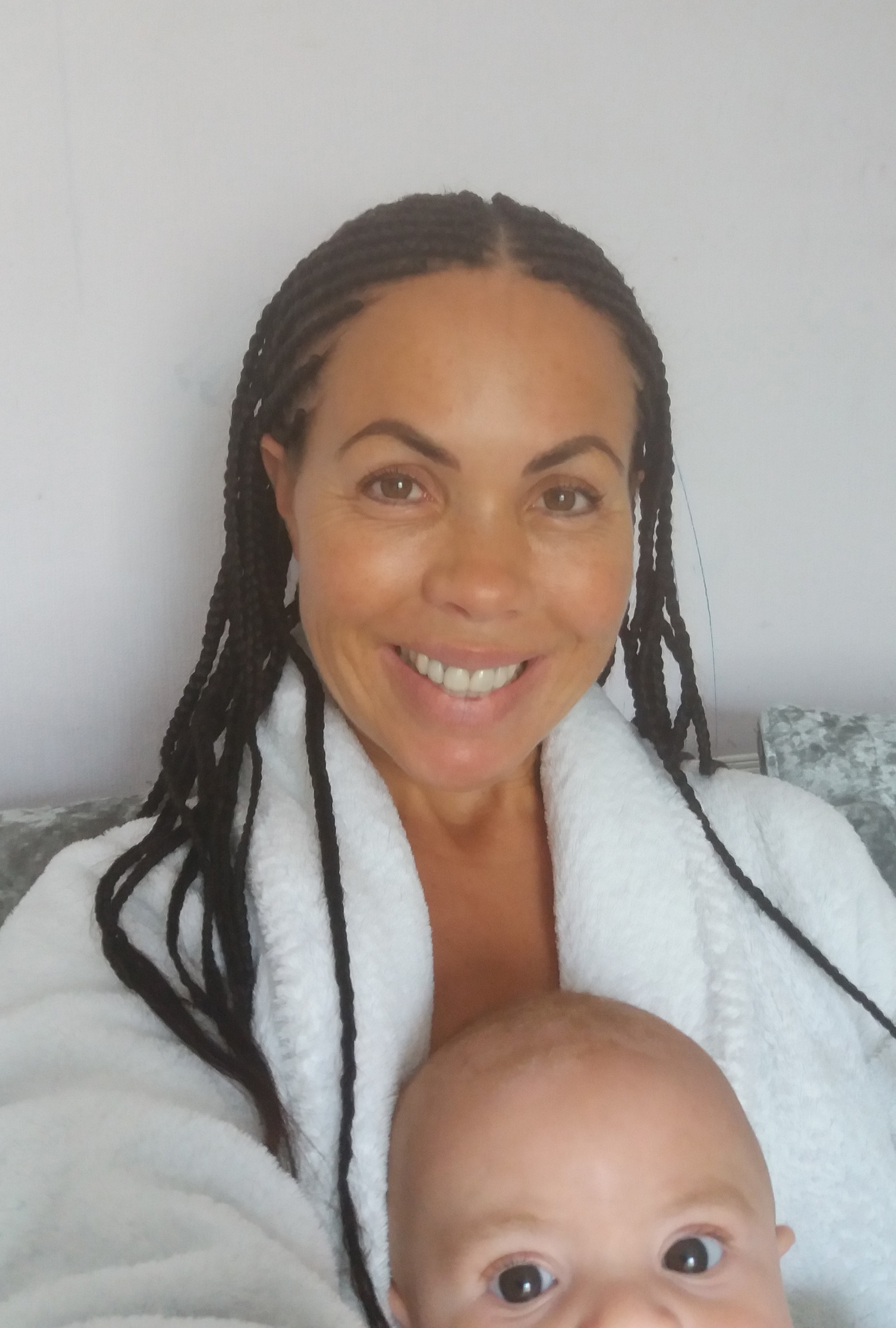 Kimberley was relieved that the hairdresser admitted liability and she was eventually compensatedCredit: Triangle News

After an hour, Kimberley had to leave to go on the school run.

She said: “The hairdresser said she couldn’t do anything as she was going out later and had a day off the next day so she told me to come back the day after that.

“Then she gave me a hairnet to put over my hair. I looked ridiculous. I was so angry and nearly in tears.”

She complained in writing later that evening and left an angry voicemail asking for help.

Another hairdresser at the salon told her to come back in at 6pm the following days so she could help.

Kimberley said: “But she told me to look on YouTube for a way to get the knots out of my matted hair. Nothing worked.” 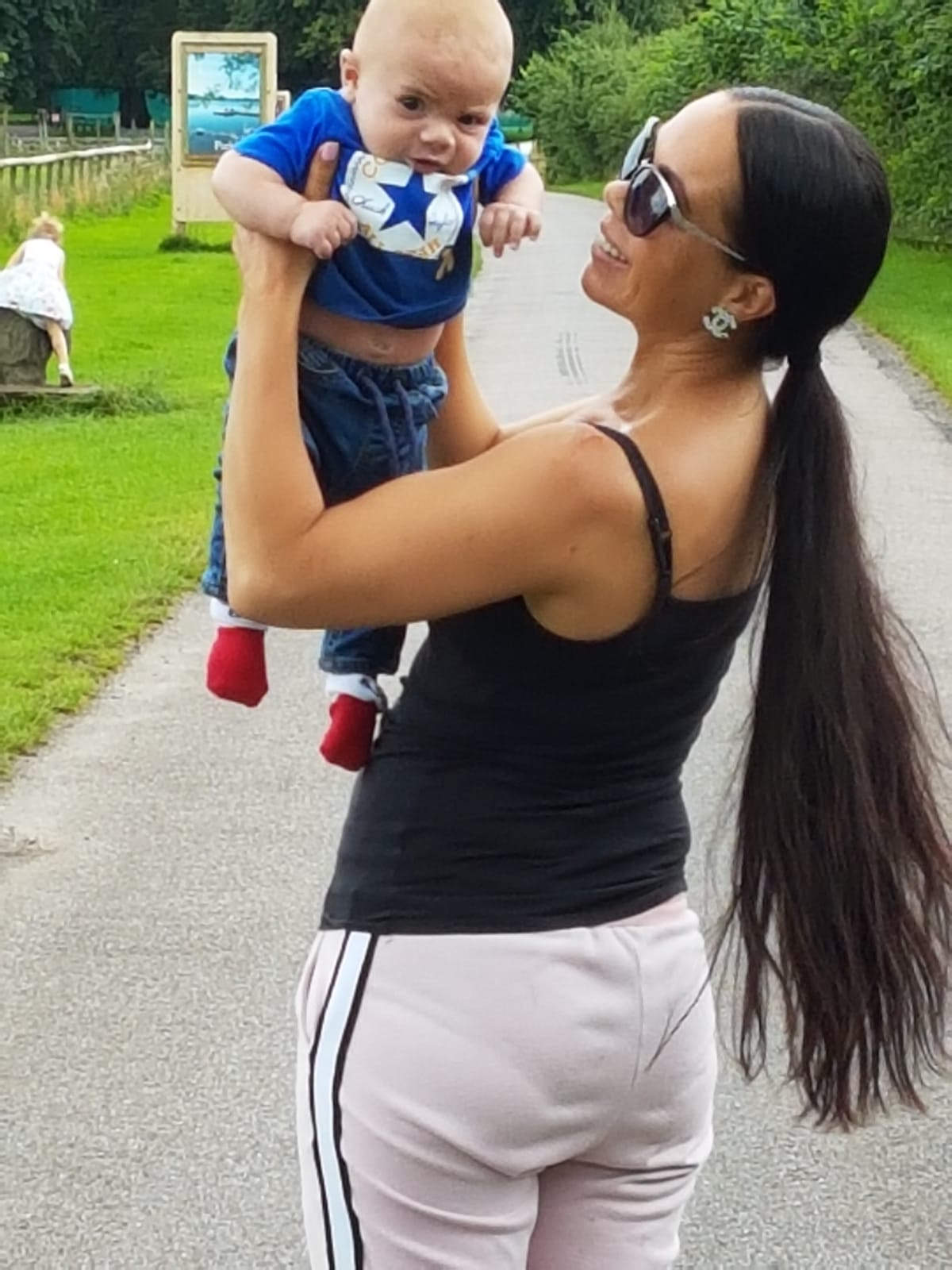 “The next day she was shocked when she saw the state of my hair. I was so upset.

“I had a headache from all the pulling the day before and couldn’t sleep as the dreadlocks were so big and uncomfortable.

“But she spent two hours trying to tease out the knots with a comb and didn’t make hardly any progress.”

Kimberley went back for another five hours the next day but the following day the original hairdresser said she would have to cut her hair to get rid of the knotted mass. 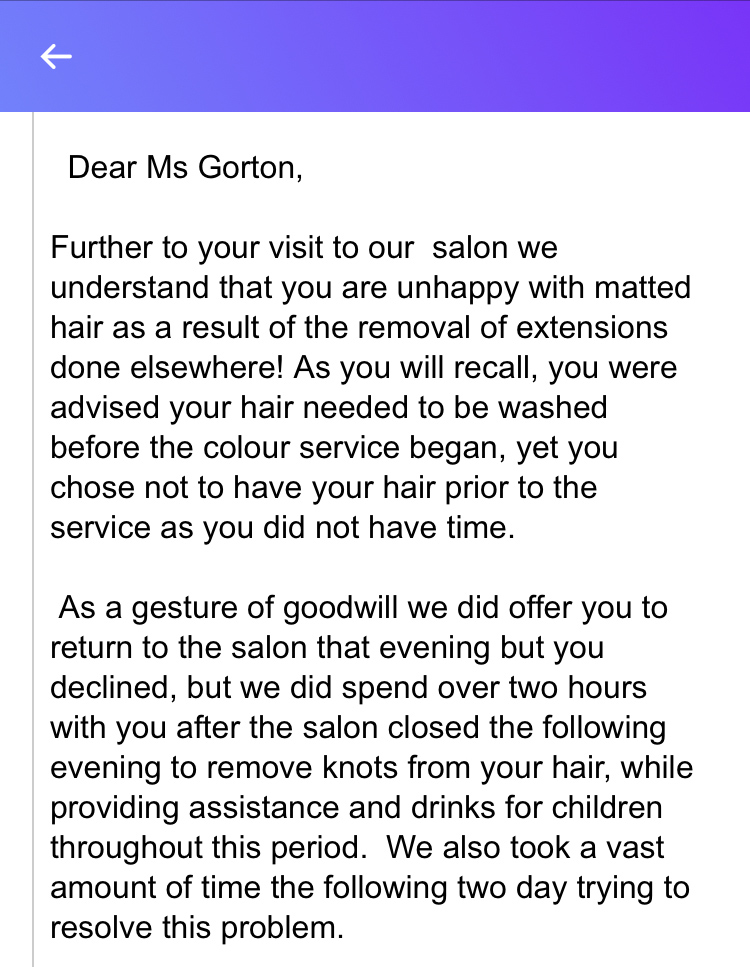 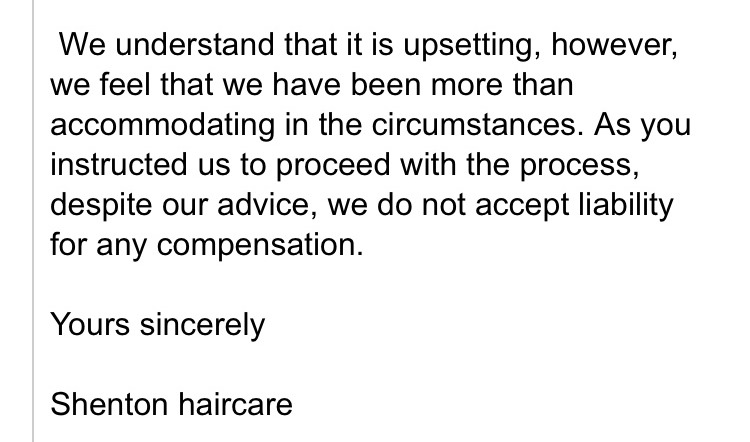 She said: “They’d covered the knots in conditioner, olive oil, everything and they wouldn’t budge.

“They even started going through it with their hands to try and rip my hair apart, but nothing worked.

“I asked if there was any other option as I wanted to save my hair but there wasn’t. It was a mess.

“It looked like it had been hacked off. It was really short and uneven at the back and one side, then long on the other, but it was all thin and straggly.

“I looked so terrible I couldn’t even look in the mirror.”

Traumatised Kimberley hid her hair under hats or a hood as she was so embarrassed. 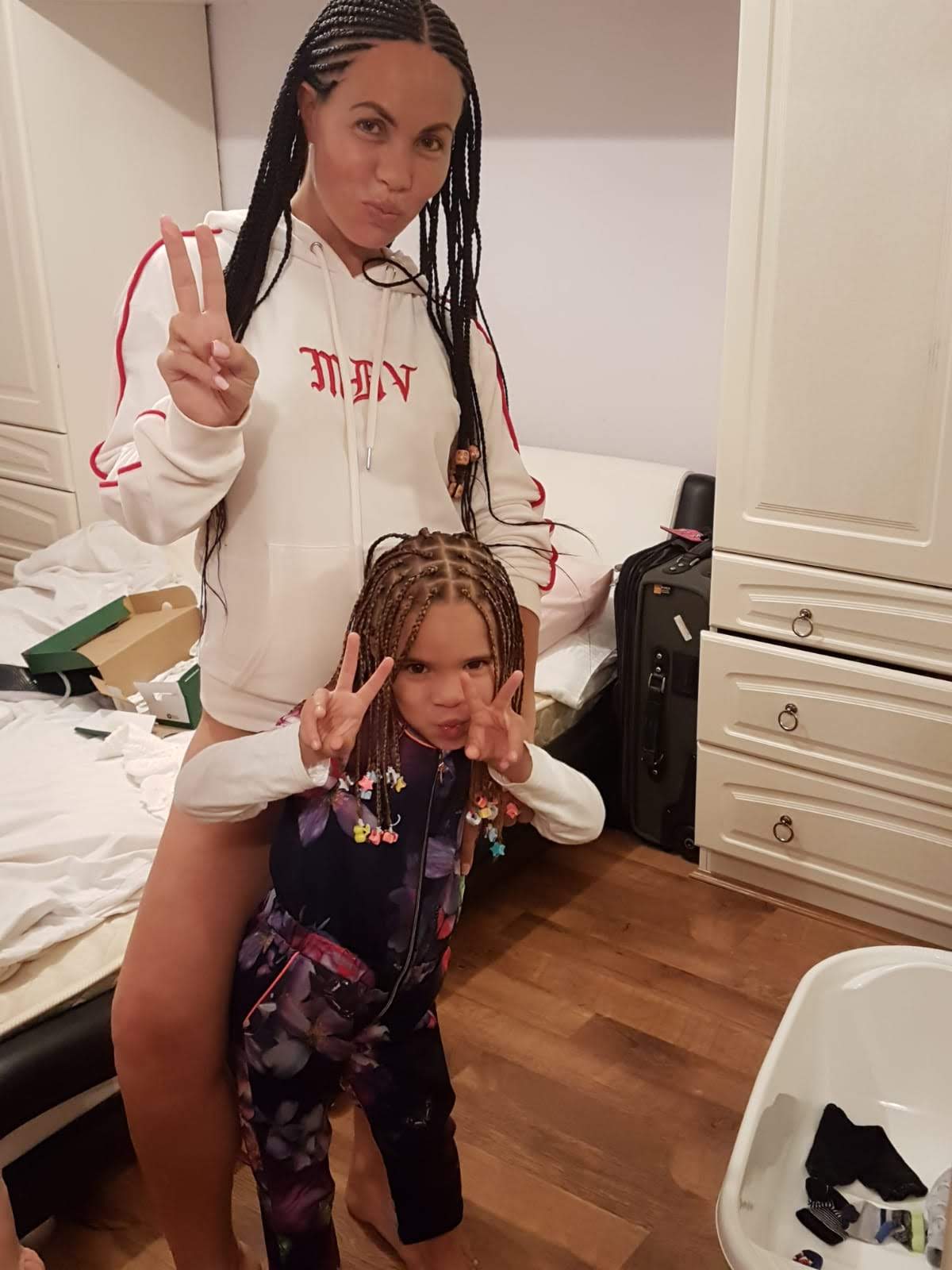 Kimberley said she has gone through a lot of mourning for the hari she lostCredit: Triangle News

“I tried to make sure no one saw me,” she said.

“For work I had to buy some hair pieces so that I could face people, but I was so embarrassed. My lovely long hair had been hacked to pieces.”

Depressed, she rang her GP who gave her anti-anxiety medication and arranged for her to have weekly counselling.

She said: “It affected me so deeply that he said it was akin to grieving and I suppose that’s what I was – I was mourning for the hair that I’d lost.”

After hiring a solicitor, Kimberley was relieved that the hairdresser admitted liability. But it took a further six months before she was awarded the sum. 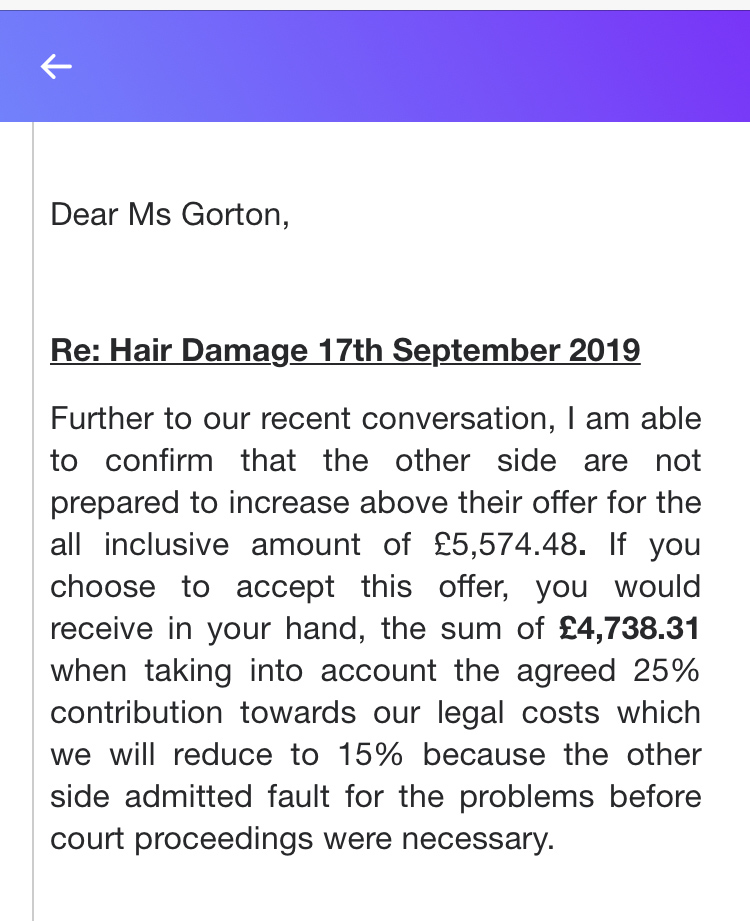 Kimberley was given a sum of money from the salonCredit: Triangle News

She said: “It might sound trivial but I couldn’t sleep, eat or stop crying for months, I was so upset and I have been too scared to go to a hairdresser.

“It’s taken a year for me to get enough confidence to go back to one. I have an appointment to see what can be done, but I just want to grow it again.

“Everyone has always complimented me on my hair. I’ve had it long since I was a child and to lose most of it has been so traumatic. I will never have it coloured again.”

We also shared how a mum claims she’s got the ‘worst hairstyle of 2020’ after her stylist ‘got drunk necking gin’ while dyeing her locks.

Meanwhile, these are the biggest beauty blunders of lockdown from VERY short haircuts to dodgy manis and horror hairdye disasters.

And a woman was left in tears after hairdresser butchers her locks during birthday trim – and then LAUGHS about it.