Too often, the best beauty stories go Untold, solely based on a person’s skin color, religion, gender expression, disability, or socioeconomic status. Here, we’re passing the mic to some of the most ambitious and talented voices in the industry, so they can share, in their own words, the remarkable story of how they came to be — and how they’re using beauty to change the world for the better. Up next: Khalia Ismain, cofounder and managing director of Jamii, a discount card and marketplace for Black-owned businesses.

My Jamii story started at college. I went to the University of Manchester and studied politics, philosophy, and economics. It was a bit of a coming of age for me around the 2010 general election. The Labour Party was on its way out and Conservatives were on their way in, talking about austerity and cuts and making everything really awful if you are of a certain demographic. I was adamant that I could be a better politician, so I got into politics. But the more I got into it, the more I realized politics is a mess. The reward is not worth it whatsoever.

The better I understood history and the mechanisms of politics, I thought, if I want to enact some sort of social change or positively impact a lot of people in some way, it’s actually better for me to either work for a social impact organization or a not-for-profit, or just start something myself.

I never saw myself as someone who wants to be an entrepreneur — I wanted to be a business owner. But when I was at school, one of my roommates ran something called “Manchester Entrepreneurs”, so I joined it just because I was always interested in practical business. Then, when I graduated, I didn’t have a clue what I was going to do.

I wanted to see what was out there — I did this government-run program called International Citizenship Service and went to Kenya for three months where I was working with micro-entrepreneurs. I worked as an extra pair of hands and a sounding board, helping them pivot their business and understand certain key concepts to raise money. It was a completely life-changing experience because, before I’d gone there, I had no idea what it meant to start a business, whereas when I came back, I realized that you just have to start; just take a small step and see if that works.

Around that time in 2013, the Black Lives Matter movement started. It was a period of time where a lot of people my age were starting to understand concepts of racial injustice and the impact of colonialism. I kept thinking, What can I do? Is there something that I can do as an individual? I realized I can support Black-owned businesses; I can make sure that I buy from them more regularly. But more importantly, I asked myself, How can I make sure I’m not just doing it because it’s trending? Ultimately, it’s not diverse spending that makes change; it’s repeat, ongoing spending.

Before I even went to Kenya, my partner and I came up with this concept of a card for Black-owned businesses. The idea was to get people thinking about buying from them regularly because we had a Taste card at the time that we used constantly. We had this concept, but I was just like, “I have no idea what to do now about this great idea.” I came back from Kenya with the mindset that starting is so simple. That very first step is asking businesses if they would want to be on the card, and I didn’t need to worry about anything else. I started reaching out to people — luckily, more people said yes than said no — and then I moved to the next step, which was social media. 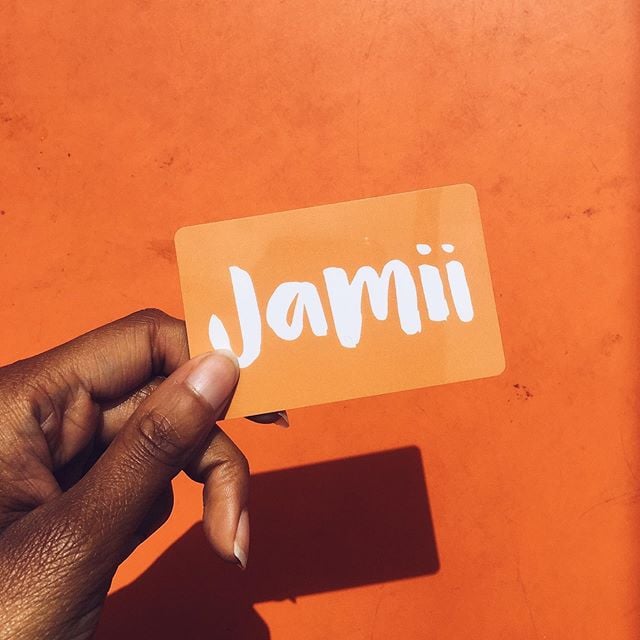 It then came time to decide on a name. I wanted something that was positive, inclusive, but also represented what we were trying to achieve. I was speaking to one of my friends who I met when I was in Kenya and I was like, “Oh, maybe a name that is Swahili would make sense”, because that’s where I got the confidence to actually do this. He was like, “What about Jamii? It means ‘community’ in Swahili” — and that was it, it just captured everything.

That was when we got the ball rolling really. We had a name, had some people saying they’d be interested, and then it was time to start an Instagram. We first launched with 25 businesses and slowly added more on, because I still had a full-time job. I was working for two small businesses at the same time, which launched at the same time, and I was the first employee for both of them. I was operations manager for one and marketing manager for the other. It was great work experience; I learned everything on their dime. In the beginning, Jamii grew really slowly. By 2017, we’d doubled to 50 businesses. Then, things started to slow down for us a little bit, just because I was so busy with work.

I decided to quit those jobs to just focus on Jamii. I started to get more and more people reaching out, and I just thought, This is what I really want to do. . . I don’t have a mortgage. I don’t have any children. I live at home with my mom — if I’m not going to do it now, I’m never going to do it. I just have to go all in, give myself a year, see what happens. At the beginning of 2019, I was still working two days a week as the operations manager, but the rest of the time was dedicated to just working on Jamii.

During 2019, we really started to evolve from a discount card to more of a holistic platform supporting Black-owned businesses. A lot of people were saying “I love what you do and I love what you’re about, but I wish that you did more.” We started to explore all of those different avenues. We have very limited resources so ended up doing a whole load of experiments, which was great. Though, it was a really, really hard year. I went from working in two businesses and being around a lot of people all the time to being by myself pretty much 24/7.

Fortunately, in the first month of 2019, we got an article in the Metro, which for me, was huge and made me think that it’s going to be OK. It was almost like a confirmation I made the right decision because it was a big spread and we got a lot of attention from it. But that whole year was just really challenging. We were trying to gain confidence, and generally, Jamii was received quite well. Most people thought it was a great idea, but getting people to convert from “great idea” to, “let me buy a Jamii card,” was a long, long journey. We also got a lot of people being like, “I don’t get it. Why don’t you just do it for all small businesses?” or “Why don’t you do a BAME (editor’s note: BAME refers to “Black, Asian, and minority ethnic” in the UK).” I think it was only last year that it really clicked for people what’s different about the Black community as opposed to any other community.

Initially, I was panicking a little bit because we had set our strategy for the year, which included lots of events; we wanted to be outside, meet people, and have conversations. Obviously, the pandemic hit. Back to the drawing board we went, but actually, fairly quickly, what started happening was, because of all the shops being shut, everyone had to order online, and there was a huge push around supporting small businesses and supporting minority ethnic businesses because they were really getting crushed by the lockdown.

Things started to pick up quite quickly for us, especially because we launched the marketplace, so orders could actually happen on our site now. That meant that we could actually see when traffic started to pick up. We’d put a lot of emphasis and energy into creating content for other small business owners who may be worrying and struggling. Jamii’s got a load of experts, like accountants and marketers, to talk about things they could do during the pandemic to make sure they stay afloat. 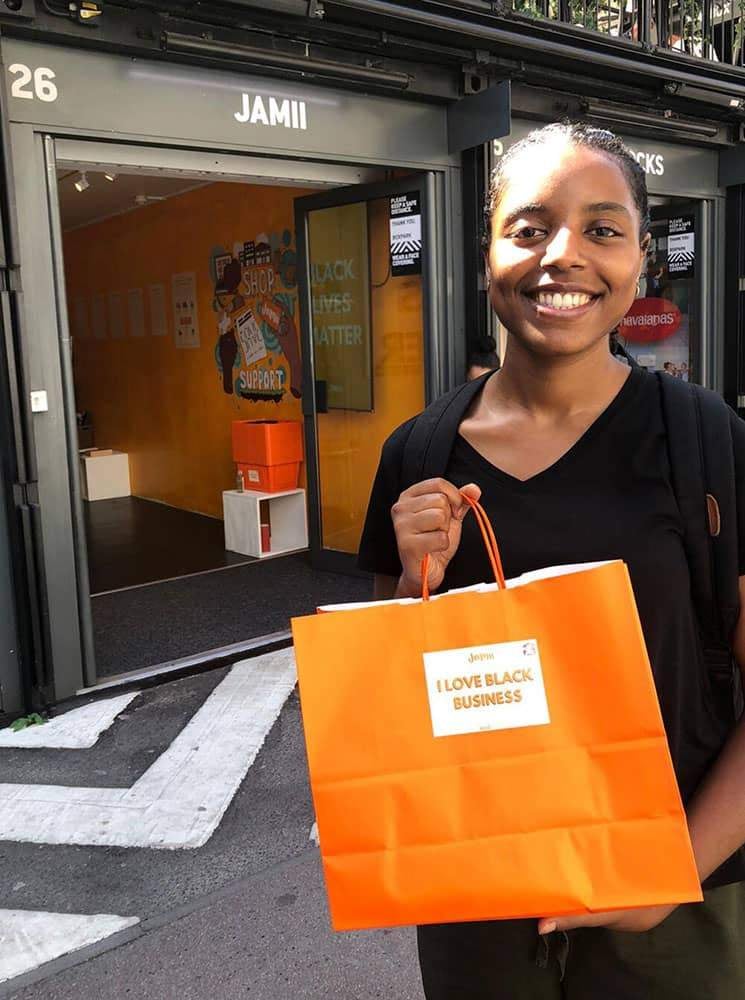 Then, when the murder of George Floyd happened and during the six weeks following that, everything exploded for us. All of a sudden, everyone was looking for a Black-owned business to buy from, and we had a huge influx of orders and traffic. The website crashed multiple times because everyone was trying to get onto it. It felt like everyone was talking about Jamii. My sister who runs the site would be like, “We’re starting to get traffic from this media platform; now we’re getting people from that media platform.” But obviously, it was very, very bittersweet because on the one hand, it was a very emotional time, and we’re trying to reconcile ourselves with everything that was going on.

Since then, it’s definitely been a mixed bag when it comes to people’s support of Black-owned businesses, but I’m positive about it because what happened during those six weeks was never going to be the same. For me, what mattered was what happened at Christmas. Christmas is obviously when everyone is gift-giving — that is the time people are most likely to visit small businesses and spend the most money. On our site, Christmas was better than the summer, which for us was a really positive sign. Since then, things have dropped, but they haven’t gone back to how they were pre-May.

We had a lot of big organizations reach out to us during that summer and we had a lot of conversations that went nowhere after, but we have had some really fruitful conversations that continued on. For instance, we did a short film with Pinterest, which came out this summer. We were so proud of it. We collaborated with Clear Channel to give free advertising slots to Black businesses. We’re in conversation with a number of other big organizations about initiatives as well right now.

I feel very blessed and excited to be in this position now where everything that I wanted to do so many years ago is finally happening.

We saw the short-term impact; now we’re in the medium term where people are fighting to actually allocate real budgets, which is really exciting. I think we will see continued initiatives and support going into 2022. The individual customer is there still doing their part.

For our creators, I’m really excited to have their products on the high street, to have them stocked, and to continue telling their stories. Last year, we created a reel that looked at wins from 2020. I can’t wait to see the 2021 version because everyone has really amped up everything that we’ve been doing. More people have been hired, more product lines have come out, more creators have been on TV. There are so many wins, it’s really exciting to see all of that.

I feel very blessed and excited to be in this position now where everything that I wanted to do so many years ago is finally happening. We’ve been working on building a platform for three and a half years before things actually started moving properly, and it’s just really exciting that we’re still doing it.

How Chanel No. 5 Has Kept Its Cult Status For 100 Years

My hairdresser promised he could make me platinum blonde

A Guide to 15 Different Types of French Manicure Trends