Meghan Markle and Prince Harry were smart to eat at Melba’s during their visit to NYC.

On Meghan Markle and Prince Harry’s trip to NYC, they stopped at Melba’s in Harlem for lunch. 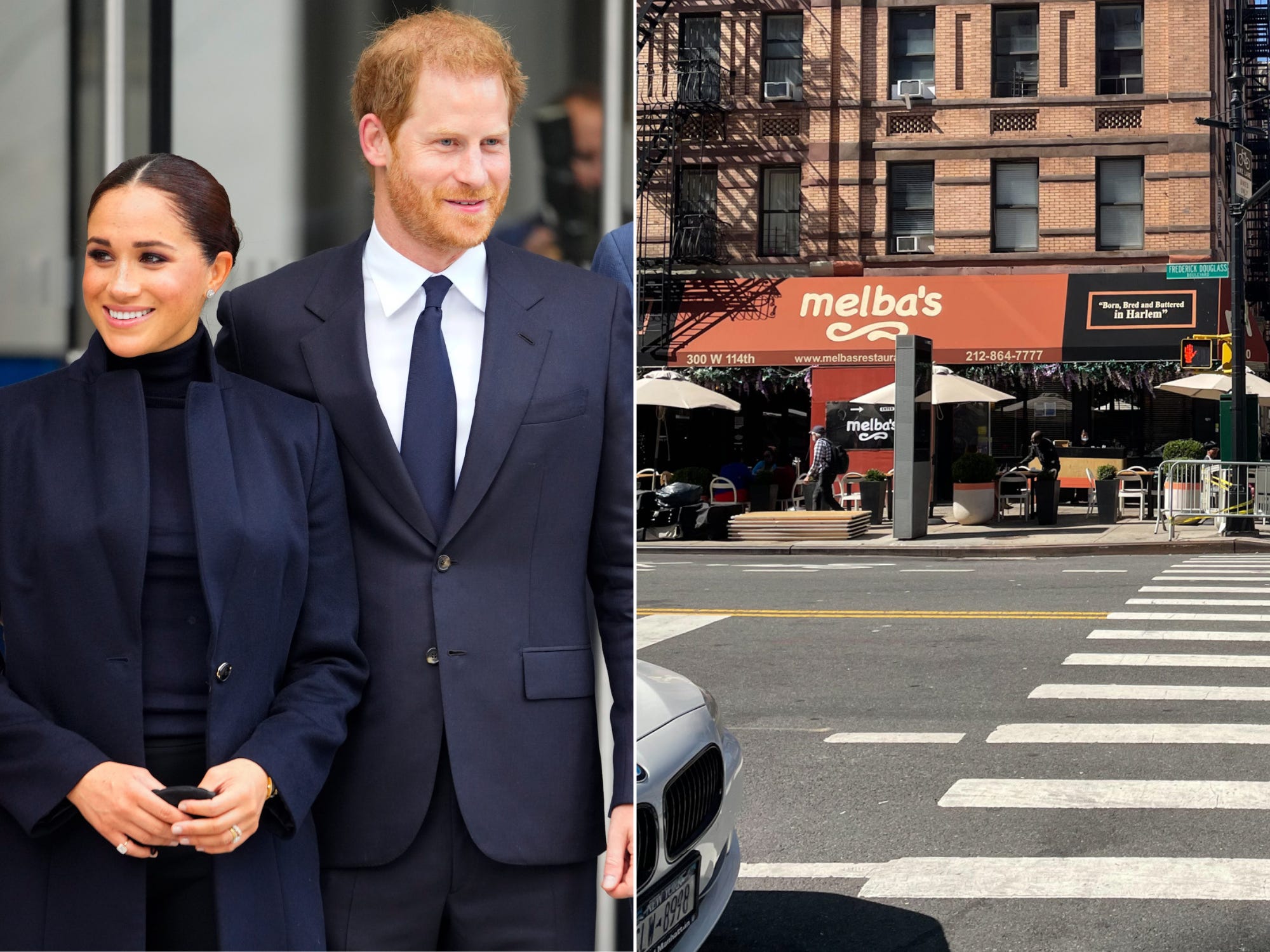 Harry and Markle were in town the weekend of September 25 for the Global Citizen Live charity concert to promote vaccine equity, Vanity Fair reported.

Their schedule was filled with public appearances, like their trip to One World Observatory, and they stayed at the famously royal Carlyle hotel.

After paying a visit to PS 123 in Harlem  — where Markle read her children’s book, “The Bench,” to students — they traveled 26 blocks straight down on Frederick Douglass Boulevard to the popular eatery.

The Harlem restaurant is legendary for its southern comfort food from owner Melba Wilson, who opened the doors in 2005. 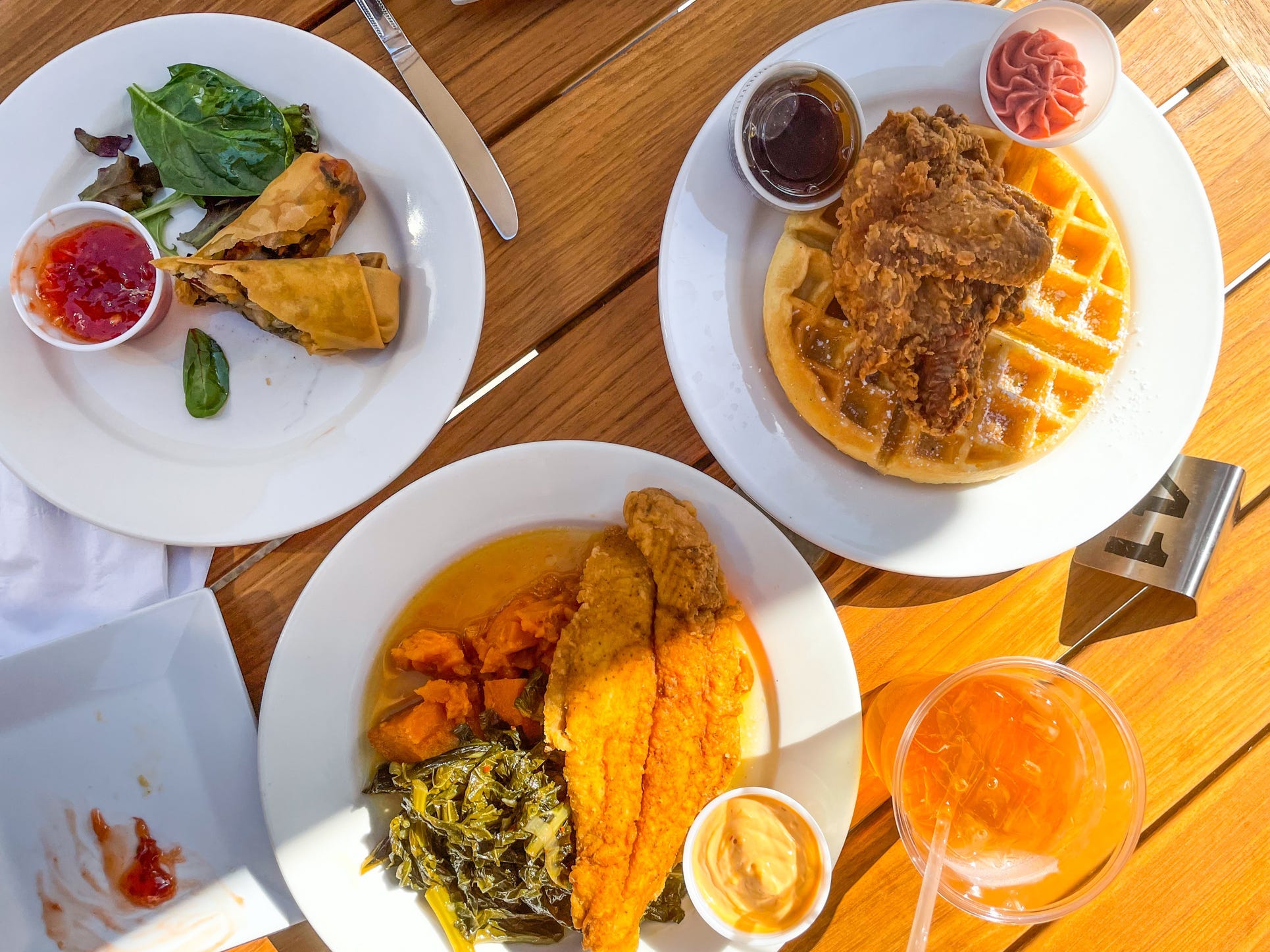 I tried the whole meal that the pair reportedly ate at Melba’s.

Someone who was also dining at Melba’s on Saturday told Page Six what the pair had ordered.

“Harry said it was the first time he’d ever tried chicken and waffles and remarked it was delicious,” they told the publication. The diner added that Harry mentioned Markle’s mom, Doria Ragland, makes collard greens at home and they’ve become a family favorite.

Melba’s declined Insider’s request for comment on anything related to Harry and Markle’s visit.

So, I got all masked up and headed uptown to try out their meal for myself. 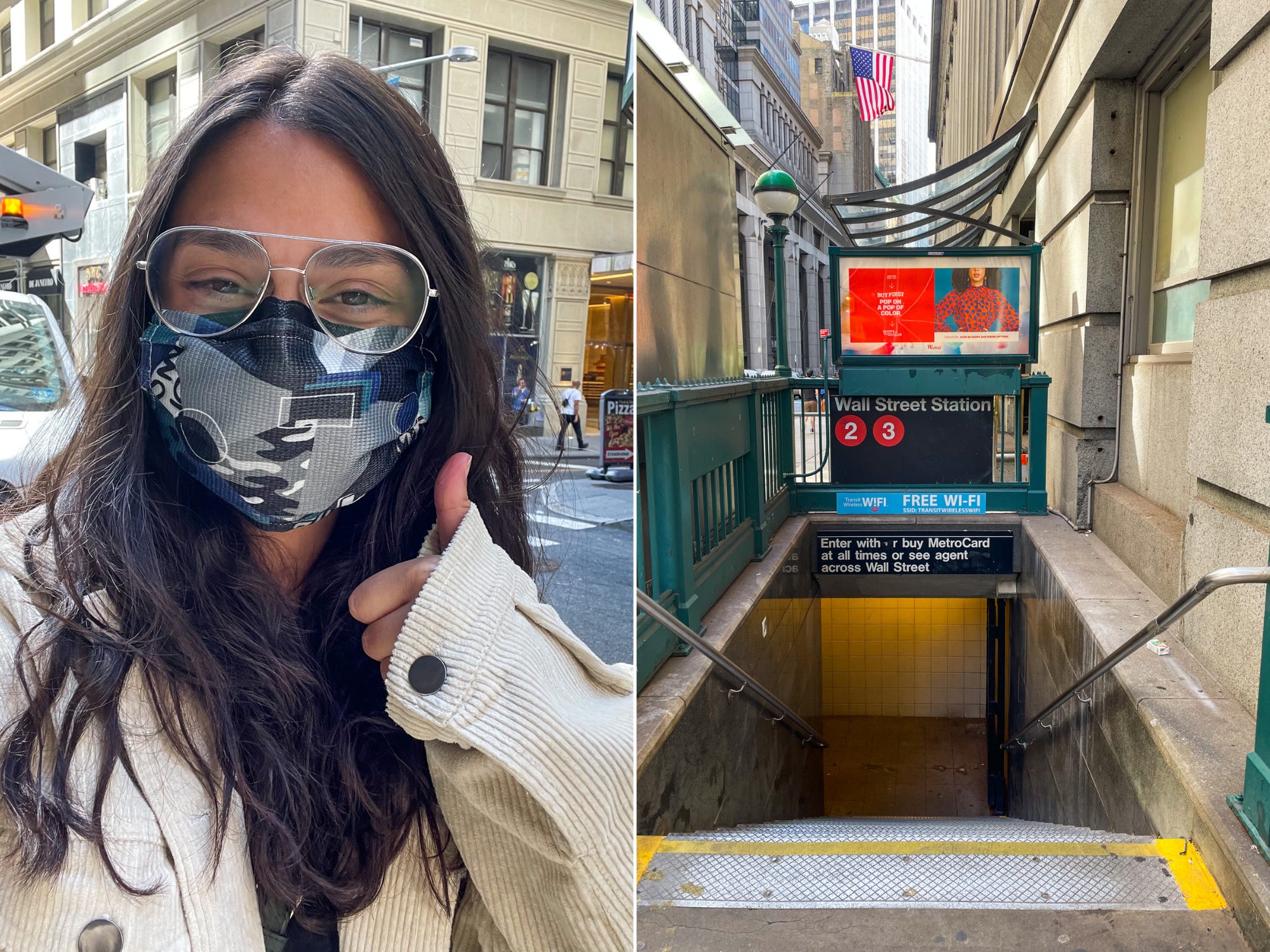 The restaurant was just a 40-minute ride away from my apartment.

It took me 40 minutes on the express train to get to Melba’s. The nine stops went by quickly, except for the fact that I couldn’t stop thinking about the meal I was about to have.

I eat fried chicken semi-regularly at this point since I have a running ranking of the fast-food sandwich version, but it’s been a while since I’ve had a proper piece of fried chicken from a sit-down spot like Melba’s. The anticipation was enough to make me drool (it was a good thing I was wearing a mask).

I was early for my reservation, so I decided to explore the immediate neighborhood. 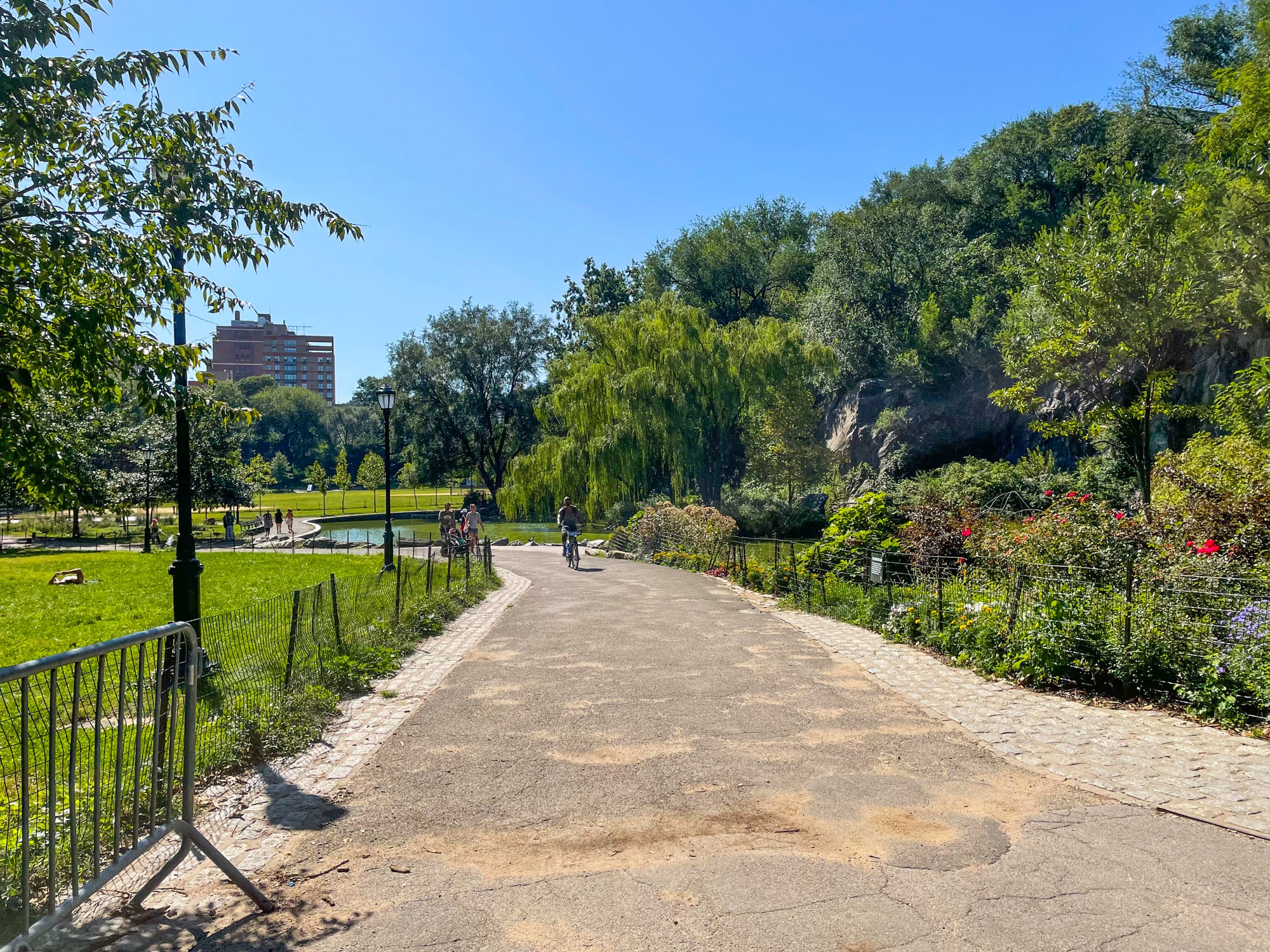 Looking downtown from the path in Morningside Park.

Melba’s stands on the corner of 114th street, surrounded by pre-war architecture, steps away from a beautiful park, and just four blocks north of Central Park.

Diners can head south for a pre- or post-meal walk, and if you’re an appreciator of the pre-war architecture that’s iconic in New York City, there’s plenty of that in the neighborhood as well. Just let your eyes — or Google Maps — guide you on your own tour.

Walking one avenue west, I happened upon Morningside Park — a lush space with a pond, a variety of flora and fauna that reminded me of the suburbs, and a beautiful view of city buildings all around.

Once I arrived at the restaurant, the first thing I noticed was the amazing service. 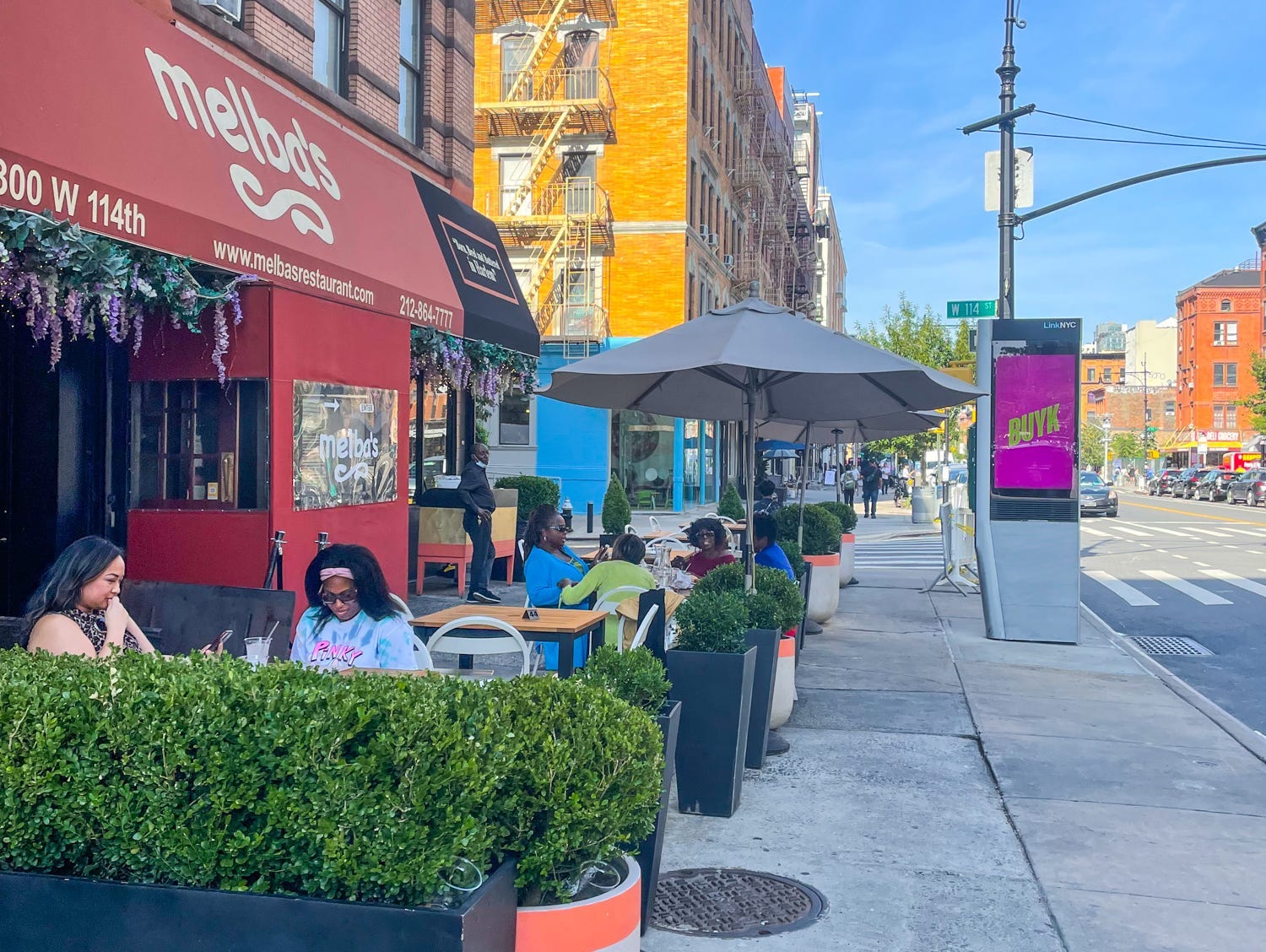 One of two outdoor seating areas at Melba’s.

I walked up for my first-ever reservation and was immediately treated like I was a weekly regular.

The staff had more of a family attitude than a formal restaurant service one, which I so appreciated. I instantly felt comfortable and even more excited about my meal.

I visited Melba’s on a Monday afternoon. The outside seating was about 50% full when I arrived and a few more tables had filled out by the time I left. Indoors seemed quiet. When I asked my server if the previous weekend had been busy after the royal couple stopped by, he told me that “weekends are always busy.”

Though it wasn’t the bustling scene he described, my Monday lunch crowd gave off positive vibes and there was lots of laughter going around.

It was finally time to order my feast, and the spring rolls were first to come out of the kitchen. 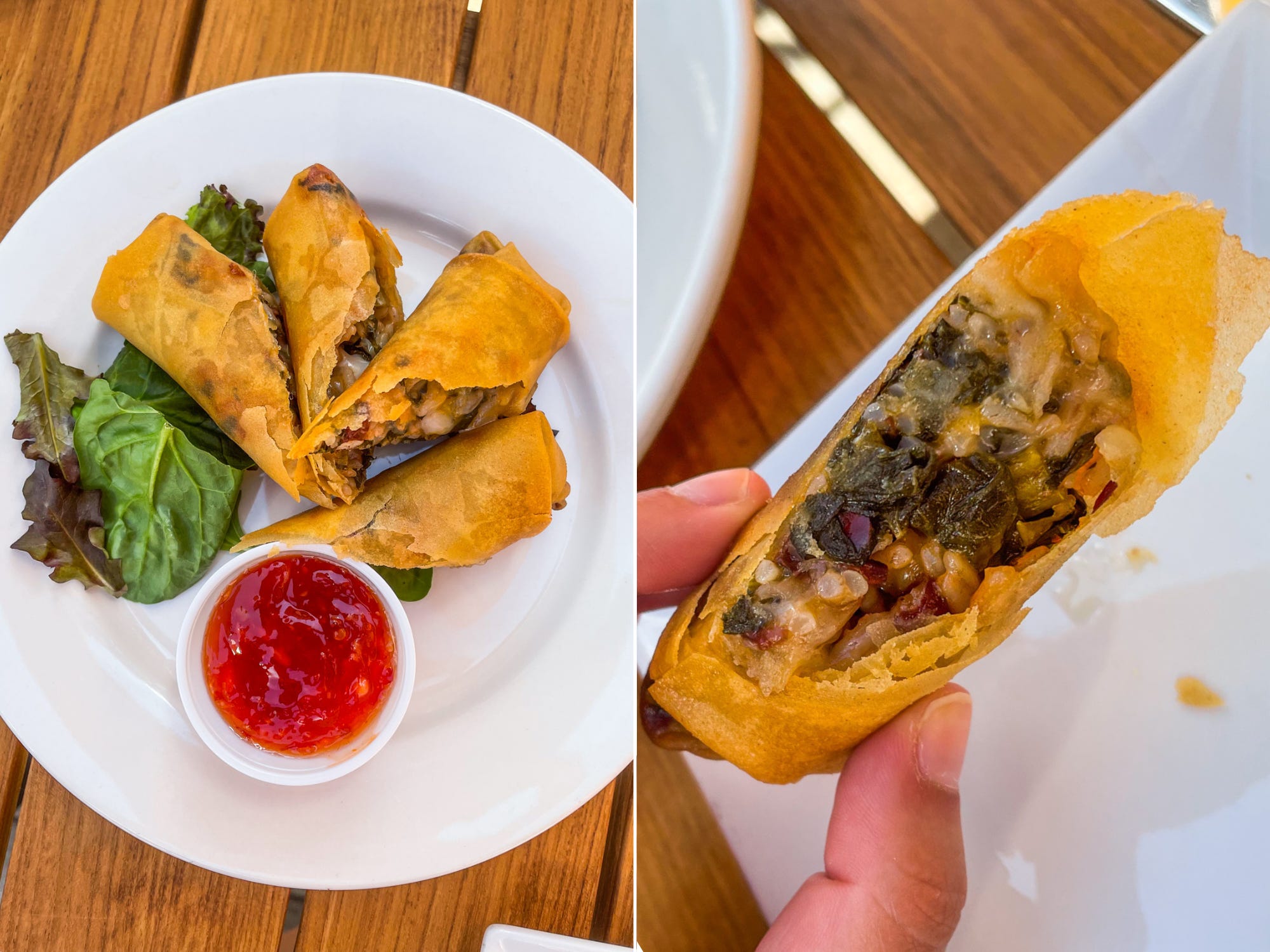 The team brought out the spring rolls for a first course.

Thanks to the kind and helpful staff, my multicourse meal was spaced out perfectly.

I listed everything I wanted and told the team member that he could decide which order things should come out in, which naturally resulted in spring rolls as an appetizer. This starter costs $9.95.

These wonderful bites were perfectly crispy on the outside and, on the inside, the ratio of black-eyed peas to rice to cheese to collard greens was spot-on.

Sometimes in a fried dish, cheese can get overwhelming when there’s more of it than anything else — I said sometimes. But that wasn’t the case with these spring rolls. There was just enough cheddar to hold everything together, and each of the other ingredients was able to stand on its own.

The dish came with a side of sweet chili sauce, which felt fresh and balanced out the richness nicely, though the rolls were also great on their own without any sauce at all.

My order of candied yams and Low Country collard greens came as sides for the fried catfish. I wasn’t mad about it in the slightest. 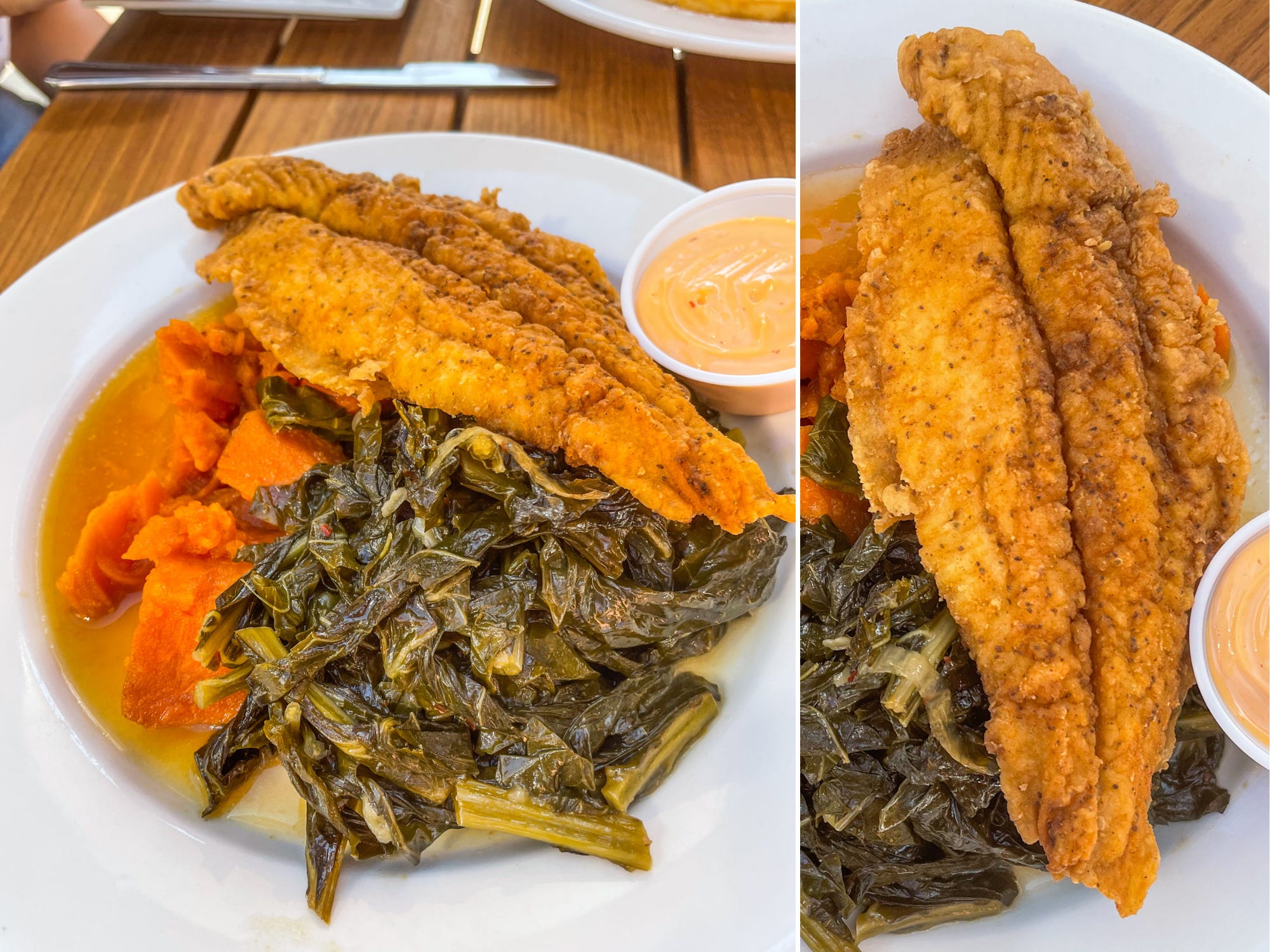 Diving into the sides first, I was hit with a wave of bright flavors.

The greens were soft but held the integrity of their shape and texture. They tasted of mild vinegar and meat-stock, which makes sense because the Melba’s online menu says they’re seasoned with smoked turkey. This dish was a really clear showcasing of flavors that my palate greatly appreciated.

Now, let’s talk about those yams. They were sweet in a flavorful way, as opposed to just being sugared. They were soft enough to evoke memories of mashed sweet potato while remaining firm enough to have that enjoyable, stringy texture.

While I thought each of the three foods on the plate was a star in its own right, the catfish was, after all, the protein. The fish had a thin but substantial layer of crispy, peppery, fried goodness evenly coating its entirety. Served alongside the protein was a small cup of chipotle mayo.

This dish — the fish and both sides — cost me $18.95. If I had gotten separate side orders of yams and greens, they would have been $6 each.

I finished out the meal by digging into the signature chicken and waffles, and they sealed the deal that I’d be back again. 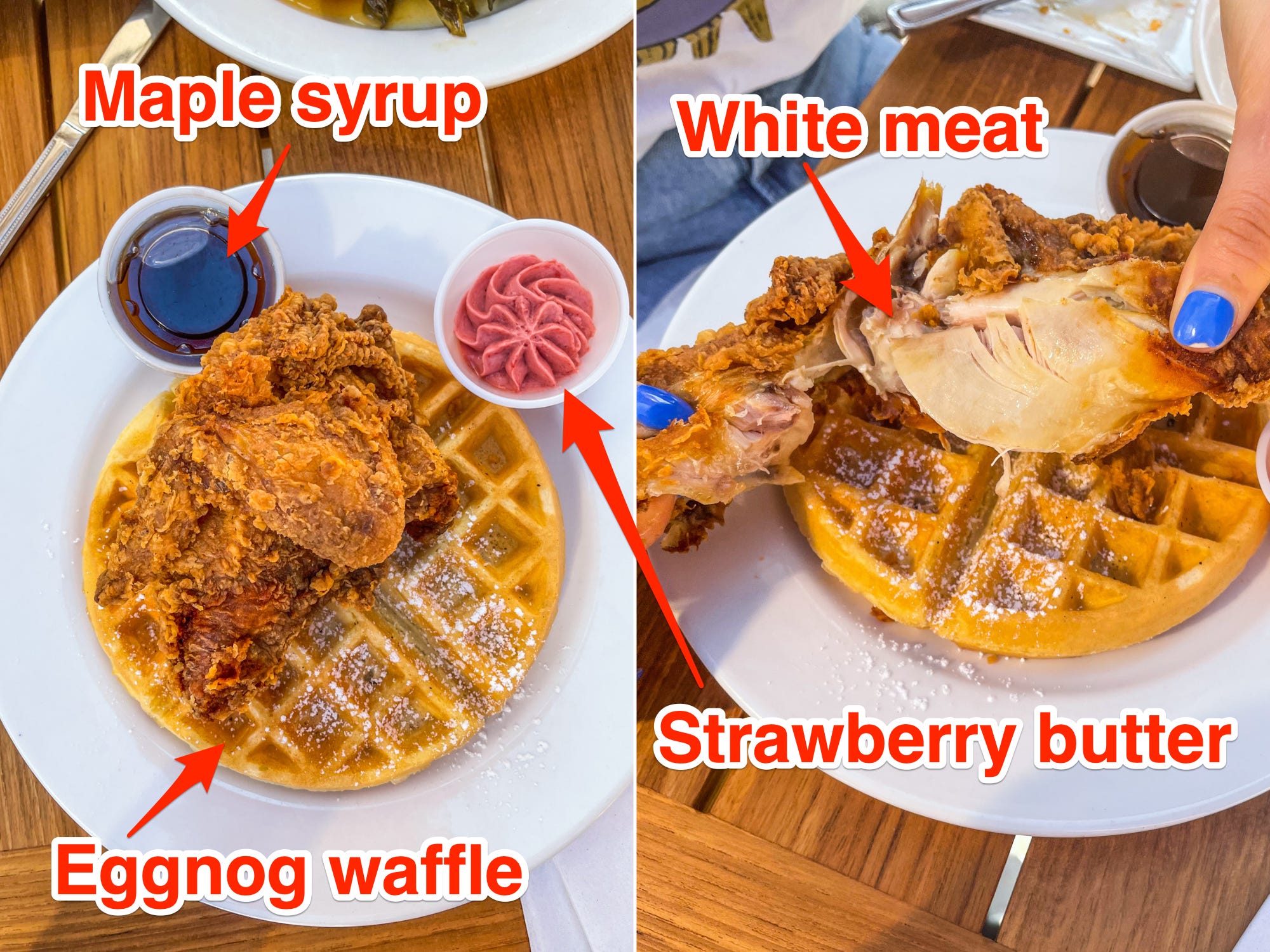 I’ve never had such a flavorful waffle in my life.

When I was debating which cut of meat to choose with my order, the server assured me that the white meat would not be dry. So I took a chance and, unsurprisingly, he was right.

Ripping apart the chicken breast was oh so satisfying. The ripples of fried dredge crackled under my fingers each time I picked up a piece to take a bite — because, come on, this tastes way better as finger food than if you use a fork and knife.

While the coating and meat had flavor on their own, the strawberry butter really got things going. It was super lightweight — lighter than I expected — and was filled with actual bits of strawberries, adding both tartness and texture variety. The dish also came with maple syrup, and while it was a great addition, I’ve never been one to drown anything in the sweet and sticky sap.

Melba’s eggnog waffles were, hands down, the tastiest waffles I’ve ever eaten. In trying a bite on its own, I felt the initial crisp of the outer shell, then the soft pillowiness of the interior, and then I was hit with all the flavor. It was vanilla and autumn spices and the familiar natural sweetness that comes from a thick buttermilk waffle.

While the food alone was reason enough to make a reservation, the service is what helped land this on my recommendation list for out-of-towners. 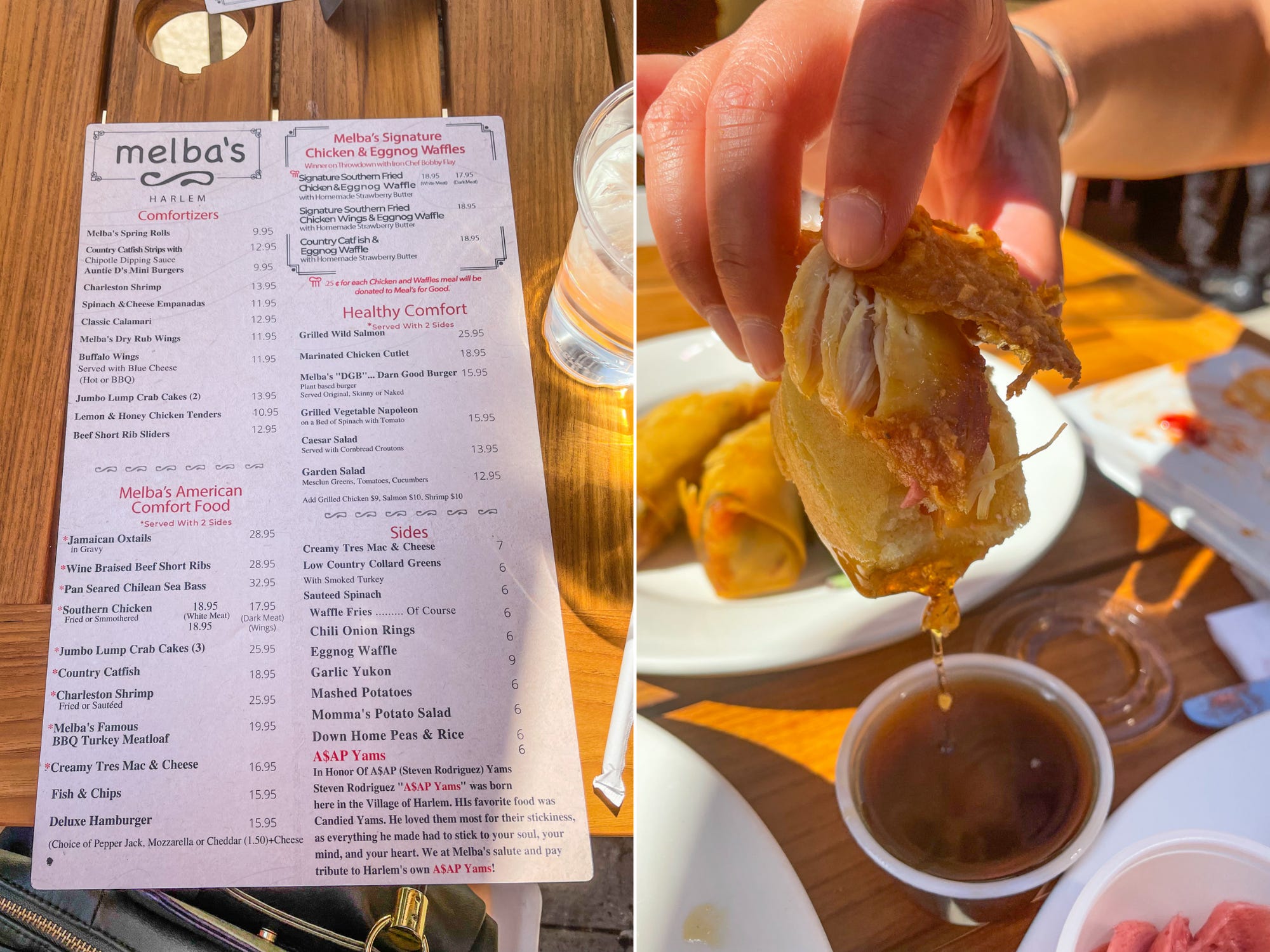 Everything was amazing, even the service.

The restaurant’s website says that “dining at Melba’s is like coming home for dinner, whenever you’re away from home.” I couldn’t agree more.

From the moment I arrived, the staff greeted me with warm smiles, playful jokes, and a realized attitude of “make yourself at home.” I got the feeling that it’s a place where everyone is given the royal treatment.

I wasn’t rushed out of my seat, and I was even offered a takeout box for the mere scraps I had left. I often have to dodge judgemental looks when I ask to take home what is practically a pile of crumbs.

Ultimately, I understand why the Duke and Duchess of Sussex chose to visit Melba’s on their trip to New York. And I think everyone else should, too.

Read the original article on Insider 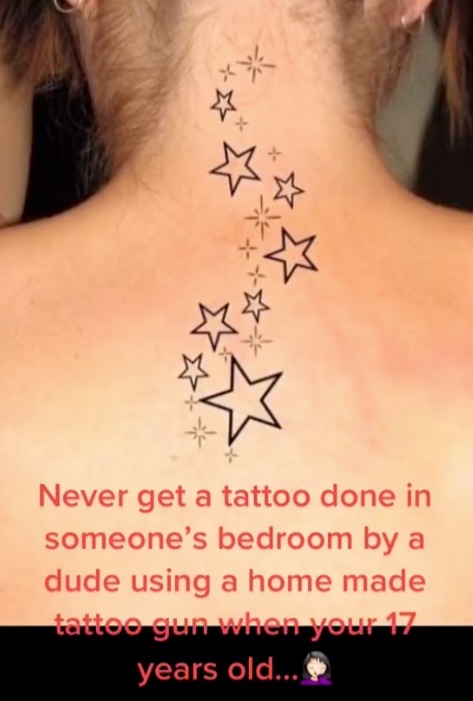 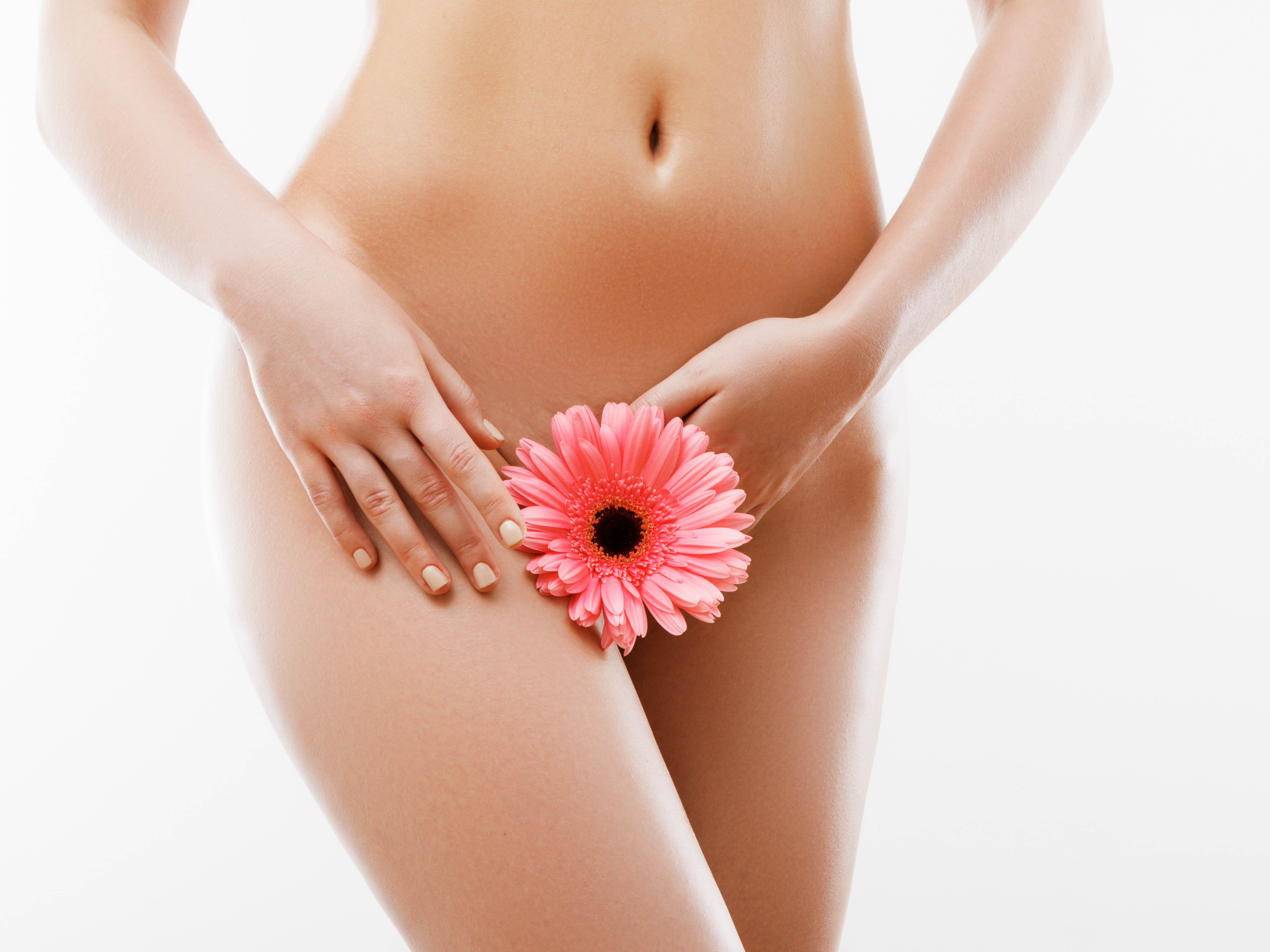 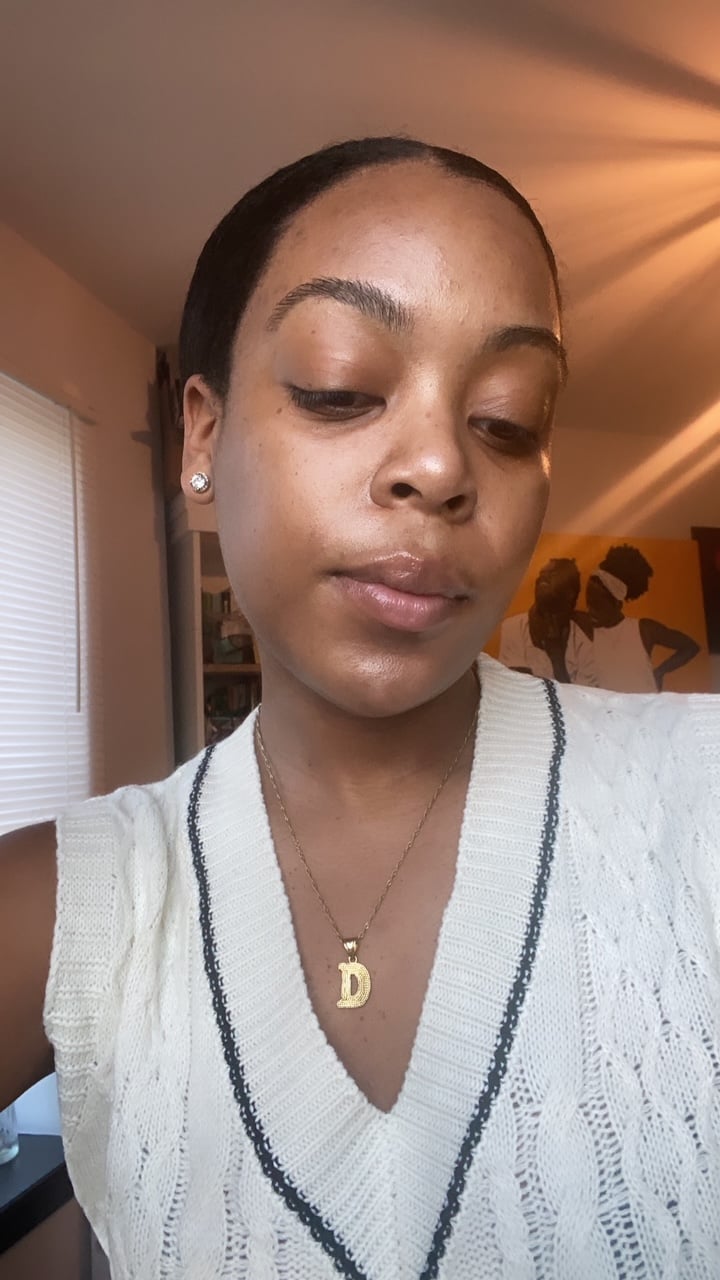 I Tried the Easiest Contour Hack on TikTok: See the Photos

I did a DIY bleach job on my hair… it was a total fail, bits snapped off and now I look like a crazy penguin