FOR some of us, getting a salon treat like laser hair removal goes without a hitch.

For comic Jess Fuchs, 28, it caused the embarrassment of a lifetime.

Sharing her story on Tiktok, where her tale has been viewed over 2.3 million times, the salon receptionist accidentally revealed a little more about Jess’ body than she would’ve liked.

The comedian declared: “I was publicly humiliated at laser clinics Australia,” as she pointed at her background of the clinic.

“Basically to set the scene what happened is in 2020 my parents said what do you want for your birthday?”

“I said well I’ve been flirting with the idea of getting laser.”

Rather lovingly, her parents said: “No worries, consider it done.”

“Now I was talking about just like moustache what happened is wake up on my 27th birthday and I get a package for full body hair removal.”

“It just said on the line from eyebrows down get rid of everything so that was a good start to the birthday.”

“I’ve been using the package for over a year because when you’re jewish it takes 40 days 40 nights 40 years in the desert I don’t know history.”

“Ok now what happened recently to me is I went to get the whole kit and caboodle.” Jess began, saying she got it all done at once.

“I don’t know if other people out there do this but when I book online I book for certain things,” she said.

“I book lip, I book underarm, I book legs, I book the things society lets me book without feeling terrible,” she explained, “but there are add-ons.”

“There are add-ons that we all do but we might not like to talk about it but we do it, we’re there and we’re just like flip over and like hey can you get the back.” Jess revealed to her 15.3k followers.

“Or you know the razor slipped and hit my nipples, can you just while you’re there get the areola.”

“Now she obliges we do the a** we do the nips, we do everything else and when I come out thats the time you set up your next appointment, buy any of the creams that you need, do anything else that might be important and settle your f***ing bank balance, your debts.”

“So I walk out and I’m like thank you so much what do I owe you? Because I had some additions.” Which we know are her intimate areas.

Talking about the receptionist, Jess explained: “She was like yeah we just have to fix up for your areola but don’t worry, in a room full of waiting people.”

In a room full of people she says yes your nipples you’ll need a fix up.”

The comedienne then got distracted by her mum as she re-told the story, saying: “There’s my mum staring at me as I tell you guys this story.”

Back to the receptionist who Jess explains: “She’s like you’ll just need $15 for the areola but don’t worry about the anus darl.”

“Anus is pre paid, you have a pre paid anus.”

“She just kept screaming the phrase pre paid anus in front of everyone.”

Jess then mimicked the receptionist by repeating pre paid anus and typing at an imaginary computer.

“Not to worry darl yeah come back in 8 weeks i’ll put your anus in.”

Tempted to run out the clinic, Jess said: “I’m like don’t put my anus anywhere, don’t pre pay anything let’s just…” as Jess took a deep breath while the embarrassment of the situation overwhelmed her.

As the icing on the cake of the story, Jess said: “My mum sent my dad to go and get the birthday present so my dad pre paid for my anus.”

Jess later commented on her video, saying: “To be clear, I’m a comedian, this is alllll in jest.”

Fans of her funny story flooded the comments in laughing emojis as one couldnt’ hold back laughs, saying: “I lost it when you said your dad is the one who booked it!!! I can’t.”

Others shared their own experiences, saying: “People that work at laser clinics scare me bc they’re all mean girls that peaked in high school.”

One commenter even tagged the clinic and wrote: “I swear all girls that work with you are mean and like embarrassing you ! Cause they think they are higher then everyone else.”

A former employee of the salon chimed in to say: “I used to work there and I feel like it’s just so normalised to the girls that work there that they don’t realise it’s not a normal thing to say.”

Another beautician wrote: “As a practitioner, I consider this confidential protected health information.”

“As a beauty therapist, regardless of the treatment I always just mention the amount owing & when to rebook…nobody needs to know what you’re havin’ omg.” Laughed another in shock.

Many got distracted from the hilarious story by Jess’ choice of top which a few said: ” ’m sorry but I thought you were wearing a medical gown to set the scene haha.”

“I wasn’t concentrating and thought your top looked was a hospital gown, thought you were reporting live from the emergency room,” another concerned commenter wrote.

An empathetic fan wrote: “I’m so sorry that happened to you but your delivery of this story *chefs kiss*”

While another comforted Jess, saying: “To be fair everyone else that heard is probably thinking “I didn’t know that was an option I should get that”

A realist wrote: “I understand your embarrassment but if I was one of the people sitting in it wouldn’t have bothered me overhearing -cuz I’m there for the same Queen.”

“As a Jewish girl that also wants laser hair removal, I can attest to the 40 days and 40 nights.” said a fellow Jew.

One got real, saying: “I agree it’s humiliating but personally I think if im getting my literal hole waxed by some random then who cares about the people in the waiting room.”

“I’m sorry for laughing but ‘prepaid anus’ is TOO MUCH,” shared another. 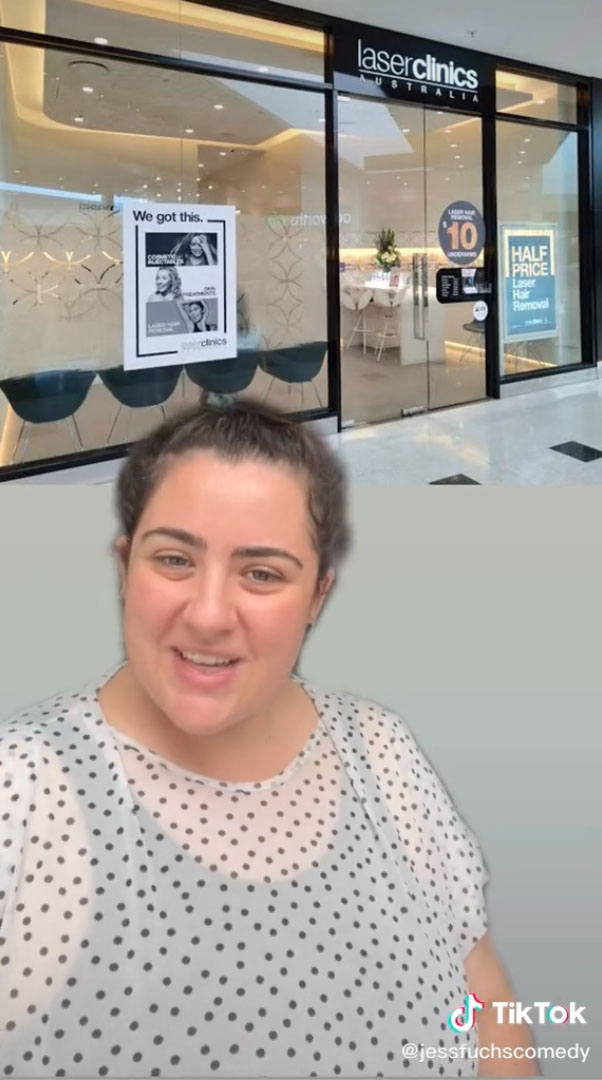 The comic’s parents involvement in the story is what got a lot of peopleCredit: @jessfuchscomedy/Tiktok

For more salon stories, get the inside scoop from the professional waxers and this is what we think when our client is seriously overweight

See how this woman has permanent wrinkles so bad people call me the ‘Poster child for Botox’ but I don’t care, I love how I look

I paid £57 for a cute ear piercing…it went wrong and left me with massive lumps, I forked out £820 to fix them